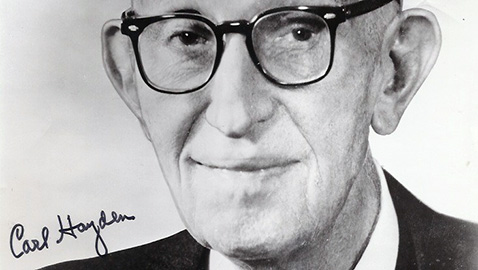 Despite his long Congressional service, Hayden was little known outside of Arizona. Unlike his colleague Henry Fountain Ashurst, Hayden was not known for flights of oratory or speech-making. In fact, Hayden was oftentimes derided as “Silent Carl” for his refusal to speak on the floor of the Senate. Yet, Carl Hayden became one of the most influential senators of his time, especially on those issues that affected his home-state of Arizona. President John F. Kennedy, himself a former senator, pointed out every major issue of importance to the American West, reclamation, power, highways, and irrigation, had been molded in some way by Senator Carl Hayden.

The future senator was born October 2, 1877 in Hayden’s Ferry, Arizona. Arizona was still a territory when Hayden was born and Hayden’s Ferry would become part of Tempe. Hayden’s parents, Charles Trumball and Sallie Hayden, were enterprising people and operated numerous businesses, including a grist mill and general store. Charles Trumball Hayden was also the Probate Judge for the community and active in Democratic Party politics.

Following the death of his father, Carl Hayden sold off some of the family interests to settle debts and moved the family to California so that his sisters could get an education. Carl Hayden’s return to Arizona brought him political success, as he won a seat on the Tempe City Council and later served as the county treasurer. Hayden decided to run for Sheriff, as the office allowed the incumbent to keep a portion of those fees he was able to collect. Hayden enjoyed enormous popularity as the Sheriff of Maricopa County and when he ran for Congress in 1911 as Arizona attained statehood, he managed to defeat two better-known candidates for the Democratic nomination. Hayden came to Congress just after Tennessee’s Kenneth D. McKellar and the two would enjoy a long association in Congress and the United States Senate.

As Carl Hayden began his Congressional service, he began the practices he would follow for the rest of his long career. Hayden worked hard on behalf of his constituents and concentrated on doing things for Arizona and her people. Despite his relative silence and low profile in the Capitol, Hayden was a shrewd and effective politician and kept a close eye on possible competitors. Hayden rarely faced serious opposition in his Congressional campaigns and it was during his time in Congress that he lead the fight in a dispute that would run for fifty years between Arizona and other western states, especially California, over water rights from the Colorado River.

Congressman Hayden was successful in frustrating the efforts of the California Congressional delegation from securing the water rights of the Colorado River, which helped when he challenged Republican Senator Ralph Cameron for reelection in 1926. Hayden defeated Cameron and began his long career in the U. S. Senate. As a member of the Senate, Carl Hayden continued to protect Arizona’s interests, which served him well when former Senator Ralph Cameron was making another of his frequent bids to return to the United States Senate in 1932.

Still, Hayden’s popularity dipped and he only won renomination over several challengers by a plurality of the vote. Senator Hayden himself candidly admitted he very likely could have lost had he only faced a single opponent in the Democratic primary.

Senator Hayden did not underestimate Ralph Cameron’s ability as a vote-getter and noted Cameron was strongly for paying veteran’s a bonus he thought the treasury could ill afford in the midst of the Depression. Hayden beat back Cameron’s challenge rather easily and it would be many years before he again faced another serious opponent in an election.

Hayden was persistent in his efforts to bring more water to the arid Arizona desert throughout his senatorial career and with his reelection in 1938 and 1944, he climbed the Senate’s seniority ladder. Hayden was just behind Tennessee’s Kenneth McKellar in seniority on the Appropriations Committee, which gave him great influence. During McKellar’s sick spells, Hayden would preside over the Appropriations Committee.

Senator Hayden was easily reelected in 1956 to his sixth term in the United States Senate. In 1962 at age eighty-six, Hayden would face a serious challenge from Republican Evan Meachem, who would later be elected governor of Arizona. Like many other aged incumbents, Hayden was not as physically active as he had once been, limiting his ability to campaign. President Kennedy came to Arizona to attend a gala fundraising dinner for the elderly senator and much of Hayden’s campaign was directed by aides who utilized all modern means to bolster the senator’s reelection bid.

Hayden’s Congressional service had lasted so long many of his constituents hadn’t even been born when he was first elected to office. The nature of Arizona politics had been subtly changing through the last decade. Arizona had been a solidly Democratic state for many years, but 1950 saw the election of Republican Howard Pyle as governor. In 1952, Pyle was reelected and a young Republican named Barry Goldwater managed to upset Senator Ernest McFarland, who was the sitting Majority Leader of the U.S. Senate.

McFarland, stung by his defeat for reelection to the Senate, ran against Governor Pyle and beat him in 1954. McFarland was reelected in 1956 and set out to reclaim his seat in the Senate in 1958. Despite being the incumbent, Barry Goldwater was considered the underdog in that campaign and Ernest McFarland confidently expected to once again serve in the United States Senate. 1958 was a very bad year for Republicans all across the country and despite the popularity of President Dwight Eisenhower, the country was experiencing a recession, which badly hurt the candidacies of GOP incumbents. Once again, Barry Goldwater defied the odds and beat Ernest McFarland.

When Senator Carl Hayden sought reelection to a then unprecedented seventh term in 1962, he was facing a revitalized Republican Party and an electorate more sophisticated and independent than ever before.

Hayden was somewhat embarrassed during that year when he and Missouri Congressman Clarence Cannon, Chairman of the House Appropriations Committee, got into a spat over turf. Hayden and Cannon were in a fierce row over where the members of the Senate and House Appropriations Committee members would meet in conference to bring out bills for a vote by the full House and Senate. Naturally, each wanted the committee meetings held in his specific domain.

With both Hayden and Cannon well into their eighties, to most it seemed like a silly fight over territory to most voters. The feud between Hayden and Cannon escalated until unapproved appropriations bills had accumulated to the point of forcing a shut down of government services.

Senator Hayden spent the final part of the campaign in Bethesda Naval Hospital where he was suffering from a viral infection. His condition was so serious it prompted a rumor in Arizona that he had died. The rumor reached the point where it was necessary for Hayden to hold a press conference at the naval hospital, allowing the eighty-six year old senator to show he was still very much alive.

Hayden’s excellent constituent service and his many accomplishments in Congress helped him to win one last term, albeit it by a much closer margin than many had expected.

It was during his last term of office that Carl Hayden achieved what was likely his crowning success as Arizona’s senator. The United States Supreme Court issued a decision that favored Arizona in the continuing fight over water rights in 1963. Senator Hayden quickly reintroduced yet another bill promoting the Central Arizona Project, which had been a focal point of Hayden’s last reelection campaign. Hayden’s considerable influence helped the bill to pass the Senate, but it stalled in the House where the California Congressional delegation fought it relentlessly.

California’s opposition to Hayden’s bill finally diminished once Governor Edmund G. “Pat” Brown said the state should not try and win through legislation what it could not attain through the courts. Even once that hurdle had been jumped, Colorado Congressman Wayne Aspinall, Chairman of the House Interior Committee, proved to be just as formidable an obstacle. Aspinall refused to allow the bill to be heard in his committee, but Carl Hayden proved to be a wily adversary.

Chairman Aspinall returned home to Colorado for an ill-timed vacation and Senator Hayden took advantage of Aspinall’s absence. Hayden added his Central Arizona Project to an appropriations bill as an amendment, which forced Aspinall to hold hearings. The bill was finally signed into law by President Lyndon B. Johnson on September 30, 1968.

Senator Carl Hayden noted he had worked on the bill for decades and considered it his greatest success during his time in Congress. It was a fitting capstone to what was then the longest Congressional career in the history of the United States. Hayden was also retiring that year at age ninety-two. His retirement made way for Barry Goldwater’s return to the United States Senate.

Hayden had hoped to see his longtime Administrative Assistant Roy Elson take his place, but Elson lost to Goldwater who remained highly popular in Arizona. Hayden returned home to Tempe and occupied an office inside the library at the University of Arizona named for his father, Charles Trumball Hayden.

Hayden spent the years remaining to him researching the lives of Arizona pioneers, as well as compiling a biography of his father. Carl Hayden’s health finally began to deteriorate and he died on January 25, 1972.

Carl Hayden’s life was inextricably intertwined with that of Arizona and he was lamented by the state’s political elite, including Senator Barry Goldwater who liked and admired the old senator.

Hayden’s legacy was honored by Arizona and there are any number of things named for the late senator, including a high school. Carl Hayden’s record for length of service was broken only by that of West Virginia Senator Robert Byrd in 2009.