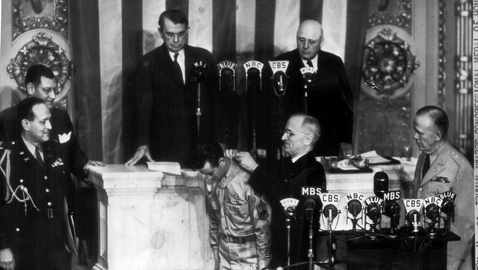 Jake Lindsey epitomized much about how Americans saw themselves when he joined the army in February of 1940.  Lindsay, a resident of the tiny hamlet of Lucedale, Mississippi, joined the armed forces well before the Japanese attacked Pearl Harbor.  The nineteen year-old Mississippian would go on to become one of World War II’s most notable heroes and win the highest military decoration our country can bestow upon our warriors.  Lindsey’s feats would rival those of Tennessee’s own native son, Sergeant Alvin C. York.

Lindsey’s exploits earned him the nickname the “One Man Army.”  Jake Lindsey belonged to a platoon of forty men that had dwindled down to six within a matter of days during bloody fighting in the Huertgen Forest near Hamich, Germany.  Despite its depleted numbers, Lindsey’s platoon managed to occupy its objective, but quickly faced a counterattack by the Germans.  The German infantry was supported by five tanks and Jake Lindsey had suffered a painful wound to one leg.  Lindsey put up a savage resistance to the German counterattack, killing at least twenty Germans and disabling one of the panzers.  Using only his rifle and hand grenades, Lindsey beat back the Germans three times.  Lindsey took out two machine gun nests and fought hard enough to cause the German tanks to withdraw.  Watching as the Germans attempted to reform the machine gun positions and out of ammunition, Lindsey attacked with his bayonet, killing three Germans, capturing three more, while two fled.  Initially, Sergeant Lindsey was reported to have been killed during the skirmish.

Lindsey’s bravery and heroism was noticed in Washington, D. C. by Secretary of War Henry Stimson.  A former Secretary of State under President Herbert Hoover, Henry Stimson had been lured back into public service by the late Franklin D. Roosevelt, who had sought to make his own Cabinet more bipartisan as war approached.  Stimson was a Republican and had joined FDR’s Cabinet, along with GOP newspaper publisher Frank Knox, who accepted Roosevelt’s offer to become Secretary of the Navy.  Stimson remained in President Harry Truman’s Cabinet after Roosevelt’s death April 15, 1945.  Secretary of War Henry Stimson had first believed Jake Lindsey would have to be awarded the Medal of Honor posthumously.  To his delight, as well as that of Jake Lindsey’s relieved family and friends, Stimson decided to confer the Medal of Honor on the very much alive Sergeant Lindsey.  When making the announcement Jake Lindsey was to be awarded the Medal of Honor, Secretary Stimson used the occasion to remind reporters of the names of other recipients: Kelly, Bianchi, Martinez, Sadowski, Baker, Tominac, Bjorkland, Wierdorfer, Fournier, Lopez, Thompson, and Smith.  “They are these United States,” Stimson said.  The Philadelphia Inquirer enthused about the Secretary pointing out heroism was not confined to any one heritage.  “These farm boys, garage mechanics, lathe hands, clerks, elevator boys, are the soldiers who smashed the flower of Hitler’s armies.”  The Inquirer editorial posed the question: just what made the American soldiers “such splendid fighters”?  It was not merely training nor equipment, the Inquirer noted, as the Germans had both in full measure.  The Inquirer believed it was “something else – – – the spirit of America – – – which leaves a man, or a boy, even in uniform, to be himself, to be fighting for the things he loves, such things as the kind of liberty a man uses for himself in his daily life and will let no one take from him.”

It was not long before the sergeant was summoned to the Capitol for a special ceremony by the Commander-in-Chief, President Harry S. Truman.  Jake Lindsey almost didn’t make it to his own ceremony.  The Army was hurriedly flying the Mississippian home the weekend before the ceremony scheduled on the next Monday.  President Truman’s press secretary, Charlie Ross, told reporters he was uncertain whether the ceremony would be broadcast, or even if it would be held at all, as there was a possibility Sergeant Lindsey’s plane would not touch down before the scheduled ceremonies.  Asked by a reporter what would happen should Jake Lindsey be delayed, Ross replied President Truman would wait on the sergeant.  Mississippi Congressman William Colmer dismissed concerns about Lindsey’s flight being delayed, saying, “This distinguished young Mississippian will be here on time.”  Colmer had helped to make arrangements for Lindsey’s parents and sister to come to Washington, D. C. to see their son and brother honored.  “In honoring this Mississippi boy,” Colmer said, “The nation, through its President and its Congress, is honoring the entire American Infantry, which has played and is playing such a wonderful role in the subjection of our enemies.”

Before a joint session of Congress, the boy from Lucedale entered the House of Representatives at the side of General George C. Marshall.  Both General Marshall and the slim boy from Mississippi wore summer khaki that day in May.  As they mounted the Speaker’s dais, General Marshall leaned in and whispered a few words of encouragement to the twenty-four year-old sergeant.  Wearing a serious expression, Lindsey shot a brief glance to his mother and father, who were sitting on a front row with the members of Truman’s Cabinet.

Jake Lindsey stood modestly as his appearance was greeted by “rebel yells” from proud Southern congressmen.  The dais was occupied by Speaker of the House Sam Rayburn of Texas and Tennessee’s Senator K. D. McKellar, who was President Pro Temp of the United States Senate.  President Truman marched up the dais and shook hands with Sergeant Lindsey and General Marshall.

It was General Marshall who read the official citation.  “For gallantry and intrepidity at the risk of life above and beyond the call of duty on November 16, 1944, in Germany.  Technical Sergeant Lindsey led his platoon reduced to six from its original strength of 40 . . . intense enemy counterattack . . . exposed to heavy machine guns, rifle and tank fire . . . knocked out two machine guns . . . although painfully wounded, he engaged eight Germans . . . hand-to-hand combat . . . fearlessness . . . fighting courage…”  It was an emotional moment for most everyone in the House Chamber; Sergeant Lindsey’s mother wiped tears from her eyes as General Marshall read the citation; so did Senate Majority Leader Alben Barkley.

Standing at attention, Lindsey relaxed momentarily to stoop forward to make it easier for President Truman to slip the band of pale blue silk holding the Medal of Honor around his neck.  Jake Lindsey was the two hundred and twenty-third man to win the Medal of Honor during World War II and the one hundredth infantryman to win the honor.  Truman was quick to remind the assembled congressmen the Medal of Honor was only awarded to those who had demonstrated “gallantry at the risk of life beyond the call of duty.”

“They were a flash of the nobility which we like to think is a part of every American,” Truman explained.  “They were the unselfish valor which can triumph over terrible odds.  They were the very essence of victory.”

Truman had chosen to honor Jake W. Lindsey at a joint session of Congress because he believed it was important to honor an infantryman.  “There is little glamor in hi service,” the President confessed.  “He faces not only the enemy before him, but the cold and the heat, the rain and the snow, the dust and the mud, which so often make his life miserable.  These things he endures, and rises above them to such deeds as we celebrate today.”

As Truman spoke to the joint session of Congress, the war in the Pacific still raged against the Japanese Empire.  The President pledged to Congress, “Before the battle against Japan is won, we shall have other men to honor – – – men whose deeds, like those we celebrate today, will have brought closer our inevitable victory.”

President Truman placed the ribbon around Jake Lindsey’s neck and then walked around behind the sergeant to fasten the clasp.  Pleased, the President “clapped the young hero on the shoulder.”  Jake Lindsey stood at attention and gave Truman “a snappy salute.”

The ceremony lasted only about fifteen minutes and the President escorted Jake Lindsey to a private dining room where the sergeant was the honored guest at a luncheon with congressional leaders.  Lindsey revealed a private conversation with Truman, who was a veteran of World War I, who told the sergeant, “I’d rather have that medal than be President of the United States.”

That summer, Lindsey briefly left the Army after being discharged.  Greeted by someone as “Sergeant Lindsey”, the young Mississippian replied, “No, sir, it’s not Sgt. Lindsey anymore and I love it.  No more reveilles, no more formations – – – it’s sure great to be a civilian again.”  Lindsey did not remain out of uniform for very long.

One of the more unusual duties awaiting Jake Lindsey after the ceremony in Washington was answering the “mountain of mail” that had accumulated in the days following his visit to the Capitol.  Lindsey had been provided a secretary and private office from R. B. Chandler, publisher of the Mobile Press-Register.  The modest young man from Mississippi experienced the life of a celebrity for weeks and months following being awarded the Medal of Honor and was somewhat overwhelmed by his new responsibilities.  Lindsey had forgotten he had to be in New Orleans, wailing, “I’ve got to be in New Orleans.  I’ve gotta go.  I’ll be back after I open that airline service in Chicago.”

Lindsey had also yet another new responsibility, as he had married Beverly Hargreaves of Lexington, Massachusetts four days earlier, whom he had first met on a blind date in 1941.  As he left his office, Jake Lindsey cried, “I’ll be back in a few days.  Save my place and we’ll finish those letters.”

Lindsey’s heroism was not confined to World War II.  When the Korean War broke out, Lindsey was back in uniform and lived up to his epithet of being a “One Man Army.”  According to some military historians, Jake Lindsey killed as many as 150 Chinese in a single night.  Wounded twice in World War II, once at Omaha Beach and in Sicily, Jake Lindsey displayed the same kind of courage in Korea.  While scaling a cliff to reach a machine gun nest, a Chinese soldier attempted to kill Lindsey by dropping a grenade on him.

Leaving Korea and returning to the United States via Germany, the thirty-three Lindsey gave up his lieutenant’s bars, which he had worn for the last two years.  “I’m just a sergeant at heart,” Lindsey said.  “I just think I can do a better job in the Army as a sergeant.  I talk like a sergeant.  If you are an officer, that kind of talk don’t go with recruits in the new Army.”  After the Korean War, Lindsey had commanded an infantry platoon in Germany.  Lindsey had resigned his commission as a lieutenant and immediately reenlisted as a sergeant.

Lindsey expressed the hope he could serve with paratroopers after returning to the states.  Lindsay’s reenlistment was threatened when a routine physical revealed he might have diabetes.  Eventually, army brass decided the diagnosis should not apply to a Medal of Honor recipient.

Jake Lindsey did not fight in Vietnam, but trained GIs from the 101st Airborne Division Army Rangers.  Eventually Lindsey retired from the Army and spent a decade working for the U. S. Forestry Service.  Jake Lindsey retired to Waynesboro, Mississippi, surrounded by family.  The sixty-seven year-old hero was finally felled by a heart attack at his home.