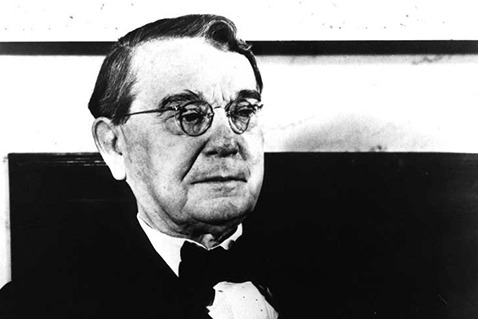 Senator McKellar vs the CIO-PAC

Tennessee’s senior member of its congressional delegation was Kenneth D. McKellar, who had been in Congress for a total of thirty-six years; thirty of those years in the Senate. McKellar had just been handily reelected to another six-year term in the United States Senate in 1946. Contrary to revisionist historians, McKellar had long been one of the Senate’s more progressive members. A newspaper in Columbia, Tennessee, had accused McKellar of being all but a socialist, while the New York Times had labeled the Tennessean one of the Senate’s most progressive members during the decade of the 1920s. McKellar was one of the very few senators who stuck with Franklin D. Roosevelt to the bitter end in the president’s failed attempt to pack the Supreme Court of the United States. Senator McKellar’s falling out with TVA board member David Lilienthal made the Tennessean a target for liberals in his later years.

McKellar had been an ally of organized labor throughout his congressional career, yet the CIO got cross-ways with the crusty senior senator during the 1946 election. A new CIO-PAC set out to topple the venerable Tennessean from the Senate by supporting his opponent in the Democratic primary. Edward Ward “Ned” Carmack was the undistinguished son of a distinguished father of the same name. The younger Carmack was erratic and for a few years represented a threat for a myriad of elected offices. Carmack finally ran against Tennessee’s junior U.S. senator, Tom Stewart, in 1942 and quite nearly beat the incumbent. Heavily promoted by the Nashville Tennessean newspaper, Carmack plunged into the 1946 primary against the formidable McKellar. It soon became quite clear the newly created CIO-PAC intended to oppose Senator McKellar. Some organized labor leaders referred to the new CIO-PAC as “the most important movement in the political history of Tennessee.” The CIO-PAC representative for the Southeastern United States was Paul Christopher, a diminutive, black-haired labor organizer from Knoxville, who was something of a firebrand. President Harry Truman was threatening to veto the 65 cents an hour minimum wage bill because of a farm parity amendment which had been placed upon the legislation. Christopher told his fellow union members, “I have a story to tell you . . . a story of which I am not proud,” he said solemnly. Paul Christopher said “one of our senators” had “contributed to the present sorry plight” of the minimum wage bill. Christopher accused McKellar, in his capacity as president pro tempore of the Senate and its presiding officer, of not having recognized Senator Claude Pepper of Florida, the author of the minimum wage bill. According to Paul Christopher, McKellar had instead recognized Senator Richard Russell of Georgia, who was the sponsor of the dreaded farm parity amendment. Of course Christopher ignored the fact both Georgia and Tennessee were at the time largely rural states with considerable farming interests.

The peppery McKellar refused to take dictation from the CIO or anybody else. The senator issued his own fiery statement in response to that of the PAC. The Nashville Banner carried a headline running across the top of the newspaper blaring, “McKellar Spurns PAC Conference Proposal.”

Replying to a letter from R. H. Routon, chair of a CIO-PAC subcommittee, who had suggested the senator meet with PAC members to talk about the primary campaign, McKellar held nothing back. “I see no need for a conference between us,” McKellar’s reply stated. “Your platform is already made and so is mine.”

The senator complained he had been “traduced and abused” by the CIO-PAC who McKellar charged had made “malicious, false, and misleading” statements during the PAC convention in Chattanooga earlier in April. “Your organization states that it has 75,000 voters in Tennessee,” Senator McKellar wrote. “The inference . . . is a threat that you are strong . . . that I had better come down and deal with you . . . when your organization is already working against me.”

McKellar pointed out in his letter to Routon it had been made clear the CIO-PAC intended to “tax your members a dollar each or in all about $75,000 largely to be used in an effort to defeat me in the coming primary.” “I noticed in the paper also that you had one of my opponents to spend the night with you in Memphis last week,” the senator added.

“I have never been nominated or elected by making deals with groups of voters,” McKellar told Routon. McKellar insisted his record reflected he had voted for “more laws having for their purpose the betterment of labor than perhaps any other Senator.” The senator was careful to say that his rejection of the invitation for a meeting did not mean “I do not want every laboring man’s vote.” McKellar wrote he was certainly a “friend of labor” and the senator believed “the rank and file of your organization would vote for me if left alone.”

Nor did McKellar fail to hit his primary opponent Ned Carmack, telling Routon, “If he makes an agreement with you to favor your Communistic, Socialistic and other ‘pink’ policies he will have changed a great deal since I talked to him regarding national affairs when he was seeking favors from me.” “I am not a Communist; I am not a Socialist,” McKellar thundered in his letter. “I am a Democrat with a record. . .”

Senator McKellar released his letter to newspapers throughout Tennessee and it had the intended effect, receiving statewide coverage.

McKellar’s stance was praised by many of Tennessee’s daily newspapers. The Bristol Herald Courier intoned, “We believe the people of Tennessee and of the entire country applaud the position taken by Senator Kenneth McKellar when he declares in effect that he will not be dictated to or pushed around by the Political Action Committee of the Congress of Industrial Organizations.” The editorial noted the CIO-PAC “exists, as its name implies, for the purpose of furthering the plans and purposes of the big labor organizations which it represents through political action.” The newspaper acknowledged it was “quite in keeping” with the CIO-PAC to invite the senator to meet with Chairman R. H. Routon to discuss the issues in the primary campaign. Yet it was also “quite in keeping” with Senator McKellar’s “principles that he should tell the CIO-PAC that he does not desire its support if, in order to secure it, he must sacrifice any principle in which he believes or make any compromise with his conscience.” The Bristol Herald Courier said McKellar was certainly a friend of labor and the working man, although some “labor groups have wandered off after strange gods.” The editorial concluded, “If Mr. McKellar would rather not have the Senatorial nomination than make a deal with the CIO-PAC, perhaps most of the people of Tennessee would rather not have a Senator than one who would make such deals.”

James G. Stahlman, publisher of the Nashville Banner, published a front page column strongly supporting the senator’s stance and attacking the CIO-PAC. Stahlman readily admitted his newspaper had not always agreed with McKellar, but also added, “The Banner respects McKellar’s honesty, his courage, his unflagging devotion to Tennessee’s every interest.” The publisher wrote the Banner “loved” McKellar for the enemies the senator had made in standing up for his people. Stahlman wrote the Banner was for McKellar, “To the last ditch” and the newspaper wasn’t going to “pull any punches when the going gets tough.”

In the middle of McKellar’s spat with the CIO-PAC, the senator was honored by the Tennessee Society of Washington, D.C. As the Knoxville Journal indicated, “Cabinet members and congressional leaders joined with Tennesseans in honoring the Senate’s presiding officer and member with the longest period of service. . .” The master of ceremonies for the evening was Attorney General Tom Clark (later a justice of the U. S. Supreme Court) and President Harry Truman “dropped in” at the lavish dinner held in the grand ballroom of Washington’s elegant Mayflower Hotel. Photographers snapped pictures of the president and Senator McKellar shaking hands, which were plastered all across newspapers throughout Tennessee the following day.

Truman greeted McKellar playfully as “Mr. President” (as presiding officer of the United States Senate) and said he was just going by the Mayflower Hotel when he heard about the party and thought he might drop in. President Truman jokingly congratulated the seventy-seven-year-old senator on his “eighteenth birthday.” Several members of Truman’s Cabinet were in attendance including Secretary of Labor Lewis Schwellenbach (a former senator), Secretary of Agriculture Clinton Anderson (a future senator), Secretary of the Treasury Fred Vinson (a former congressman and future chief justice of the U. S. Supreme Court), and Secretary of the Interior Julius Krug. As President Truman, Senator McKellar and Attorney General Tom Clark posed for photographers, Senator Tom Connally of Texas bawled, “Goodbye Carmack!”

H. Crump, the leader of the Shelby County political organization, had blasted Carmack earlier in the campaign. Crump’s scathing denunciation of Carmack was especially telling as it pinpointed much of the challenger’s failings. Indeed, Crump bluntly summarized Carmack as “a failure.” The Memphis Boss sneered Carmack was nothing more than the candidate of Silliman Evans, publisher of the Nashville Tennessean, a charge that was true. “Carmack sailed under the banner of his father before, and this time he sails under the banner of the Nashville Tennessean,” Crump chortled. “That paper tried to get ex-Governor Browning to run, then they tried Congressman Kefauver.”

“He was a failure as a lawyer, failure as a newspaper man; too heavy for light work, and too light for heavy work,” Crump snapped.

McKellar’s refusal to meet with the CIO – PAC had its effect and Carmack tried to blunt the damage through the Tennessean. “I have made no such tie-up. I have made no deals with anyone in this campaign,” Ned Carmack insisted. The truth, at least according to Carmack, was “dew-drop clear.” The challenger charged Senator McKellar “has shown a tendency to turn ‘pinkish’ more than I have. . .”

The heat in Tennessee came less from the campaigns in 1946 than Mother Nature. Although McKellar had toured much of the state at the beginning of 1946, the senator remained preoccupied with his duties in Washington as he prepared to run on a “coalition ticket” with Governor Jim Nance McCord and Andrew “Tip” Taylor. There were periodic announcements McKellar intended to come home to campaign, but the summer heat was blistering that year. The senator never did make it back to Tennessee to campaign personally. Surrogates and Ed Crump largely carried the senator’s campaign for reelection inside the Democratic primary. McKellar swept Republican East Tennessee where he had always been popular. Senator McKellar easily carried each of the four big urban counties. In his home of Shelby County, the senator won better than 90% of the vote. Ned Carmack fared far better in Middle Tennessee where the Tennessean was widely circulated. Still, Senator McKellar won quite nearly 62% of the ballots cast without once ever returning home to campaign against an opponent who had almost beaten his junior colleague four years earlier.

Kenneth McKellar continues to hold the record in the Volunteer State for length of service. McKellar served forty-two years in the House and Senate.