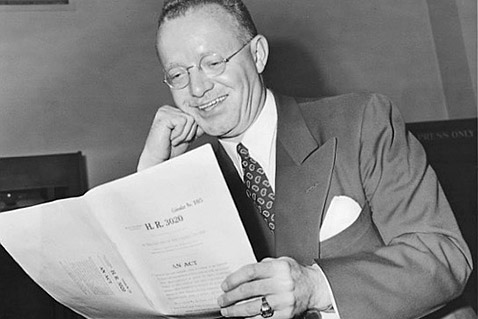 Tennessee and Right-to-Work: The Tennessee Congressional Delegation and the Taft-Hartley Bill

By Ray Hill
The 1946 election saw a Republican electoral tidal wave.  The Chairman of the Republican National Committee was a Tennessean, Congressman Carroll Reece.  The Republicans campaigned in the midterm election on a simple yet astonishingly effective slogan: “Had Enough?”  It referred to those deprivations and sacrifices suffered by the American people since the beginning of the Second World War.  Americans were restive and uneasy.  President Harry Truman was unpopular; inflation was steadily rising and there was considerable labor unrest throughout the country.  Many of the controls on the economy which had been imposed during the war remained in place and the people were tired of them.  Voters wanted change, a feeling the Republican National Committee and Carroll Reece adroitly used to change control of Congress.

The Republicans wasted little time in carrying out their legislative agenda, which included a major cut in taxes.  The GOP majorities also gave congressional approval to the 22nd Amendment to the Constitution of the United States, which limits a president to two terms.  The GOP majority was also successful in forcing Truman to end those remaining economic regulations put into place during the war.  The Republican Congress passed the National Security Act of 1947, which established the United States Air Force, changing the old War Department into the more modern entity of the Department of Defense.  That same act also created the National Security Council and the position of National Security Advisor to the President, as well as the Central Intelligence Agency.  It was also the Republican Congress that approved the Marshall Plan (named for Secretary of State George Marshall), as well as providing aid to Greece and Turkey to prevent the spread of Communism and institute an American policy of containment.  Yet perhaps the legislation the 80th Congress was most identified with was the passage of the Taft-Hartley Bill, which was written precisely to address much of the labor unrest in the country.  Ironically, one can easily make an excellent argument the Republican Congress, by eliminating much of the high taxes (some taxpayers were in the 90% income tax bracket), the bureaucratic regimentation imposed during World War II and taming out-of-control unions helped to alleviate much of the public’s unhappiness with Harry Truman prior to the 1948 presidential election.

The Republican sweep did not affect the statewide elections in the Volunteer State.  Seventy-seven-year-old Kenneth D. McKellar had easily dispatched a formidable opponent in the primary in 1946 without once coming home to campaign.  Nor did the senator much bother to campaign hard in the general election.  McKellar won better than 66% of the vote against GOP nominee William Ladd.  Ladd tallied little better than 26% of the ballots cast and two Independents polled slightly more than 6%.  McKellar had been in the United States Senate for thirty years and Congress for thirty-six.  During the time K. D. McKellar had been in office, he had served with seven other men who represented Tennessee in the Senate.  Tennessee’s junior United States senator in 1947 was Tom Stewart of Winchester.

The Volunteer State was represented by ten members in the U. S. House of Representatives.  Dayton Phillips was a freshman member of Congress representing the First District when longtime congressman Carroll Reece had not run again in 1946 to concentrate upon his duties as Chairman of the Republican National Committee.  John Jennings, a Knoxville attorney and former judge, represented Tennessee’s Second Congressional District.  Both Jennings and Phillips were Republicans, while every other member of Tennessee’s Congressional delegation was a Democrat.  Estes Kefauver, a young and highly ambitious congressman from Chattanooga, represented the Third District.  Albert Gore represented Cordell Hull’s old Fourth District in the House of Representatives.  Joe L. Evins, a returning veteran from World War II, was also a freshman member who had ousted incumbent Harold Earthman in the 1946 Democratic primary.  J. Percy Priest, a former reporter for the Nashville Tennessean, represented Tennessee’s “Hermitage District” in the House.  The largely rural Seventh District was represented by Wirt Courtney, a veteran and former jurist who had first been elected as a supporter of Franklin Roosevelt and the New Deal.  Tom Murray, a portly, white-haired former district attorney was the congressman from the rural Eighth District, which contained Murray’s hometown of Jackson.  Murray was probably the most conservative Democrat of Tennessee’s Congressional delegation.  The Ninth District was perhaps the most rural of all the West Tennessee congressional districts, a collection of counties with small towns and hamlets.  The congressman from the Ninth District was Jere Cooper, a high-ranking member of the powerful Ways and Means Committee who had been in the House of Representatives since 1929.

The Volunteer State’s Tenth District was comprised of Shelby County, the political domain of E. H. Crump of Memphis.  Crump and Senator McKellar were political partners and warm personal friends.  Crump’s emissary to the U.S. House of Representatives was Clifford Davis, who had first been elected to Congress in a 1940 special election.

As Congress considered the pending Taft-Hartley Bill, muckraking columnist Drew Pearson, who had a well-deserved reputation for never allowing facts to get in the way of a good story, reported The American Federation of Labor’s Executive Council attempted to sway the votes of several U.S. senators through a dinner held at Washington’s elegant Carlton Hotel.  William Green was one of the two most prominent leaders of organized labor in America, the other being John L. Lewis, the voluble president of the United Mine Worker’s Union.  Green had taken over the presidency of the AFL following the death of Samuel Gompers in 1924.  It was Bill Green who started the informal discussion with senators during the AFL’s dinner at the Carlton.  The labor leader ticked off those things he perceived to be flaws in the Taft-Hartley legislation.  George Meany, a future president of the AFL and then secretary-treasurer, wondered why it was necessary for Congress to pass such a “tough crackdown on labor.”  Among the senators dining that evening with the AFL Executive Council were James Murray of Montana, Harley Kilgore of West Virginia, Glen Taylor of Idaho, and Claude Pepper of Florida, all of whom were liberal Democrats.  Murray and Kilgore both represented states where mining was big business and a major industry; both Montana and West Virginia had strong labor movements.  Senators Kilgore and Murray stated they strongly opposed the passage of the Taft-Hartley Bill.  So, too, did Glen Taylor and Claude Pepper.  Three Republicans attending, Harry Cain of Washington State, Guy Cordon of Oregon and Homer Ferguson of Michigan, all pointed to the rash of strikes that had occurred throughout the country and said it had to stop.  The Republicans insisted Taft-Hartley represented the will of the American people.

Bill Green retorted President Woodrow Wilson had stopped similar strikes by appointing a committee of management and labor members to study “industrial unrest” and report back with recommendations to solve the problem.  “Labor would welcome an investigation like that now,” Green told his guests, “based on fair-minded findings, with all sides represented.”

John L. Lewis, the formidable, verbose, and bushy-browed former president of the Congress of Industrial Organization and leader of the UMW, perked up as Green addressed the senators.  Green was telling the senators should Taft-Hartley pass, it would create a system of “government by injunction.”  Lewis, who knew as much or more than most citizens about court injunctions, spoke in his deep voice and with perfect diction.  “It is necessary to cope with the economic and social ills of the country first before you can remedy the conditions that lead to strikes,” Lewis intoned.  “What we need is an adjustment of living costs and wages instead of an anti-strike bill.”

Senator Allen J. Ellender of Louisiana, once an important cog in the machine of Huey Long, spoke up, refuting the idea senators wished to revive “government by injunction.”  “No, we are not anxious to bring it back,” Ellender insisted, “but we need some such power to deal with emergencies.  Strikes that affect public health and welfare, particularly those that occur in public utilities, have got to be stopped by injunction or some other means.  Whatever the means,” Ellender growled, “they have simply got to be stopped.”  Needless to say, Senator Ellender was an avid supporter of the Taft-Hartley Bill, as were many of his fellow Democrats.

Joe Padway, the lawyer for the AFL and their general counsel, retorted there were already more than enough “laws on the books” to resolve labor troubles.

If anything, Congressman Fred Hartley’s bill in the House of Representatives was much stronger than that of Senate sponsor Bob Taft.  Hartley’s bill abolished the present National Labor Relations Board and replaced it with a three-person body composed of labor and management.  The new board would have the authority to certify unions as possessing the right to collective bargaining agents on behalf of workers.  The board, under Congressman Hartley’s bill also gave the new board the right to hear and judge charges of unfair labor practices.  The Hartley Bill created the position of the Office of the Administrator of the National Labor Relations Act, who was empowered to investigate all cases involving alleged unfair labor practices and to prosecute them before the full board.

The Hartley Bill outright forbade the signing of a closed shop contract where an employer had agreed to hire only union workers.  Instead, an employer who was willing to have a union shop contract was allowed to sign such an agreement after a majority of his or her employees had voted by secret ballot to express their desire for it.  The new board envisioned by Fred Hartley could issue a “cease and desist” order in the event a union attempted to coerce an owner to sign a contract through a strike.  The “cease and desist” orders could be enforced by an injunction from a court and could revoke the union’s Wagner Act rights for one year.  Closed shop contracts would exist for only six months following the passage of the Hartley Bill.

As to industry-wide bargaining, the Hartley Bill prohibited one union from being the representative of employees of “competing employers.”  The new board under the Hartley Bill was not permitted to certify any union as a collective bargaining agent should any of its national officers be members of the Communist Party or “by reason of active and consistent promotion or support” of Communist policies which could “reasonably be regarded” as being a member of the Communist Party.

The Hartley Bill included a provision relating to the health and safety of the American people.  The president would have the authority to seek an injunction from a court through the attorney general for relief against any strike in “transportation, public utilities, or communications” should the stoppage of work threaten public health or safety or the public welfare.  The court injunction would be good for 75 days, giving the U.S. Conciliation Service and a three-member delegation to investigate the facts and try to settle any dispute.  At the end of the 75-day period, workers could vote by secret ballot to persist in striking and the injunction would be lifted.

The path to passage for the Taft-Hartley Bill promised to be a difficult one.