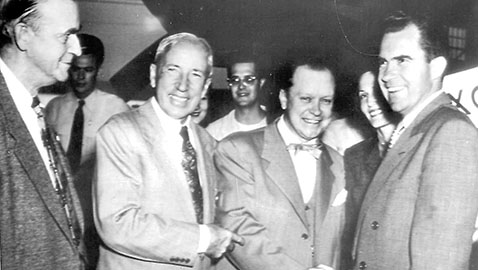 “Tennessee is a narrow ribbon of real estate stretching from North Carolina to the Mississippi.  Tennessee’s far western counties are but northward projections of Mississippi; its eastern mountain counties share both the topography and spirit of western North Carolina and southwestern Virginia.  Between West Tennessee and East Tennessee lies Middle Tennessee, a fertile bowl whose principal city is Nashville.  To the problems of political management inherent in three distinct geographical sections are added patterns of political behavior deposited by the Civil War.”

During the decade of the 1920s was when Republicans had seen some notable electoral successes.  The highwater mark had been the election of 1920 when the GOP had captured the governorship and five out of ten Volunteer State congressional seats, as well as having carried the state for Republican presidential nominee Warren G. Harding.  Tennessee Democrats were both shocked and appalled by the GOP success in the 1920 election which had even unseated Congressman Cordell Hull from a safely Democratic district.  1922 saw the Democrats defeat Governor Alf Taylor and Senator Kenneth McKellar easily beat Republican Newell Sanders, who had served a brief term in the United States Senate by appointment.  Democrats also won back three of the five congressional seats won by the Republicans in 1920.  1924 saw Tennessee back in the Democratic presidential column;  John W. Davis carried much of the South, if little else.  1928 saw Republicans carry Tennessee in the presidential contest once again, largely due to the fact Democratic presidential nominee, Governor Al Smith of New York, was a wringing “wet” (meaning he favored an end to the prohibition against liquor) and a Catholic.  Protestant Tennessee voted for Quaker Herbert Hoover; as further proof the defeat in Tennessee was little more than religious prejudice one only has to look at the returns from the Democratic bastion of Davidson County (Nashville) and see that Hoover carried it over Smith.  Edward H. Crump had difficulty in keeping Shelby County in the Democratic column.  Still, Democratic gubernatorial nominee Henry Horton easily carried Davidson County, as did Senator McKellar.

The decade of the 1930s in Tennessee belonged to Franklin Delano Roosevelt and on the statewide level, to the political partnership of Senator Kenneth McKellar and E. H. Crump.  Outside of the normally Republican First and Second Congressional districts, the Republicans barely made a showing.  Roosevelt even carried some ordinarily Republican areas and some that already possessed a strong undercurrent of  Democrats like Knoxville and Bristol.

The McKellar – Crump axis remained highly effective until 1948 when the Memphis Boss deserted Senator Tom Stewart and refused to back President Harry Truman.  Republicans and not a few Democrats worried Crump’s defection might lead to a Republican being elected to the United States Senate along with the resulting hard feelings from a brutal brawl in the primary.  Chattanooga congressman Estes Kefauver had edged out Senator Stewart to win the Democratic primary while Crump’s candidate ran an embarrassingly poor third.  Former congressman Carroll Reece, who had been shoved aside by GOP presidential nominee Thomas E. Dewey from the chairmanship of the Republican National Committee, thought he saw an opportunity and ran for the United States Senate.  While E. H. Crump refused to support Harry Truman, Senator McKellar supported the Democratic ticket, which carried the Volunteer State.  Reece won about a third of the vote as the first GOP nominee to seriously contest a Senate race in Tennessee since 1916.

By 1952 the Democrats had been in power for the better part of twenty years.  Democrats had occupied the White House for the entirety of that time and their majority in Congress had only been lost once in 1946.  It was Carroll Reece who had presided over the Republican National Committee when Republicans had won control of both the House of Representatives and the U. S. Senate.  Those majorities were lost in the 1948 election.

Reece had returned to Congress in 1950 by ousting his successor, Congressman Dayton E. Phillips.  So, too, had Congressman John Jennings, Jr. been defeated for Congress that same year by Howard Baker, father of the future U. S. senator.  Guy Lincoln Smith, editor of the Knoxville Journal, which was the voice of Republicanism in East Tennessee, if not the entire Volunteer State, was also the chairman of the Tennessee Republican Party.  Smith urged Reece to run for Congress again and backed Baker against incumbent Congressman John Jennings, Jr.  Reece was a close personal and political friend of Ohio U. S. senator Robert A. Taft who began the 1952 election as the favorite for the Republican nomination.  Reece was a floor leader for Taft at the Republican National Convention and the manager of Taft’s Southern effort.  Taft was upset at the convention by the candidacy of perhaps the most popular Republican to run for president since Teddy Roosevelt: Dwight D. Eisenhower.  Bob Taft, dour and colorless, if a brilliant intellect, could not compete with the war record and celebrity of the man who had successfully freed Europe from the clutches of Adolf Hitler.  Many Republicans like Carroll Reece believed Bob Taft would be the most popular candidate the GOP could nominate to break the solid South, which was a firewall for the national Democratic Party.  The belief was Taft was so conservative it would appeal to the supposedly conservative South.  It is highly questionable that Taft could have cracked the solid South, but Dwight Eisenhower was so personally popular, the general represented a very real threat to the once impregnable Southern firewall.

Tennessee’s Republican Party had largely been dominated by Carroll Reece since the congressman had become National Committeeman and was a national figure inside the party.  Reece worried Eisenhower would attempt to displace him, but a loyal Republican, the congressman moved solidly behind the Eisenhower – Nixon ticket.  Guy Smith became the manager for the Republican ticket in Tennessee.  Obviously in the past, Republican presidential nominees didn’t bother to campaign in Tennessee as the state was not in play; 1952 would change that.  There was genuine enthusiasm and excitement for the Republican nominee and there was an impressive surge in the number of volunteers for Eisenhower.  Congressman Hugh Scott, who had taken the chairmanship of the Republican National Committee from Carroll Reece, evidently recognized Tennessee might well support the general.  The Knoxville Journal reported Congressman Scott was urging Eisenhower to come to Tennessee to campaign.

On October 8, Guy Smith announced Dwight D. Eisenhower would stop at McGhee Tyson Airport briefly for a campaign stop.  The stop would be prior to the general’s visit to Crump’s domain of Memphis where he was scheduled to make a speech to an audience from three states on the topic of agriculture.  Eisenhower would be introduced in Memphis by Edward O’Neal, the longtime president of the American Farm Bureau Federation.  O’Neal had retired but was still highly esteemed by the members of his federation and had always been a Democrat stalwart.  Richard Nixon, the junior senator from California and thirty-nine-year-old GOP vice presidential nominee, had briefly visited Memphis when his plane was being serviced.  Nixon told reporters the Republicans would make an “all-out” effort to build an organization in the South and breach the Democrats’ hold on the region.  “When I talked to General Eisenhower last Sunday he indicated he wanted to make a real effort to build up a strong Republican Party in the South,” Nixon said.  “He will definitely make a speaking tour of this section.  I think there is a very strong possibility that he will come to Tennessee because this is one of those border states in which he have a good chance to win.”  “Yes, I really believe we are going to crack the ‘Solid South’ and that we are going to do it this year,” Nixon told a skeptical reporter.

Prior to having been nominated for the presidency, Congressman Howard Baker had asked the General if he would come to Tennessee and campaign and had been told by Eisenhower he would be delighted to come to the Volunteer State.

Richard Nixon and his wife Pat came to Nashville to campaign on Saturday, September 27, 1952.  Nixon had been under terrific stress immediately prior to his Tennessee visit and had only recently given his famous “Checkers” speech, saying he and his family would keep the little cocker spaniel puppy given to his two daughters.  Nixon had campaigned in Amarillo, Texas before leaving for Tennessee.  One of the first to greet and shake hands with Nixon as he got off his campaign plane was Congressman Carroll Reece.  A motorcade ferried the Nixons to downtown Nashville after 80 young ladies, “Belles for Ike,” had decorated all the automobiles participating in the caravan.

Guy Smith served as the master of ceremonies for the Nashville rally.  Congressmen Reece and Baker were seated on the platform as the speaking began.  Local candidates made brief remarks before the vice presidential candidate came to the rostrum.  The candidate was introduced in Nashville by businessman Lipscomb Davis who praised the nominee for his “courage and determination.”  Nixon did not disappoint his audience, giving his listeners a plate-full of red meat.  Richard Nixon pounded the podium in Nashville and said “dissatisfied Democrats” would put Tennessee in the Eisenhower column in November.  Senator Nixon exulted there would be “a great rebellion” amongst Democrats.  According to the Jackson Sun, Nixon received a “rousing” welcome in Nashville from Tennesseans.  When the senator and his wife landed at the airport, they were greeted by 2,000 people.  When speaking at the War Memorial Plaza, Nixon also pointed to the failed presidential bid of Tennessee’s own Senator Estes Kefauver.  Senator Nixon charged Kefauver had been “tossed aside” by the Democratic Party’s bosses.  “They didn’t dare let him be the Presidential candidate,” Nixon told the audience.  “He knew too much about them.”  That was an allusion to the crime racket hearings Kefauver had conducted, which had exposed some serious graft, especially in Democratic areas like Chicago.  Police estimated the crowd in Nashville to be close to 8,000 people.

From Nashville, the GOP vice presidential candidate came to Knoxville.  Richard Nixon’s speech was recorded and rebroadcast in Blount County over radio station WGAP.  Nixon boldly predicted General Eisenhower would carry Tennessee, Texas and Oklahoma in the general election to 4,000 wildly enthused East Tennesseans as the GOP vice presidential nominee came to Knoxville.  One local reporter asked Nixon about a comment made by Senator John Sparkman of Alabama, the Democratic vice presidential nominee, who said TVA would never have happened under a Republican administration and added “they would get rid of it today if they could.”  “That just isn’t true,” Nixon retorted.  “It’s another big lie of the campaign.”  Republicans, Nixon told the reporter, want “a maximum of local control for TVA while Democrats want control in Washington.”  While speaking in Knoxville, Nixon urged the reelection of Congressman Howard Baker who stood nearby.

The results of the general election shocked Tennessee Democrats.  Eisenhower carried Bristol and returned ordinarily Democratic Sullivan County to the GOP column, which had not happened since Hoover’s victory in 1928.  Eisenhower won more than 56% of the vote in Sullivan County.  The Eisenhower – Nixon ticket won East Tennessee heavily while Democrats carried the seven congressional districts west of Knoxville.  Crump’s Memphis and Shelby County gave Adlai Stevenson just over 58% of the vote while Davidson County posted only slightly more than 52%, a figure that left Volunteer State Democrats gaping in wonderment.  The increase in numbers for Republicans in both areas was dramatic; more than 25% in Memphis and quite nearly 20% in Nashville.  Also startling to Tennessee Democrats was the defection of Chattanooga, which had voted better than 56% for Harry Truman in 1948, yet went for Dwight Eisenhower with 55% in 1952.

Democrats would make a strenuous effort to reclaim Tennessee during the presidential election of 1956.  They would have the extra added advantage of having Estes Kefauver as the vice presidential nominee, but change was coming.