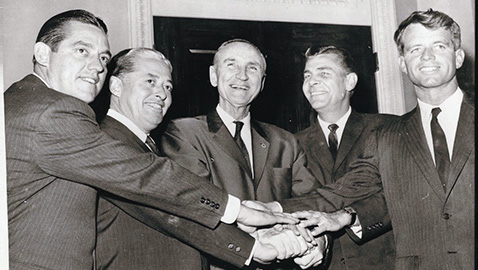 By Ray Hill
Pulaski Congressman Ross Bass had defeated Governor Frank Clement for the Democratic nomination to succeed the late Senator Estes Kefauver.  Bass faced Republican Howard Baker in the general election.  It was the first time Frank Clement had lost an election and his defeat had been sweeping.

Congressman Bass confidently approached the general election, running on the same ticket as Senator Albert Gore and President Lyndon Johnson.  There had been signs Tennessee was no longer the Democratic bastion it had once been.  The Volunteer State had gone Republican in the last three presidential elections; in 1952 and 1956 it had voted for GOP Dwight Eisenhower.  In 1960 Tennesseans preferred Richard Nixon to John F. Kennedy.

Both of Tennessee’s seats in the U. S. Senate had not been up for election together at the same time since 1934.  Gore was running for a regular six-year term while Ross Bass was the nominee to finish the last two years of the late Estes Kefauver’s term of office.

The final tally was Ross Bass winning with 568,905 votes to 517,330 for Howard Baker.  Dan Kuykendall, the GOP nominee against Albert Gore, won 46% of the vote in the general election.  Lyndon Johnson beat Barry Goldwater with 634,947 votes to 508,965 for the Arizona senator.  Howard Baker had actually run ahead of Barry Goldwater in Tennessee.  Ross Bass had run less than 2,000 votes behind Albert Gore.

No one watched events more closely than Governor Frank Clement.  The governor had once been confined to private life once before, a dismal four-year period of forced exile from the governor’s mansion.  Even though he had lost the primary election for the U. S. Senate to Ross Bass in 1964, he had another opportunity to run in 1966.  He could not seek reelection as governor that year, but could either run for the Senate or retire from politics, at least for a period of time.

Clement, watched as always with profound suspicion by the Nashville Tennessean, seemed to be acting like “a full-blown candidate” in the newspaper’s opinion.  Columnist Bill Kovach citing the governor’s recent “spurt” of activity, thought Frank Clement would run for senator again in 1966.  Perhaps the bitterest critic of the governor in Tennessee, even the Tennessean conceded Clement had attempted to learn from his 1964 defeat.  The Tennessean observed following his loss in the 1964 Democratic senatorial primary, Governor Clement had since worked hard “to cement his relationship with the Negro voters of the state.”

Bill Kovach, who wrote “Capitol Spotlight” for the Tennessean, thought Clement’s “strongly conservative campaign” had been “one of the major miscalculations of the year” and the governor had learned a lesson from that experience.  Kovach thought the governor’s Christmas message, which had flashed across TV screens in Tennessee, had made Clement seem more human and less like “some aloof politician.”  While long noted for his oratory on the stump, Frank Clement had not fared nearly so well on television.  The governor had participated in a television series highlighting visits with Tennessee’s chief executive, including a two-part tour of the governor’s mansion.

Kovach conceded all of Clement’s actions fit perfectly well within the expected role of a governor, but insisted they also helped to refurbish the governor’s tarnished image.

Most considered it a certainty that Clement wanted to vindicate himself by defeating Senator Ross Bass in the Democratic primary and go to Washington, D.C. and take his seat as a member of the United States Senate.

The governor got quite a lot of publicity when he called the Tennessee General Assembly into special session on March 14 to consider property tax assessments and a $25 million surplus.  Clement wanted the legislature to propose an amendment to Tennessee’s Constitution “to classify property – – – which will allow it to be taxed at different rates.”  Clement was also one of forty governors who received a classified briefing from Secretary of State Dean Rusk about the war in Vietnam.

Governor Clement’s speech before the legislature was broadcast on television and he forcefully met his critics who contended he had only called the General Assembly into special session for political purposes.  “Let the political winds blow,” the governor roared.  “Let the political partisans howl.  Let the election year storm rage.  Let us…calmly stand our ground and do those things which should be done for the benefit of all Tennesseans and do it now!”

As might be expected, the Tennessean was critical of Clement’s proposal.  The Tennessean did admit Clement had been forced to be creative when he came back into office in 1963, finding “that his predecessor, Mr. Buford Ellington, had left the revenue cupboard bare.”  Not only that, but Ellington, according to the Tennessean, “also left a tremendous backlog of untended needs in education, mental health and other areas of service.”  The Tennessean gave Clement no credit for tending to those needs; rather, the Nashville newspaper snapped Clement had gone “overboard” in proposing new taxes to address those needs it cited.  The Tennessean complained “the amazing thing about the Clement-Ellington years is that the on-again, off-again tax programs have kept the state lagging in mental health and education.”

The Tennessean was solidly in Senator Ross Bass’s corner and would strongly back the gubernatorial campaign of first-time candidate John Jay Hooker against Buford Ellington’s comeback in 1966.  Plans for Frank Clement’s comeback were also underway as the Jackson Sun reported petitions were being circulated to qualify the governor to seek the Democratic nomination for the United States Senate in Madison County on May 13, 1966.  The Sun also noted prospective GOP candidate Howard Baker was likely to face a primary challenge of his own, which might complicate the Democratic primary as Republican “voters may not care for Gov. Clement, but they like Sen. Ross Bass even less.”

The Sun also noted Bass might well not enjoy the almost solid support he had received from the black community in 1964; the Sun thought Clement “has paid particular attention to this segment of Tennessee voters and may have made some inroads in this area.”

Clement inched ever closer to an official announcement of his candidacy.  Speaking in Knoxville to about 400 members of the Jaycees, Clement said, “This is my farewell to you – – – as governor.  I want to emphasize the ‘as governor’ part of it.”  The governor had a habit of referring to himself in the third person and told the Jaycees, “Frank Clement hopes to be back again, again, and again.”

Governor Clement made his announcement official on May 31, 1966.  He would challenge Ross Bass inside the Democratic primary for the senatorial nomination.  Clement promised he would treat the office with “the dignity and respect it deserves”, while assuring Tennesseans he would not neglect his duties as governor during the campaign.

Referring to the constant speculation about his future political plans, Clement said, “I am today ending that speculation and uncertainty by announcing to all the people of Tennessee that I will be a candidate for the United States Senate seat…”

When asked why he expected to be successful in 1966 for the same office he had sought in 1964 unsuccessfully, the governor had a somewhat flimsy response.  “I had not yet reached the midpoint of a four-year term as governor then,” Clement said.  “I feel that in the last campaign I was in a poor position to have the record properly evaluated.”  When asked if he would take part in the coming primary fight between Buford Ellington and John Jay Hooker for the gubernatorial nomination, Clement responded, “I want all the votes I can get.  I’d like to get the Ellington votes; the Hooker votes, and I’d like to get all of the Bass votes.”

Senator Ross Bass had made his own announcement that he planned to seek reelection the Saturday prior to Frank Clement’s declaration he, too, would be a candidate.  Bass said he had kept his promises to the people from his campaign two years prior and asked for a full six-year term in the Senate.  Senator Bass dismissed Governor Frank Clement as “someone out of a job and looking for my job.”

When asked if he expected a difficult campaign, Bass retorted, “Every fight is rough.”  Senator Bass appreciated the irony of facing Clement once again in the Democratic primary and quipped it might well be akin to “what we call the Late Show – – – same characters, same plot, same winner.”

Senator Ross Bass made a political mistake while attending a Democratic fundraising dinner in Washington, D. C.  The mistress of ceremonies, attempting to make a word play on Bass’s name, referred to him as “big mouth Bass,” a characterization the senator did not appreciate at all.  Growling he had not wanted to attend the dinner in the first place, Bass muttered he thought he would leave, then jumped up from his table and stalked out, leaving his beautiful, albeit embarrassed wife Avanell by herself.

The second time Senator Ross Bass and Governor Frank Clement faced one another in a primary election, they laid aside their differences to join the gubernatorial candidates, Buford Ellington and John Jay Hooker, for a banquet with Davidson County’s Democratic Women.  Bass made light of the much-publicized incident where he had walked off the dais of the earlier dinner in Washington, Senator Bass quipped, “I wanted to come.  I’m glad I came.  I’m going to stay.”  Bass managed to exchange pleasantries with his opponent, gesturing to their wives, Avanell and Lucile, and said, “Governor, I think there’s at least one way in which we’re alike – – – we both outmarried ourselves.”

All the candidates tried to keep the tone light and “nonpolitical.”  Clement spoke about supporting the troops in Vietnam, returning to his old-time oratory, which had been missing through much of the campaign.  It was likely John Jay Hooker who got off the best quip of the evening, when he looked at Governor Clement and former governor Ellington and wryly said, “It is true I have no experience at being governor of Tennessee, but you know they haven’t exactly passed the job around the last few years.”

Clement used Bass’s stomping out of the fundraiser in his own speeches.

While speaking to a crowd of 400 people at Trenton in front of the Gibson County Courthouse, Clement said, “I was invited here…I wanted to come…I am going to stay until I have shaken every hand on this Courthouse lawn.”  That is precisely what the governor did after the conclusion of his thirty-minute speech.

Whether Frank Clement was able to reinvent himself for the 1966 senatorial campaign remained to be seen.  Both the governor and Senator Ross Bass campaigned at a furious pace in the humid heat of July.

The outcome of the election would determine not only their own respective political fates, but that of Tennessee’s politics for decades to come.