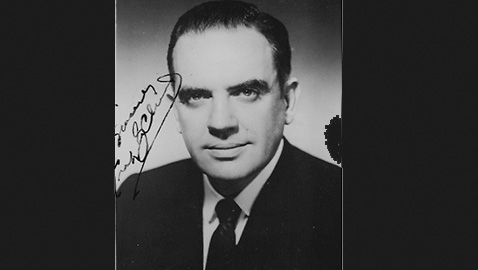 By Ray Hill
When Senator Estes Kefauver’s aorta ruptured on the evening of August 13, 1963, it set off a scramble to succeed him.  Governor Frank Clement appointed millionaire businessman Herbert “Hub” Walters of Morristown to fill the remainder of Kefauver’s term until a special 1964 election could be held.  Although conservative by the standard of many Tennessee Democrats, few could argue that the appointment of Walters was not a fitting tribute for one who had faithfully served the party for so long.  In Tennessee, “Mr. Hub” was “Mr. Democrat” to tens of thousands of his fellow Democrats.

Still, Walters had been operated on for throat cancer and was seventy-one years old.  Few believed Walters would be a candidate to succeed himself in the 1964 special election; most political observers believed the governor had appointed Walters not only to honor him, but so that Clement could run himself in 1964.  There were other prominent Democrats in Tennessee who gave running for the United States Senate more than a passing thought.  Former governor Buford Ellington, once Clement’s Commissioner of Agriculture during the better part of Clement’s original six years as governor of Tennessee, was thought to be mulling the possibility of a Senate race.  Ellington had defeated a host of challengers to narrowly win the Democratic nomination for governor in 1958 and without the support of the Clement organization it is highly doubtful he would have been successful.  Ellington and Clement had once been close and many Tennesseans still perceived the two were warm personal friends and political allies, but the truth was somewhat different.  Whatever close relationship had once existed between Frank Clement and Buford Ellington, it had cooled to a glacial temperature.

The name of Estes Kefauver’s widow, Nancy, a vivacious redhead from Scotland, was briefly floated as a candidate to succeed her late husband.  Mrs. Kefauver hardly waited a moment to make a definitive statement she was not interested in being a candidate.  A more certain prospect was Ross Bass, congressman from Tennessee’s Sixth Congressional District for the last ten years.  Bass had been a bombardier during World War II, an experience he never really got out of his mind.  After the war, Bass returned to his home in Pulaski, Tennessee where he became a small businessman, opening up a flower shop.  In 1946, Bass was named by Congressman Wirt Courtney as Postmaster of Pulaski, a position he continued to hold until he resigned to run for Congress in 1954.  Apparently Bass was popular enough to keep Courtney’s successor, Pat Sutton, from attempting to displace him.  Sutton, who had made a failed race against Senator Estes Kefauver in the 1954 Democratic primary, had no such compunction against challenging the freshman congressman when Bass sought reelection in 1956.  Congressman Bass beat Sutton badly, winning almost 70% of the vote.  Yet there was evidently some rancor between the two men.  When Ross Bass made his last campaign, bidding to return to Congress in 1976, Pat Sutton ran in the Democratic primary against him.

Congressman Ross Bass was well positioned to run for the United States Senate in 1964; his Sixth Congressional District covered a huge swath of Middle Tennessee, running from the Kentucky border to the Alabama state line.  Nor could it be disputed Bass had entrenched himself inside his congressional district and was popular with the people he represented.  Bass had been reelected in 1962 with more than 80% of the vote.  Bass had faced a primary challenger in the 1960 election and won with almost 90% of the vote.  Still, Frank Clement had obvious advantages that would have given any prospective challenger pause.  Clement had been elected statewide three times, had won three Democratic primaries against serious opponents and commanded the allegiance of an army of appointees and patronage employees.

Tennessee was still, at least in theory, a Democratic state and Ross Bass was shrewd enough a politician to realize Frank Clement was not invulnerable.  As governor, Clement had raised taxes, never a popular thing to do with Tennesseans.  Jim Nance McCord had found that out in 1948 when he had initiated the sales tax to support education, only to lose to Gordon Browning, who had left office in 1938 as the worst defeated incumbent in the state’s modern history.  Clement was implacably opposed by the Nashville Tennessean, which waged a daily war against the governor’s administration.  Bass was popular with several important Democratic constituencies, including blacks and labor.  Congressman Bass was also well liked by many of the late Senator Kefauver’s supporters, which constituted a wide network of voters throughout the state.  Bass was perceived to be more liberal than Governor Clement and he was the only Democrat in Congress from the rural South to vote for the Civil Rights Act of 1964.  Bass received a “zero” rating from the conservative Americans for Constitutional Action, along with Tennessee congressmen Richard Fulton of Nashville and Joe L. Evins, who represented the rural Fourth Congressional District.  By contrast, Congressmen James H. Quillen and Bill Brock received “perfect” scores from the ACA, while Howard Baker, Sr. got a 73% score.

When president John F. Kennedy was murdered in Dallas in November of 1963, both Governor Frank Clement and Congressman Ross Bass, like most public officials, gave out official statements.  Congressman Bass said, “An assassin’s bullet has taken the life of the greatest man I have had the privilege to know.  I am amazed that the hate-mongers of this nation were able to warp a mind to this extreme.  I have never known a man with a higher intellectual level, a man with a stronger sense of dedication or man with greater leadership qualities than Jack Kennedy.  He will be remembered along with Lincoln, and his influence will be felt for generations.”  Governor Clement said, “I am overcome by the shocking, tragic and terrible news that he has died at the hands of an assassin, and that Governor Connally has been wounded.  I had met the President on several occasions, and only last spring he was our guest in Tennessee.”  Bass’s statement was highly emotional, while Clement’s was more aghast, but both were far from former governor Buford Ellington’s terse comment, “A tragedy.”

After the unseemly haste with which potential candidates began to consider running for the U. S. Senate following the unexpected death of Estes Kefauver, things had calmed down considerably during the fall of 1963.  After a flurry of activity, Ross Bass had slowed down to the point where some believed he had decided to forego the Senate race to remain in Congress.  Frank Clement was somewhat constrained by the reluctance of Senator Herbert Walters to state his own political intentions.  Senator Walters stubbornly insisted he would not reveal his own plans until after the New Year.

The Clarksville Leaf-Chronicle amused itself by asking readers if they would vote for Ross Bass for senator should he run in 1964.  Clarksville was inside Bass’s Sixth Congressional District and one would have expected he would get strong support from those he had represented in the House of Representatives for a decade.  Farmer Calvin Bowers did not disappoint, saying, “I can only speak for myself, but I certainly would.  I believe he has the working man’s cause at heart.”  Salesman James Conway also said he would vote for Ross Bass, adding, ”I certainly would not vote for Frank Clement for senator.  I would hate to think we had to be represented by Clement in Washington.  I believe, by his past record, Bass would make a good senator.”  Tommy Hayes, a student, echoed the support for Bass in Clarksville.  Hayes thought local folks would vote for Bass.  “He has a fine record in Congress as representative and I feel he would be a real good senator.”

Following a report by the Knoxville News-Sentinel that Bass had told several friends he would run for the Senate in 1964, the congressman insisted he had yet to make up his mind.  Ross Bass told the Tennessean, “I have and continue to be interested in becoming a United States senator.  However, I have reached no definite decision and do not expect to until some time in early February.”  Bass conceded he was still talking about running with friends and supporters “throughout Tennessee” and while he continued to receive encouragement, the congressman thought even if he had reached a decision to run, it would not be appropriate to make his plans pubic “because of the period of mourning for President Kennedy.”

The race for the Senate drew a blast from Edward W. “Ned” Carmack of Murfreesboro, who bellowed he was going to run for the U. S. Senate in 1964 “unless somebody supports Medicare and one or two other measures I believe in.”  Carmack, son of the legendary U. S. senator and editor who had been gunned down in the streets of Nashville, had at one time or another, run for or threatened to run for just about every office within the gift of the people of Tennessee.  Carmack had come within a whisker of beating Senator Tom Stewart inside the 1942 Democratic primary and had challenged venerable Senator K. D. McKellar in 1946.  McKellar was seeking his sixth term in the United States Senate and Carmack had the all-out support of the Nashville Tennessean in his bid to unseat Tennessee’s longest serving senator.  McKellar had soundly beaten Carmack, ending whatever political career he had.  There was good reason to believe Ned Carmack was mentally unstable and his interview with the Tennessean did little to dispel that notion.  While Carmack claimed both Congressman Bass and M. M. Bullard were his personal friends, he said he would run against either or both if necessary.  “Somebody is going to have to support Medicare,” Carmack complained.  “I believe in it.”  Carmack refused to elaborate on the other two issues of importance to him.  “If neither of them support Medicare,” Carmack blustered, “they are going to get trouble from me if I am able to give it.”  The sixty-three year-old Carmack said, “I personally do not want the job.  I would rather see a younger, more vigorous man have it.  I will not complicate the race at all if these three things are supported.”  Bullard, reached for comment by the Tennessean, made statements designed to placate Carmack, while Congressman Bass could not be reached by the reporter for any kind of statement.  When asked about Governor Clement, Carmack boasted, “I can handle Mr. Clement and I think he knows I can.”

“I want these things firmly supported” Ned Carmack barked.  “I don’t want any ducking about it.  Somebody should stand clearly and plainly what they are for.”  Carmack added, “I never expected to get into this thing, but I just may.”  The former candidate, who had never been elected to anything, went on to relive the past through his 1942 race against Tom Stewart.  “I carried that campaign right into the jowls of Shelby County,” Carmack bragged.  The Tennessean went on to relate Carmack had supported Estes Kefauver’s 1948 campaign when the Chattanooga congressman had defeated Senator Stewart.  There was no mention made of Carmack’s race against McKellar when he had been beaten badly by the senator.  The Tennessean concluded Carmack’s puffery by saying once Kefauver had been elected to the Senate, Carmack had been one of Kefauver’s “trusted advisors”, which was sheer delusion.  After making his demands, Ned Carmack descended back into well-deserved obscurity.

On January 7, 1964, the Clarksville Leaf-Chronicle published a report that Congressman Ross Bass was all but certain to run for the United States Senate.  Bass was certainly acting very much like a candidate, visiting Knoxville to make two speeches to different organizations.

By early 1964, Ross Bass believed he had the support of most of the late Estes Kefauver’s organization.  Governor Frank Clement and Senator Herbert Walters had yet to reveal their own political plans.