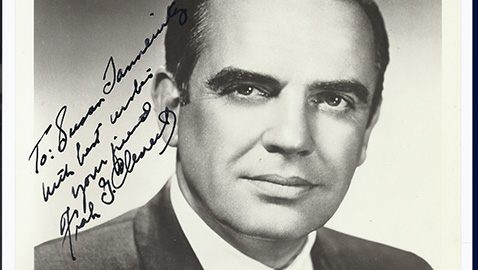 July of 1966 was hot and humid in Tennessee that year. Two veteran campaigners, Governor Frank Clement and Senator Ross Bass, were stumping the state for the Democratic nomination for the United States Senate. Both campaigned at a furious pace. The Nashville Tennessean reported one painter busy at work was so startled he quite nearly fell off his ladder when a hand shot out of a window and a voice boomed, “Hello. I’m Ross Bass. Help me get re-elected to the Senate.” The senator moved at a frenetic pace, so much so while traveling with his boyhood friend Ed Eslick, the two, followed by campaign aides and at least one newsman, were deep in conversation when Bass looked up and said, “Why, Ed, I believe we’re in Kentucky!”

The senator had voted for the 1964 Civil Rights Bill and recalled how he could not find a single person to introduce him around Brownsville. In 1966, things had changed and Bass had a “small but enthusiastic group” working on behalf of his reelection campaign. “Race is no longer an issue,” Bass explained. It was left unsaid Clement had campaigned in 1964 against the law, which both of Tennessee’s U. S. senators had voted against, but now accepted it as the law.

Governor Clement changed his mode of campaigning in 1966. While he relied upon his famed oratorical gifts during the 1964 race, Clement was speaking once nightly, while relying more on personal contact with voters, shaking more hands and talking less. The governor moved rapidly, traveling by automobile during the day and campaigning in two or three counties and then flying to his last stop of the evening where he would make a speech. Clement refreshed himself with catnaps between stops while in the car. Forty-six years old in 1966, Clement enjoyed telling audiences, “You know, when I was the age of my boys, I thought a man 46 years old was indeed an elderly man, in the twilight of life and not long for this world.

‘But now that I am 46, I have changed my mind. I think that at the age of 46 I am in the prime of life and just the right age to be United States Senator.”

When Clement opened I-40 from Nashville to Memphis, Senator Bass cried foul. “He couldn’t wait to finish it to dedicate it – – – that would have been after the election,” Bass fumed. Bass pointed out he had voted for the interstate highway bill as a member of Congress in 1957 and, “Now, nine years later, we have one highway in Tennessee that people can travel on.” Bass had driven over the eastern portion of the new interstate and found it replete with “chugholes”, high shoulders as well as being “improperly marked.” Bass considered it dangerous. “Sen. Albert Gore wrote the interstate bill, I voted for it, and the federal government paid for 90 per cent of the cost. But who dedicates it?” Bass thundered to a crowd of supporters. “Old Frank,” some in the crowd called back. “That’s right – – – the governor,” Bass snapped.

Bass also whipsawed Clement on the governor’s record on education. Bass complained Clement had allowed Tennessee to fall “dead last” in per capita spending on education in the Volunteer State, yet the senator had also been critical of the taxes raised to support education in Tennessee by the Clement administration. “I do not believe any man who has ignored his responsibilities in the field of education should ask to go to Washington as your senator,” Bass cried.

Speaking in Columbia, Tennessee, Bass used a Biblical phrase frequently employed by the governor. “My opponent has been going across the state and saying, ‘Take my hand and lead me on’, but he has taken the hands of school children of Tennessee and held them back,” Bass charged. “You have paid the taxes but the money has just been used to pile up in some banks so the governor could use it to help buy his way into the U. S. Senate.”

Bass reminded his audiences the governor had called medical care for seniors “pie in the sky” during the 1964 campaign. “This senator believes the elderly citizens of this nation are important,” Bass thundered. “They can benefit this nation. I promise that I will work for further benefits under the Social Security system.”

Finally, Ross Bass came down to the nub of it, saying the governor was “asking you to sacrifice seniority and 12 years’ experience so that he can have a political job.”

As Ross Bass escalated his attacks on Frank Clement, the governor was touring new shopping centers, shaking hands and swearing he would never contract “Potomac fever.” Clement told his own audiences he would “vote the convictions of Tennesseans the best I understand them.” “You will be my bosses,” Clement said. “I intend to vote the way you the people want me to vote.”

Bass bitterly refuted Clement’s accusations he had been a “rubber-stamp” senator for the Johnson administration. “I haven’t rubber-stamped anything,” Bass snarled, “but I’m glad he has rubber-stamped my platform. He has practically adopted my record as his platform.”

The governor called for a complete “overhaul” of the foreign aid programs administered by the State Department. Clement was emphatically against what he termed “foreign giveaways,” while saying, “I’m not against foreign aid.” Clement complained of waste in the foreign aid program, a sentiment likely shared by tens of thousands of Tennesseans.  “Some of these countries – – – when we are handing them a check with one hand, we’re having to pull a knife out of our back with the other.”

A typical day of campaigning for Frank Clement was hectic. The governor visited a black community in Nashville, including the headquarters for the Davidson County Independent Political league, which had endorsed Ross Bass. Clement moved on to a friendlier headquarters, that of a joint Clement – Ellington organization where he visited with state senator Frank Gorrell. The governor began the day with a stop at the Farmer’s Market, hurried on to the stockyards, Tennessee A & I State University, the Davidson County Courthouse square, the fire and police departments, the Green Hills Shopping Center, and went from person to person at the Southern Bell Telephone Building. Governor Clement managed to squeeze in a stop to appear on WSM’s noontime television show hosted by Jud Collins.

Governor Clement, who had promised not to “sling mud” during the campaign largely kept his promise; the governor campaigned on issues, oftentimes injecting a touch of personal feeling into his speechmaking. Referring to his political defeat in 1964, Clement told one crowd, “Instead of complaining, alibiing or making excuses” about certain “questionable things that went on in the latter part of that campaign, I promised you I would be the best governor in the history of the state of Tennessee.” Clement believed he had kept his promise. Governor Clement spoke of his love of Tennessee and love for the people of Tennessee, but chose not to “dwell on the past.”

Clement did poke fun at Senator Bass. “My opponent has become upset and cried, and moaned and groaned from Bristol to Memphis that, ‘Frank Clement is trying to take my job away.’

“My, my what two short years can do to a man who has caught Potomac fever,” the governor clucked. “He has forgotten that seat doesn’t belong to him or to Frank Clement, but it belongs to you.” Much to the horror of many of the late Senator Estes Kefauver’s friends and supporters, Clement attempted to compare himself to Kefauver, whom he described as a “Democrat’s Democrat.” The governor thought Kefauver was “a fighting senator”, not ‘a rubber stamp for the White House”, ignoring the fact much of Kefauver’s tenure as a senator was under a Republican president.

The governor used his office shrewdly during the primary campaign, drawing howls from Ross Bass that Clement was a “dedicator instead of an educator.” The governor, while dedicating a new district highway patrol center named for former U. S. senator Herbert S. Walters, who sat beside the governor on the platform, acknowledged Bass’ discomfort. “I think everything should be opened as soon as possible”, Governor Clement said. “If a man is not smart enough to dedicate these projects before the election, I don’t feel he is smart enough to be U. S. senator.”

As the senatorial campaign for the Democratic nomination came down to the wire, it reflected the heated gubernatorial campaign between Buford Ellington and John Jay Hooker. Hooker, an attractive candidate, generated real excitement and enthusiasm among many Democrats, especially young Democrats. Congressmen Richard Fulton and William R. Anderson backed Hooker over former governor Ellington. Many of those supporting Ellington for governor supported Frank Clement for the United States Senate. Clement and Ellington clearly represented the old order, while Bass and Hooker especially represented a new day in Tennessee politics.

Where before Clement had campaigned liberally sprinkling his speeches with tributes to “Cille and my fine three boys”, the governor rarely lapsed into his old-time oratory, although there were moments when he simply could not help himself, crying, “I’m the same Frank Clement I’ve always been.”

After giving the last official speech of the primary campaign in his home of Pulaski, Bass traveled to Knoxville to meet with his state campaign manager. Senator Bass did not neglect the voters, making several stops throughout Knoxville. Introducing himself to one Knoxville woman, she blurted out, “Oh, yes, Big Mouth Bass!” The woman realized her mistake at once and quietly apologized, telling the senator she did not mean to be rude. Senator Bass sat down at the table with the woman and her friends and proceeded to make fun of his nickname as well, putting her at ease. Bass flew back the same evening to Jackson for a dinner with supporters.

Bass felt good about his campaign as Election Day approached. Pointing out he had voted “yea or nay 227 times” during the most recent session of Congress, Bass said Governor Clement had not been critical of any of the votes he had cast. “His silence almost constitutes an endorsement of my record,” Senator Bass thought.

The day before the election Ross Bass gleefully predicted a senatorial primary between Howard Baker and Ken Roberts would keep GOP voters busy so they could not render any help to Frank Clement. “The Republican primary is going to deprive the governor of the votes he might have received from grateful Republican leaders as a result of his selling out the Democratic party,” Bass said. “As a result, the governor will have to face Democrats at the polls, many of whom remember the trade he made with the opposition party vividly.”

Nobody was more stunned than Ross Bass when the election returns began pouring in; Frank Clement squeaked by Bass in the Democratic primary, winning by little more than 18,000 votes. Frank Clement won 384,322 votes to 366,079 for Ross Bass. To his dying day, Ross Bass would insist his loss was the result of Republicans crossing over to vote for Clement because they believed he would be easier for Howard Baker to beat in a general election.

The 1966 senatorial campaign effectively ended the political careers of both Frank Clement and Ross Bass. Howard Baker defeated Frank Clement in the general election and while Bass made two attempts at a political comeback, both were unsuccessful. Frank Clement’s path to the United States Senate as a sitting governor was filled with obstacles he could not overcome.