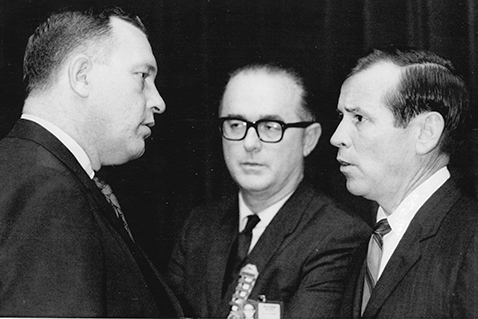 Since Tennessee began popularly electing United States senators in 1916, only two efforts by Republicans in the Volunteer state could be legitimately described as serious bids to win.  One such effort occurred in 1916 when former Governor Ben W. Hooper contested with then-Congressman Kenneth D. McKellar of Memphis.  McKellar won the general election with 55% of the vote.  The second such effort came in 1948 when former Congressman Carroll Reece observed a deeply fractured Democratic Party and what appeared to be a strong Republican year.  Reece was the GOP nominee for the U. S. Senate while country music legend Roy Acuff carried the Republican banner for governor in 1948.  Both candidates received only about a third of the ballots cast.

1964 saw both of Tennessee’s seats in the United States Senate up for election due to the death of Estes Kefauver.  Senator Kefauver had died suddenly on August 10, 1963 when his aorta burst while he was awaiting surgery.  Governor Frank Clement, long rumored to have ambitions to sit in the Senate, appointed a caretaker to serve until the next regular election.  Herbert S. “Hub” Walters was known as “Mr. Democrat” in Tennessee.  A millionaire businessman from Morristown, Walters did not seek to win the remaining two years of Estes Kefauver’s term.  Instead, Governor Clement and Congressman Ross Bass of Pulaski fought a bitter battle for the Democratic nomination.  Bass surprised quite nearly everyone by easily beating Clement in the primary.  It was the first loss of Frank Clement’s political career.  Like the good Democrat he was, Governor Clement offered his support to Bass in the general election.

Tennessee Republicans had nominated candidates for both Senate seats who were far more than merely respectable; they were credible candidates in a state whose voting patterns were changing.  Dwight D. Eisenhower had carried Tennessee in the 1952 and 1956 elections.  Even the addition of Senator Estes Kefauver to the 1956 Democratic ticket as the vice presidential candidate had not saved the Volunteer State from the GOP.  Richard Nixon won Tennessee by an even bigger margin over John F. Kennedy in 1960.  Former Democrats were finding it easier to support down-ballot Republican candidates after having voted for GOP presidential nominees for the past twelve years.  Bob James, GOP nominee for Congress, had nearly toppled veteran incumbent Congressman Clifford Davis in Shelby County in the 1962 election.  James lost by 1,213 votes in what had once been the solidly Democratic domain of E. H. Crump.  Republicans did wrest one seat in the House of Representatives from the Democrats in 1962 when Bill Brock beat Wilkes Thrasher Jr.  Brock became the first Republican to win Tennessee’s Third Congressional District since 1920 when the Volunteer State had seen an unprecedented sweep by the GOP.

The two Republicans nominated to run for the United States Senate in 1964 were Howard Baker Jr. and Dan Kuykendall.  Baker was the son of the late Howard Baker, who had been the congressman from Tennessee’s heavily Republican Second Congressional District from 1951 until his death in 1963.  Howard Baker Jr. very likely could have had the Republican nomination to succeed his father in the 1963 special election, but he had his sights set on a bigger prize: a seat in the U.S. Senate.  Instead, in an effort to keep peace inside the GOP, Baker urged his stepmother, Irene, to run.  Irene Baker ran and won the special election to finish out her late husband’s term.  Mayor John J. Duncan of Knoxville and Judge Frank Qualls of Roane County fought a nip and tuck race for the Republican nomination for Congress from the Second District in 1964.

Dan Kuykendall’s family had lived in Tipton County in West Tennessee before following Sam Houston (a governor of the Volunteer State and a political protégé of General Andrew Jackson) to Texas.  Kuykendall had served in the Second World War before returning to Tennessee and making his home in Memphis.

Dan Kuykendall had enthusiastically supported a variety of GOP candidates including Dwight Eisenhower and Richard Nixon.  Kuykendall had managed Bob James’ nearly successful congressional campaign in 1962 and had been chairman of the Republican Party in Shelby County in 1963.  Kuykendall had been methodically moving around the state building up support to challenge Tennessee’s “Old Gray Fox,” Senator Albert Gore Sr.

Gore was a formidable candidate in his own right and had repeatedly demonstrated his vote-getting ability.  A youthful Gore had been the campaign manager for Gordon Browning’s successful gubernatorial bid in 1936.  A grateful Browning had appointed Gore to serve as his Commissioner of Labor.  When Fourth District Congressman J. Ridley Mitchell ran in a 1938 special election for the U. S. Senate, Albert Gore ran in a crowded Democratic primary and won.  The Fourth Congressional District was solidly Democratic (its congressman had for years been Cordell Hull) and Gore was reelected six times.  Gore challenged the first man to be popularly elected to the United States Senate from Tennessee, Kenneth D. McKellar.  McKellar was (and still is) Tennessee’s longest-serving United States senator, holding office for thirty-six years after six in the House of Representatives.  Senator McKellar was deeply entrenched in Tennessee, but he was also eighty-three years old in 1952 and ailing.  Albert Gore ran a clever campaign stressing his own relative youth (he was forty-four) for a six-year term.  Gore, realizing many Tennesseans revered the old senator, campaigned without attacking his opponent and showed the incumbent considerable respect.  Congressman Gore retired the venerable McKellar.

It was no fluke, but rather a demonstration of Gore’s ability as a politician.  Gore had played his fiddle in his first congressional campaign and, although some thought him rather aloof, the congressman was an able orator and effective on the stump at a time when television was in its infancy.  Gore faced a determined challenge from the personally wealthy former governor Prentice Cooper in the 1958 Democratic primary.  Some Tennesseans were unhappy with Albert Gore because, like his colleague Estes Kefauver, the senator had not signed the “Southern Manifesto.”  Cooper campaigned on a platform of protecting “the Southern way of life.”  Prentice Cooper was the only man in 100 years to have been elected to three consecutive two-year terms as governor.  Still, Albert Gore once again demonstrated his ability and popularity in a bitter campaign.  Albert Gore beat Cooper easily.

In 1964, Senator Albert Gore and Congressman Ross Bass tied their own campaigns to that of President Lyndon Johnson as it was becoming increasingly apparent LBJ would win the Volunteer State.  Senator Gore in particular ignored Kuykendall and focused his verbal fire upon Barry Goldwater.  So, too, did Ross Bass largely ignore Howard Baker.  Instead, Bass toured Tennessee and enjoyed reminding voters of “this unprecedented prosperity.”  “In these dangerous times, what we need is a safe President,” Albert Gore told Tennesseans.

Dan Kuykendall was perceived to be more stridently conservative than Howard Baker and while that notion may well have been a small matter of degree, the Memphian had been a backer of Barry Goldwater for the GOP presidential nomination.  Kuykendall had said Goldwater’s candidacy was “the icing on the cake” of his own campaign for the Senate.  Dan Kuykendall’s strategy was to stay on the offensive throughout the campaign, in particular against President Johnson and Senator Gore.  Howard Baker told Tennesseans he believed the paramount issue of the campaign was what he described as “Federal encroachment” in every respect of the lives of Americans.  Baker said Congressman Ross Bass was indeed a man “committed to the principal of big Government.”  Baker predicted “the running tide of conservatism will carry Goldwater into the White House, and two Senators with him.”  When reminded the Tennessee Valley Authority was an example of big government, Howard Baker disagreed.  “TVA is not an example of Federalism,” Baker replied.  “Governments are obligated to do for the people those things which they cannot do themselves, within the limits of financial and moral responsibility.”

For his part, Kuykendall huffed the Democrats had used the issue of the Tennessee Valley Authority throughout the general election campaign as “a blackmail issue.”  Kuykendall thought the Democrats were “blackmailing the people of Tennessee with their light bills.”  “I am for TVA and the Republican record on TVA in Tennessee is spotless,” Kuykendall insisted.

Both Bass and Gore remained firmly hitched to Lyndon Johnson’s wagon, although Ross Bass had voted for the Civil Rights Act.  “I feel that my own election to the U. S. Senate is important,” Bass said.  “But more important is the reelection of Sen. Albert Gore, and more important than that is the need to elect President Johnson for a full term.”  Congressman Bass said he believed LBJ “stood 20 feet tall” when he said in Nashville he would never sell TVA.

Albert Gore put it more simply and in terms Tennesseans could appreciate.  “I’m not just interested in winning myself . . . I want to beat the tar out of Goldwater.”

Election Day brought the expected.  Lyndon Johnson won 55% of the ballots cast in the Volunteer State.  Both Senator Albert Gore and Congressman Ross Bass won the election to the United States Senate.  Still, Republicans had much to celebrate.  Bill Brock demonstrated his election was not the fluke Democrats had believed it was when he won reelection to Congress.  Howard Baker won over 47% of the votes in his race; Dan Kuykendall was only a point behind at 46%.  Both Baker and Kuykendall had carried Republican East Tennessee but had run well in some areas that had once been solidly Democratic.  Kuykendall and Baker carried Madison County (Jackson, Tennessee) over Senator Gore and Congressman Bass.  The parties had split the four big urban counties of Tennessee between them.  Kuykendall and Baker had won Knox and Hamilton Counties, while Gore and Bass won Davidson and Shelby Counties.  Each of the Republican candidates showed genuine strength in his home area; Baker ran better in Knox County, while Kuykendall ran slightly better in his home of Shelby County.  Baker had won Anderson County, while Kuykendall lost it, but for the most part, the two Republican candidates ran well in the same counties.  Dan Kuykendall lost by 77,000 votes to Albert Gore while Howard Baker lost to Congressman Ross Bass by only 51,575 votes.

The GOP headquarters in Memphis was mostly quiet, as the Republican ticket was losing.  Bob James had narrowly been defeated for Congress by George Grider, who had beaten incumbent Cliff Davis in the Democratic primary.  Lyndon Johnson at the top of the ticket had helped to pull Democrats over the finish line.  Perhaps it might be even more true Barry Goldwater’s presence at the top of the GOP ticket helped to drag many Republicans to defeat.

After having worked so hard for so long, defeat in a campaign is oftentimes very difficult to accept.  By Election Day most candidates and election workers are thoroughly exhausted.  Many Republicans at the headquarters were fatigued and dejected.  Still, one campaign volunteer firmly stated, “We’ve got a lot more work to do, that’s all.”

If it is indeed true that any candidate who cannot be gracious in defeat does not deserve victory, Dan Kuykendall remained positive the night of the election in 1964.  “I want you to know,” Kuykendall told the gathered Republicans, “I shall continue to give my every effort toward a continued strengthening of a conservative Republican Party which will insure [sic] our state of its true voice in national affairs.”

Howard Baker, who is certainly one of the fathers of Tennessee’s modern Republican Party, was no less positive than his friend and ticket-mate Dan Kuykendall.  Baker pledged to do all he could in “furtherance of an effective two-party system for Tennessee.”

“More than any other election year in Tennessee,” Baker said, “the people of the state acted on their choice between issues and positions.”

Both Dan Kuykendall and Howard Baker were not finished with politics or promoting the Republican Party.  Both would figure prominently in the 1966 election.