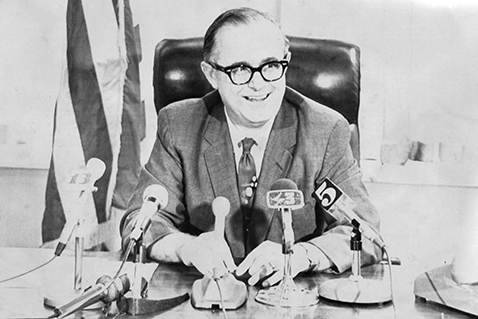 Both of Tennessee’s seats in the United States Senate had been up for election in 1964 due to the death of Estes Kefauver in 1963. Republicans in the Volunteer State had run two serious candidates in Howard Baker Jr. and Dan Kuykendall. Both candidates had won more than 46% of the vote, a new record for a Republican candidate running for the United States Senate in a state that had never popularly elected a GOP candidate to the Senate.

Although both Baker and Kuykendall lost the election, neither man was done with politics. Ross Bass, who had defeated Baker, had to run again in 1966 for a full six-year term. Howard Baker was pondering another Senate race.

In Memphis, Dan Kuykendall was looking at another political opportunity. George Grider, an attorney and former commander of a submarine in the U. S. Navy during the Second World War, had edged past Republican candidate Bob James to win a seat in Congress from Shelby County. Kuykendall seemed the most likely Republican candidate to beat George Grider in the 1966 general election; moreover Kuykendall seemed the best bet to actually win the seat for the GOP.

Harry Carbaugh, chairman of the Tennessee Republican Party and also the Republican National Committeeman for the Volunteer State, had said he would resign after the 1964 election. In January of 1965, Carbaugh announced he was resigning, but wanted Tennessee Republicans to settle on one candidate to succeed him. Both Dan Kuykendall and Howard Baker were mentioned as possible candidates to become state chairman, along with Ken Roberts, who had been the statewide campaign manager for failed GOP presidential candidate Barry Goldwater.

For the first time in the state’s history, Tennessee Republicans were blessed with a surplus of talent in anticipating the 1966 race for the United States Senate. Howard Baker Jr., who had just barely lost in a dismal year for Republicans, was the most logical candidate to run again, if he wished to be a candidate. Bill Brock, who had wrested a seat in Congress from the Democrats in Tennessee’s Third Congressional District, was said to be eager to run against Senator Bass if Baker did not, while Dan Kuykendall was also being talked about as a potential candidate.

As is always the case in politics, not everyone was thrilled by the idea of Dan Kuykendall running for the U. S. Senate once again in 1966. The vote totals in heavily Republican East Tennessee were a testament to the popularity of Howard Baker, who had run much more strongly than had Kuykendall. Dan Kuykendall was also thought by some Tennessee Republicans to have been the driving force behind Barry Goldwater’s campaign in the Volunteer State. Many Tennessee Republicans were resentful of the defeat after three statewide victories by GOP presidential candidates.

There was another big change taking place in Tennessee. Following the Supreme Court decision in the case of Baker v. Carr, the longtime rural domination in the state legislature was about to come to an end. Genuine reapportionment enlarged the representation due to the urban and suburban counties. One man, one vote had come to Tennessee. Dan Kuykendall predicted a bill requiring the election of legislators by individual districts would be adopted by the legislature in 1965.

“Republicans, Negroes and most rural political leaders will favor such a measure,” Kuykendall stated. “We are all interested in forwarding the rights of the individual.”

Indeed, A. W. Willis, who was the lone Black member of the Tennessee General Assembly, was in favor of dividing the urban counties into individual districts. To do otherwise would be unconstitutional, Willis insisted. “It clearly violates the principle of ‘one man, one vote’ laid down by the United States Supreme Court,” Willis said.

Not everyone agreed. James E. Irwin, chairman of the Shelby County Democratic Party, suggested greater representation for Blacks without reapportioning the county into individual districts. That brought a sharp exchange between Dan Kuykendall and Irwin.

“Irwin’s statement is typical of his thinking, his attitude toward machine politics and how little faith he has in the people,” Kuykendall growled. “He is saying to the people of Shelby County, ‘Any legislative district of 40,000 people is not capable of choosing a member of the Legislature.”

“When the Republicans start including Negroes on their ticket so their ticket will represent the entire community, then he will be in a better position to criticize,” Irwin shot back.

Kuykendall poured through the election returns from the 1964 election and was astounded to discover only one candidate who had been elected from Shelby County to the Tennessee General Assembly had carried his own home precinct. “Do we believe in local representative government or don’t we?” Kuykendall demanded. “Do we have it in Shelby County when only one of our 18 legislators was supported by the people in his own precinct?” Kuykendall pointed out that single legislator who had won his own home precinct had been Representative A. W. Willis.

So, too, would reapportionment bring new lines in Tennessee’s congressional districts. The single largest congressional district in the State of Tennessee was that of George Grider of Memphis. Tennessee’s Ninth Congressional District had more than 600,000 citizens while the two districts adjoining it had less than 240,000 residents each. The Memphis Commercial Appeal reported the Shelby County Republican Party supported a redistricting plan that would make Grider’s congressional district wholly inside the county with the remaining 40% added to counties east of Memphis. Many Republicans thought that would allow a Republican to win and most members of the GOP were apparently thinking of running Dan Kuykendall for Congress.

Yet there was the reality that neither congressman from the Seventh and Eighth Congressional Districts would be very pleased about being handed a 20% slice of Shelby County to what were almost entirely rural districts. Tom Murray of Jackson had represented the Seventh Congressional District since 1942 and Robert A. “Fats” Everett of Obion County had represented the Eighth District since winning a special election in 1957 to succeed Jere Cooper who had died in office. Both were very conservative Democrats.

Dan Kuykendall, politically speaking, was a man with options. One of those options was running for governor in 1966, although Kuykendall was closely following the work of the legislature in reapportioning the state. By May of 1965, the Commercial Appeal noted Kuykendall was “an all-but-announced candidate for the House of Representatives” for the redrawn congressional seat. The Commercial Appeal thought Kuykendall had also stepped outside the “Goldwater pattern” in his thinking as the prospective congressional candidate was in favor of a minimum wage law for Tennesseans, highly supportive of the Tennessee Valley Authority, and advocated for bringing Blacks into the Republican Party. The Commercial Appeal agreed Dan Kuykendall was a conservative, but if redistricting took part of Shelby County into the Seventh District, which was represented by the profoundly conservative Tom Murray of Jackson, there would be some irony in the race. The irony would be that Kuykendall in a race with Congressman Murray “would be the ‘liberal’ candidate” in the congressional race.

At the end of May, Kuykendall appeared on a public affairs program on station WHBQ where he broadly hinted he would remain in Tennessee’s Ninth Congressional District. Kuykendall also gave a clear indication he would be a candidate against incumbent Congressman George W. Grider in the 1966 election. Kuykendall’s home was in an area that the legislature had considered placing in the Seventh Congressional District. Evidently, some rural Democrats thought better of it, fearing the Shelby County suburbs would alter the political complexion of the district too much. The Memphis Press-Scimitar reported Kuykendall had announced he would not run in a congressional district in which he did not live.

The election of Julius Hurst as chairman of the Tennessee Republican State Executive Committee signaled the changing nature of Volunteer State politics. It was an acknowledgment by Republicans that West Tennessee was becoming increasingly important to their statewide success. Hurst was the popularly-elected superintendent of schools in McNairy County and had run Congressman Tom Murray in the closest race of his career in 1964. Hurst won a narrow 19-17 victory over attorney John Waters Jr. of Sevier County. Eleven of the nineteen votes received by Hurst came from West Tennessee. Julius Hurst won all but one vote from the West Tennesseans casting ballots at the meeting. Mrs. Millsaps Fitzhugh, the wife of a former chairman of the Shelby County Republican Party, voted by proxy for John Waters.

The struggle for the state chairmanship was fought between the Republican regulars of East Tennessee, many of whom were allied with Howard Baker. Both of East Tennessee’s GOP congressmen, Jimmy Quillen and John Duncan, backed Waters. The third Republican congressman from East Tennessee, Bill Brock, was actually in Nashville for the meeting and lobbied for Julius Hurst. Brock was perhaps the best political organizer in the State of Tennessee. Years later as chairman of the Republican National Committee, it was Bill Brock who set the table for the smashing victory won by Ronald Reagan in 1980. Dan Kuykendall, a West Tennessean, was also backing Hurst.

Hurst came from a highly prominent family in McNairy County whose roots in the Republican Party went back to the Civil War. The Hurst family stubbornly remained loyal to the Union and in fact boldly seceded from the Confederacy, setting up “in one corner of McNairy County the ‘Hurst Nation,’ which kept the Union flag flying practically through the Civil War.”

Throughout the fall of 1965, Dan Kuykendall kept a high public profile, speaking before service and advocacy groups in anticipation of the next election. Speaking before the Engineers’ Club at the Hotel Claridge in Memphis, Kuykendall said he would not be a candidate again for the U. S. Senate in 1966, but indicated he had plans to seek public office. With reference to the recent redistricting which divided Shelby County into three congressional districts, Kuykendall said, “I consider it an equitable settlement.”

Dan Kuykendall was a friendly and loquacious man. It was quite evident that he liked to talk. Kuykendall was critical of Senator Ross Bass and Congressman George Grider, both of whom had voted for repealing section 14-B of the Taft-Hartley labor law. When asked about Grider’s record in Congress, Kuykendall replied, “I believe Grider’s conduct is exactly what he said it would be. People who are surprised at his votes, such as opposing 14-B, never read his platform. You had better start reading the platforms to see what people are going to do. Grider is an honest man, doing what he said he’d do.”

By the end of 1965, Kuykendall was giving full voice to his criticisms of freshman Congressman George W. Grider. Still, there was considerable talk about Kuykendall running for Congress from the Seventh District. The Memphis Press-Scimitar quoted Kuykendall as saying, “Any political ambitions I have in the immediate future would be in the Ninth District.” “Are you listening, George Grider?” the Press-Scimitar demanded.

If anything, Dan Kuykendall stepped up his numerous speaking engagements. It was readily apparent that Kuykendall was a candidate for public office and with his criticisms of Congressman Grider, as pointed out by the Memphis Press-Scimitar, it seemed equally evident in which congressional district he was running. When Senator George Murphy of California, a former movie star, came to Memphis, it was Dan Kuykendall who introduced the legislator to his fellow Republicans.

Howard Baker, a more subdued personality than Dan Kuykendall, was also beginning to make appearances around the state in anticipation of another race for the United States Senate. Local Republicans in Shelby County, including their chairman, a dentist by the name of Winfield Dunn, were highly enthused. With Shelby County’s big population divided into three separate congressional districts, could what had once been the domain of Boss E. H. Crump go Republican? To Democrats, it was unthinkable. To Republicans, it seemed probable. The modern Tennessee Republican Party was about to be born.