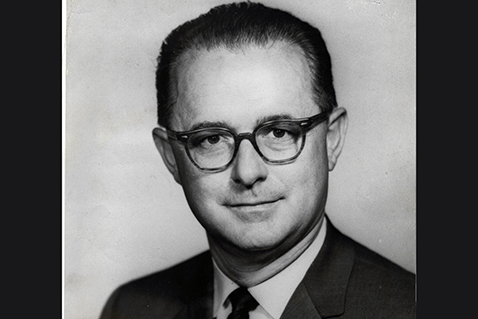 Dan Kuykendall’s family had originally followed a very famous Tennessean to Texas; the Kuykendalls left their West Tennessee home to go to Texas with Sam Houston.  Dan Kuykendall had returned to West Tennessee when his employer, Proctor & Gamble, had sent him to Memphis as a regional manager.  Kuykendall volunteered to help in Richard Nixon’s 1960 presidential campaign and was the campaign manager for GOP congressional candidate Bob James, which quite nearly brought about the defeat of incumbent Clifford Davis in 1962.  In 1964, Dan Kuykendall made the transition to candidate when he challenged Senator Albert Gore.  Both of Tennessee’s seats in the United States Senate were up for election that year due to the death of Senator Estes Kefauver in 1963.  Howard Baker was the Republican candidate for the two remaining years of Kefauver’s term while Kuykendall sought the seat held by Albert Gore for a six-year term.

At the time, Tennessee had never elected a Republican to the U.S. Senate by popular election.  Only in two instances could it truthfully be said the GOP had seriously contested a race for the United States Senate since the Volunteer State began choosing its senators by popular election.  Republicans had nominated what was very likely their strongest candidate in 1916, the first time Tennesseans voted in a general election to select their own U.S. senator; that had been Ben W. Hooper, a former two-term governor.  Hooper won 45% of the vote against then-Congressman Kenneth D. McKellar.  The second time the GOP seriously contested a seat in the U.S. Senate in Tennessee had been in 1948 when former Congressman Carroll Reece had perceived it to be an outstanding year for Republican candidates.  Just two years earlier, Reece, as Republican National Chairman, had presided over a stunning rebuke of Democratic rule when the GOP had won both houses of Congress.  Thomas E. Dewey was thought by practically everyone but Harry Truman to be the next president of the United States.  Republicans confidently expected to increase their majorities in Congress.  Tennessee’s Democrats had just had a bitter bloodbath of a primary for both the governorship and the U.S. Senate.  E. H. Crump, master of the Shelby County machine, had bolted the Democratic Party, refusing to support Harry Truman for reelection, backing Strom Thurmond and the “Dixiecrats” instead.  Reece thought he saw an opening and he and country music legend Roy Acuff ran for the U.S. Senate and governorship as a ticket.  The two drew huge crowds, which seriously frightened the Democrats, but as it turned out, folks were coming to be entertained.  Only one-third of the voters chose Reece and Acuff.

1964 demonstrated things were changing in Tennessee.  Howard Baker and Dan Kuykendall had won the highest percentages statewide ever given to GOP candidates for the United States Senate.  Reapportionment had come to Tennessee, which reconfigured congressional and legislative districts in the Volunteer State.  Republicans were highly energized and while they did not offer up a candidate for governor in 1966, Howard Baker was once again the GOP nominee for the U.S. Senate and Dan Kuykendall was running for Congress in the Ninth District against incumbent George W. Grider.

Unlike most of his contemporaries of the time, Dan Kuykendall had a flair for drawing attention to himself and he was an excellent speaker.  Neither Kuykendall nor Congressman Grider had been opposed for the nominations of their respective parties.  Kuykendall concentrated on building an effective and efficient political organization for the general election.  Kuykendall was running as a critic of the administration of President Lyndon Johnson.  George Grider, a freshman congressman, was running on his record, which of course included support for much of the Johnson program.

Housewives in particular were deeply concerned about rising inflation and the cost of goods.  The Kuykendall campaign was especially effective in harnessing the volunteer efforts of housewives and women during the 1966 campaign.

Dan Kuykendall kicked off his campaign with an outdoor rally at his home 4978 Brookwood Cove in Memphis.  As campaign manager Lewis Donelson began introducing the candidate, Kuykendall’s two-year-old daughter Kay sat contentedly at her father’s feet, preoccupied with crayons and a coloring book.

Kuykendall wasted no time tearing into George Grider’s record, pointing to the congressman’s recent newsletter.  “He himself admitted that on the minimum wage bill, he voted against the will of 63 per cent of his own people,” Kuykendall told the 300 people assembled.  “Several surveys have shown that over 75 per cent of the people of Tennessee strongly favor the right-to-work law my opponent voted to kill it.”

Dan Kuykendall referred to the congressman as “our Washington rubber stamper” and blamed the inflation, the war in Vietnam and rioting on the Johnson Administration.  Kuykendall said he supported federal tax rebates for the states to use for schools and wanted educational expenses to be deductible on income taxes.  The GOP congressional candidate also wanted to repeal limits on the amount of money people could earn while collecting Social Security.

Kuykendall’s showmanship was evident as he welcomed his guests to view the “Great Society Supermarket . . . Grider Branch.”  There were twenty-four items, each labeled with its cost in 1964 and the higher price from 1966 due to inflation.

Richard Nixon had carried Tennessee in 1960 and most political observers had thought the former vice president was dead politically after he lost a comeback bid to be governor of California in 1962.  Nixon was on the campaign trail in 1966 and had received requests to appear for congressional candidates in all fifty states.  Nixon was making a stop in Memphis to campaign for Dan Kuykendall, who would serve as the former vice president’s host for the two-hour visit.

Just before Nixon’s arrival in Tennessee, Congressman George Grider and challenger Dan Kuykendall faced off in a televised debate on a local TV station in Memphis.  The Commercial Appeal published an editorial following the debate and acknowledged at times it seemed the candidates were jostling for “debating points rather than votes,” the newspaper thought “both men were articulate and concise.”  The Commercial Appeal thought the appropriate lines had been drawn and the two candidates “gave Ninth District voters a pretty clear choice.”

Richard Nixon possessed an encyclopedic knowledge of the politics of each state and knew the names and districts of the candidates he was campaigning for; that was quite evident at a press conference the former vice president held at the Holiday Inn-Rivermont.  Nixon predicted the reelection of East Tennessee Congressmen Jimmy Quillen, John Duncan and Bill Brock.  Nixon also forecasted the election of Howard Baker as the first Republican ever to be popularly elected from the Volunteer State.  Lastly, Nixon said he believed Dan Kuykendall would win the election to serve the Ninth District and Julius Hurst would be elected from Tennessee’s Seventh Congressional District.

From the press conference, Nixon traveled to the Memphis Auditorium where a crowd of 3,000 people waited to hear him.  Kuykendall introduced the former vice president as “Mr. Republican.”  Nixon quickly brushed aside the speculation about his running for the 1968 GOP presidential nomination.  “To deny it or confirm it would open the door to 1968,” Nixon said.  “That’s not the wise thing to do in 1966.  My current goal is to campaign for others.  They invited me.  I came.  My current goal is to avoid speculation about 1968.”

Certainly Richard Nixon was focused and properly pummeled the Johnson administration, denouncing it as a failure.  Nixon said the 1966 election was the most important political year of his twenty years of public life “because the fate of the two-party system is at stake and that means the future of our country is at stake.”  Nixon told his listeners in his travels he had come to believe Republican candidates in the South would fare 50% better than they had in 1964.  The biggest issue of the 1966 campaign, Nixon said, was whether or not the people wished to repeat what they had done in 1964 – – -“go all the way with LBJ.”  Nixon noted “most Democrats this year want to run away from LBJ.”

Nixon pointed to the GOP candidates behind him, saying, “These men will not be rubber stamps for LBJ.  We are united and the Democrats are divided.  There’s a new dance sweeping the nation.  It’s the Johnson drag.”

Congressman George Grider, in directly confronting the rampant inflation, described it as one of the prices of the Vietnam War and thought Americans should be willing to pay the price.  “Our boys are sacrificing their lives in Viet Nam,” the congressman said, “while we are financing a major war without wage and price controls.  If we are asked to pay an added price for food, it’s a small enough sacrifice, and I think it is beneath us to complain about it.”  Congressman Grider quickly added the president and his administration were taking “reasonable and measured steps to bring inflation under control.”  The congressman said he would much prefer “today’s economic problems to the recessions under Republican administrations, and I don’t know anyone who doesn’t.”

Congressman Grider kicked off his own general election campaign with House Majority Leader Hale Boggs of Louisiana at the opening of his headquarters.  “I don’t know of any new member who has made a finer impression and done a better job than George Grider,” Boggs said.

Grider realized he was hard pressed by Dan Kuykendall’s candidacy.  The congressman summarized what he thought the 1966 congressional election was about, at least in Tennessee’s Ninth District.

“The challenger – – – and the challengers – – – are the same as in 1964,” Grider cried.  “The issue is the same: Shall we move forward with positive programs to make this marvelous nation still better – – – for all of its people?  Or shall we turn aside from our future as a useless protest against a world that won’t stand still?”

Grider expressed his dismay that a man like Dan Kuykendall was running for office.  The congressman said in fact he found it “hard to believe.”  “His platform takes dead aim on social progress and on responsible and effective government itself,” Grider complained.  Congressman Grider dismissed the visit by Richard Nixon to his district, saying, “(Nixon) is the one man in our country who is certainly the greatest guide that there is through the maze of political issues.  And the reason he knows these issues so well is that he’s been on all sides of every one of them.”

Grider and Kuykendall participated in a program where Memphians could call in with questions and both men seemed to enjoy it.  The congressman pointed out Kuykendall was affiliated with a food products corporation he said was charging 20% more for goods than is “a leading Memphis grocery.”  “I don’t think it comes well from a man making such a profit on grocery prices to moan and groan so much about prices going up,” Grider said.

“This is a perfect example of a runaround if I have ever heard one,” Kuykendall retorted.  The GOP challenger noted he was an official with “a chain of 7/11 drive-in groceries, two of which are in Memphis” rather than grocery stores.  Dan Kuykendall insisted escalating prices were the result of the policies of the Johnson administration.

The two candidates verbally tussled over their differences and neither held back.  As the Commercial Appeal had stated, both Dan Kuykendall and Congressman George Grider were forthright in stating their respective beliefs while managing to remain civil.

With one month remaining before the general election, Dan Kuykendall’s campaign was well-financed and superbly well organized.  George Grider had his hands full.