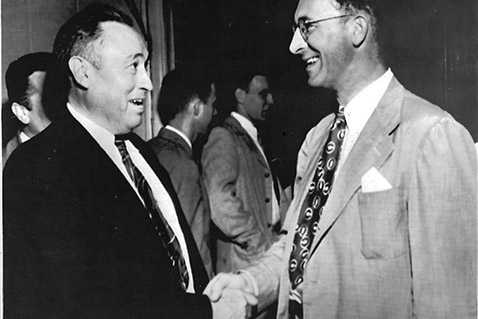 The Democratic primary in Tennessee in the 1948 election had been particularly brutal. Tennessee’s senior United States senator, Kenneth D. McKellar, old and ailing, had tried to change the mind of Shelby County political boss Edward Hull Crump about his refusal to back Senator Tom Stewart for reelection. There are those who believe Will Gerber had whispered into the ear of Crump that Senator Stewart was an anti-Semite, which was not true. Stewart had also almost lost the Democratic nomination in 1942 and had sorely needed the big majority he received in Shelby County, a fact which had appalled Crump.

Will Gerber is worth a mention. I knew his son, Hal, who continued to practice law into his nineties; there wasn’t a finer man anywhere and he was objective enough to realize all too well that his father was a controversial figure. Truth be told, Will Gerber inspired fear and hatred in many in Memphis and Shelby County. Gerber was a Russian Jew, born in a tiny city called Kishinev in southwestern Russia. Gerber’s father managed to get the family to the United States, landing in New York. Eventually, the Gerber family found their way to Memphis. Hal Gerber remembered his own father was likely three or four years old at the time. The elder Gerbers decided to move back to New York, but Will Gerber had met his future wife and remained in Memphis.

Will Gerber worked as a clerk for a railroad company while going to law school at night. Eventually, Gerber was hired by a prominent law firm, McClain & Bejach, which had ties to E. H. Crump. McClain became District Attorney for Shelby County and Lois Bejach (a man despite the name) became a Chancellor on the Chancery Court bench. McClain took Gerber to the District Attorney’s office as a deputy. There Will Gerber flourished and caught the eye of E. H. Crump. Eventually, Will Gerber rose to become District Attorney himself. Some readers will doubtless be surprised to know Ed Crump was a gleeful practitioner of the politics of diversity. Crump installed the first woman judge of the Juvenile Court (and would later remove her when it became shockingly apparent she was corrupt) and only the second woman to be a judge in the South. Crump always balanced his local ticket with a smattering of candidates who represented almost every constituency imaginable. A Jewish District Attorney in Tennessee at the time was certainly a rarity.

Kenneth McKellar had served with no less than seven other men who had represented the State of Tennessee in the United States Senate since he first took his seat in 1917. McKellar endured while the others died, moved onto other offices or were defeated. Senator McKellar did not like Estes Kefauver personally; quite the contrary. McKellar, however, did like Tom Stewart personally and was unhappy that he was unable to change Crump’s mind. McKellar feared Crump’s decision to back John A. Mitchell, an obscure judge of the Circuit Court in Cookeville, would allow Congressman Estes Kefauver the opening he needed to win a plurality of the vote and claim the Democratic nomination for the United States Senate. That fear became reality in the August primary in 1948.

McKellar and Crump had cooperated through the decades and recently had dominated the politics of Tennessee rather completely from 1932 through the 1948 election. The two, like most friends, did not always agree or see eye-to-eye; McKellar and Crump had their tiffs, but unlike the suggestion of the uninformed, the senator was not subservient to Crump. The two were personal friends and political partners; it is certainly true that in Crump’s domain of Shelby County, he reigned supreme. Yet it was McKellar who commanded a large political organization that ran the length and breadth of Tennessee, comprised of the senator’s personal friends, those whom he had given jobs through his vast patronage, and as Congressman Albert Gore later remembered, there was hardly anyone in Tennessee for whom McKellar hadn’t done a favor. It was Kenneth McKellar who set the tradition for service to constituents that local congressmen later followed and made themselves secure in their own districts.

The 1948 election was a blow not only to Crump but also to Senator McKellar. The rise of Estes Kefauver and the young congressman taking the place of Tom Stewart was bad enough, but the revival of Gordon Browning was unspeakably bad, at least in Senator McKellar’s mind. Browning had represented a West Tennessee district in Congress for twelve years and had demonstrated real ability and political know-how in defeating a longtime incumbent in the primary. Gordon Browning lost his first race in the GOP tidal wave of 1920 but came back two years later to beat the Republican incumbent. Browning was nothing if not stubborn and determined. A veteran of the First World War (like his friend Carroll Reece), Browning was a champion for his fellow veterans in Congress. Yet, like many congressmen, Gordon Browning yearned for a seat in the United States Senate. Browning cast his eyes upon the Senate seat occupied by Kenneth McKellar, something the senior senator considered a personal affront. Gordon Browning remembered years later in an oral history that while he had publicly tested the waters to challenge McKellar, he could not get a single endorsement or offer of support from any prominent person in the State of Tennessee. Instead, Browning impulsively ran against Tennessee’s junior U.S. senator, Nathan L. Bachman. Backed by McKellar and Crump, Bachman fought off Browning’s senatorial bid.

Undeterred by his loss, Browning came back two years later and waged a successful campaign for the Democratic nomination for governor in 1936. McKellar had supported his own candidate, Burgin Dossett, while Crump remained silent. At the end of the campaign, the Memphis Boss endorsed Browning, who won. Browning’s strength and name recognition, as well as his ability to campaign – – – and the former congressman was also affable and an able speaker – – – would have won the Democratic nomination even without the massive majority he had received in Shelby County. McKellar had warned Crump about Browning and fretted Browning’s record in Congress demonstrated a lack of support for the Tennessee Valley Authority.

Crump and Governor Browning went through a spectacular falling out that ignited an all-out war inside the Democratic Party, culminating in one of the bitterest campaigns in Tennessee’s frequently bloody and tumultuous political history. Browning had made a determined effort to defang Shelby County politically and Crump cried for aid from Senator McKellar. McKellar and Crump sponsored candidates against Browning and his appointee to the seat in the United States Senate, George L. Berry, who had taken the place of the late Nathan Bachman. Browning had been thrashed in the 1938 primary and had retired to become Chancellor for a group of counties in West Tennessee that had been in his old congressional district. That seat on the Chancery Court had been held by another former governor, Tom C. Rye, for years and Rye had retired in favor of Browning.

Browning tried hard to enlist during the Second World War and finally was recommissioned as a captain in 1943, only a year after having been elected chancellor without opposition. Browning’s friends had run him against Governor Jim Nance McCord in the 1946 Democratic primary in absentia as the former congressman was still in the Army and serving in Germany. Gordon Browning was back home in Tennessee for the 1948 campaign and found Governor McCord heavily disadvantaged by his imposition of a sales tax to aid education. As was almost always the case, Tennesseans may have liked the benefits (such as free textbooks for children), but hated paying for them. Browning never campaigned on the notion of rolling back or repealing the sales tax, but rather proposed to spend the revenue it brought into the state’s coffers. Browning carried every congressional district in Tennessee save for that which comprised Shelby County. Gordon Browning won quite nearly 56% of the vote against Jim McCord. It was an astonishing and notable political comeback.

Gordon Browning and Estes Kefauver were political allies and personal friends and worked well together during the fall campaign. Crump’s announcement he would not support President Harry Truman and intended to bolt the Democratic Party to back States’ Rights candidate Strom Thurmond alarmed some Tennessee Democrats. Senator Kenneth McKellar issued his own statement saying he was a Democrat and warmly endorsed Truman’s presidential candidacy. That endorsement didn’t suit everyone and the senior senator riled the editor of the Dixie Democrat, a newspaper apparently published in Murfreesboro, Tennessee, for the purpose of promoting the “Dixiecrats.”

“Senator McKellar says he will support Harry Truman for president,” the Dixie Democrat huffed. “Since McKellar’s day as a politician is drawing to a close we can’t see that we need him on our side anyway.”

The worry of some Democrats was that Crump would bolt the Democratic Party yet again or offer covert support for the GOP nominees for governor and the U.S. Senate, Roy Acuff and Carroll Reece, respectively. That worry became outright alarm when some 9,000 people materialized for the campaign opener of Carroll Reece and Roy Acuff in Crossville, Tennessee.

Henry A. Wallace, former vice president of the United States for the 1941 – 45 term under Franklin D. Roosevelt, was running on the Progressive ticket for the presidency against Truman. Much of the progressive movement at the time had been infiltrated by Communists, as was proven when the Kremlin archives became public. Wallace was on his way to campaign in Birmingham, Alabama, and stopped in Knoxville where he endorsed the senatorial candidacy of Estes Kefauver. As he stood in his private railroad car, a reporter for the Knoxville Journal noticed the candidate’s white shirt had yellow spots on it from having had eggs thrown at him at a stop in North Carolina.

“I have always considered Estes my very good friend and a devoted friend of the TVA,” Wallace said. “I look up to him as one of the most progressive Democrats anywhere.”

Mrs. Nona Clarke, a Nashvillian who was strongly supporting Wallace’s presidential candidacy, went up in smoke when the Journal reporter asked the former vice president his attitude about Kefauver’s senatorial candidacy. Mrs. Clarke angrily snapped the Journal was biased (it was a staunchly Republican newspaper) and hostile to the congressman’s candidacy. Wallace caught on and murmured, “Well, maybe I shouldn’t have said it. Of course, I don’t know the local situation.” Nona Clarke growled the Progressive Party had “made no endorsements of candidates.” “We’ll talk about that at the convention,” Mrs. Clarke sniffed. When asked by a reporter when and where the Progressive Party convention might take place Mrs. Clarke had to confess she didn’t know. “But we’ll talk about the qualities of other candidates at the convention,” she insisted.

Meanwhile, Carroll Reece and Roy Acuff were campaigning in Cookeville, a profoundly Democratic bastion, where the former congressman warned the audience of Democrats, Republicans and Dixiecrats about the threat posed by Communists. Reece decried Truman took the credit for high wages and the high prices farmers were getting for their products, yet blamed the GOP-controlled Congress for the high cost of living.

Roy Acuff likely dismayed many Republican professionals when he announced he wasn’t going to say anything against his friend Gordon Browning. While the two men disagreed about politics, they were personal friends. Acuff was content to leave the speech making to Reece; his own pitch was simple, evidently extemporaneous, and to the point. Roy Acuff promised, if elected governor, he would be an honest administrator and said he would end the poll tax. “If you’ll pay your poll taxes this time and elect me governor, it’ll be the last time you’ll have to pay it,” Acuff promised. As to the hated sales tax, Acuff made no pledges, saying he “didn’t know enough about it.”

The campaign for the general election had begun in earnest.