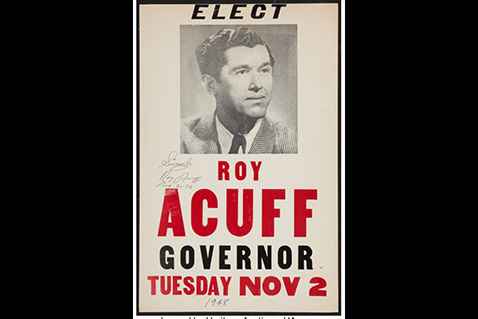 With E. H. Crump saying little or nothing about whether or not he would support the state or national Democratic tickets in Shelby County, the general election campaign in Tennessee continued to be hard-fought. John G. Townsend was a former United States Senator from Delaware who headed the National Republican Senatorial Campaign Committee. Townsend was quoted the first week of October as saying Crump had made a “deal” to support Carroll Reece for the United States Senate. When contacted by members of the press, Crump snapped, “I have made no deal with anyone on anything, from president on down.” According to the Nashville Tennessean’s Washington Bureau, Senator Townsend was quoted as having said, “I haven’t made the deal myself, but I understand that one has been made.” Until recently, the Shelby County political organization and its master had been licking the wounds it had received from its thrashing in the August Democratic primary. Ed Crump had said or done little with reference to politics since both candidates he had supported for the U. S. Senate and the governorship had been soundly defeated. “I don’t believe I could write the word ‘politics’ right now if I had a pencil in my hand,” the Memphis Boss had told one inquiring reporter.

Evidently, the Memphis Boss picked up his pencil and managed to scratch out the word “politics” after all later that night. Crump announced the Shelby County machine would back the presidential candidacy of South Carolina Governor Strom Thurmond in the general election. Tennessee’s senior United States Senator and Crump’s political partner Kenneth D. McKellar issued a statement of his own, saying he would support the Truman-Barkley ticket. Senator McKellar said his friendship with Crump remained unchanged. “It is just a case of honest difference of opinion between us. My friendship for him and my admiration of him remain the same as always,” McKellar said.

The caravan of the Reece-Acuff ticket toured the Third Congressional District, drawing large crowds in Benton and Etowah. Congressman John Jennings joined the program when Carroll Reece and Roy Acuff held a rally in Loudon. Acuff was telling the thousands who attended the Republican rallies he would name the first bipartisan cabinet in Tennessee’s history, having as many Democrats as Republicans in his official family. Reece continued to pound Estes Kefauver for the congressman’s supposed leftwing tendencies.

Even inside Carroll Reece’s First Congressional District, there were a few signs not all was well. The Johnson City Press Chronicle published an editorial stating the newspaper had always been against “Crumpism” which was why it had endorsed the candidacies of Estes Kefauver and Gordon Browning while at the same time endorsing the presidential bid of Thomas E. Dewey and the congressional candidacy of Dayton Phillips locally. “The cleanup of Tennessee, begun in the August primary, should be completed in the final November election,” the Press Chronicle editorial intoned.

While Carroll Reece continued to hammer Estes Kefauver’s liberal politics, the Chattanooga congressman and his allies castigated the GOP senatorial nominee as an isolationist. Apparently, the charge irritated Reece who snapped at rallies in Maryville and Wartburg, “It ill becomes anyone who has never seen the flash of a gun to criticize any veteran who has served his country.” A statement made by the former congressman was frequently cited by his political opponents to classify Reece as an isolationist. What Carroll Reece had said was, “To really know war you have to be in one. I hope no American boy will ever again have to go through what I did.”

Reece then described the three things he believed the United States should do to avoid war: “First keep America so strong that no nation will attack her.

“Second, cut the would-be aggressors completely off from our war secrets, our war supplies, and the machine tools that build war machines. Without our help, Russia and her satellites can never catch up with us. And this left-wing policy of strengthening our potential enemies must be stopped.

“Third, elect an administration and a senator to support it, that would not have been a party to the Yalta, Tehran and Potsdam agreements which brought about the present world situation.”

While campaigning in Oak Ridge, Carroll Reece told an audience, “When I was lying in the mud of France, I had ample time to contemplate the smallness of the world.”

Congressman Estes Kefauver continued to stress those issues he believed to be important to voters in Tennessee, which included such traditional pocketbook issues as the cost of living and the role of the United States in keeping the peace of the world. Kefauver also stressed his support for legislation for various groups such as veterans, organized labor and farmers. The Chattanooga congressman also reminded Tennesseans of his support for the Tennessee Valley Authority and Social Security. Kefauver was not a particularly good orator; in fact, those who knew him best frequently recalled the Chattanoogan was a wretched speaker. Yet Kefauver proved to be a truly gifted practitioner of retail politics. By the time Estes Kefauver died, Lyndon Johnson paid him tribute as “The greatest campaigner of them all.”

“People of the Volunteer state of Tennessee whose matchless fighting forces have always marched in the vanguard of American defense whenever our flag was threatened or our liberties were imperiled deserve better representation in the senate of the United States than would be provided by a man who voted against every measure in the interest of national security and national defense up to the very hour when the Japanese bombs struck at Pearl Harbor and proclaimed our entrance into World War II,” Kefauver cried.

By October 10, the state GOP headquarters estimated more than 150,000 Tennesseans had seen and heard the Reece – Acuff traveling road show during the first three weeks of the campaign; it was for the time, an astonishing rate of 50,000 people per week. When Roy Acuff had first decided to run for governor, he had pledged, “If the people of Tennessee see fit to give me this nomination I’ll make a campaign the like of which has never been seen in Tennessee before.” Yet throughout the campaign, Acuff kept his promise not to use negative campaigning, as he and Gordon Browning were personal friends.

“There’ll be no mud-slinging. If I have to criticize my opponent, I’ll withdraw,” Acuff said. “Gordon Browning is my friend. I introduced him to more than 10,000 people during the fourth of July weekend,” Acuff pointed out. “I told folks he was a good man. I haven’t changed my mind.” To the despair of some Republicans, Roy Acuff continued to campaign, telling voters at rallies to “vote the way you want to.” Acuff wasn’t even in Tennessee when he had won the GOP gubernatorial nomination, as he was in California making a movie.

The Nashville Tennessean continually pointed to Carroll Reece’s record in Congress where the East Tennessee congressman had attacked Jim Crow laws and reminded readers Reece “thought it was a disgrace that a federal anti-lynching law was not enacted.” The Tennessean accused Reece of having ignored his own past record to flirt with the Dixiecrats as “his schedule took him in hailing distance of Mr. E. H. Crump.” The Tennessean editorial marveled it was one of “the high points of an already amazing campaign.”

The Chattanooga Daily Times, which was fervently backing Estes Kefauver, published an editorial reminding its readers Reece had been determined to have been 39% disabled by the Veteran’s Administration and as a retired officer from the First World War, the former congressman collected a pension of $150 per month. “He had already collected $36,000 on the pension,” the editorial noted. “He married into a very wealthy family and he, himself, has made an outstanding success with some banking interests he owns in Tennessee,” the editorial stated.

“Of course, any war veteran who is disabled is entitled to the pay,” the Chattanooga Daily Times editorial piously opined, “and no criticism can be laid against him for accepting it no matter how wealthy he is in his own right.” Evidently, the point of the entire recitation of the editorial was to remind readers Reece had voted against “the emergency housing law to aid war veterans.” Never mentioned was the fact one big reason for Carroll Reece’s immense personal popularity inside his own First Congressional District was the fact throughout much of his service, veteran or their widows and orphans did not have pensions or disability benefits. At the time, the only pensions or disability benefits came from congressmen introducing special bills to provide them for specific individuals. Carroll Reece was said to have introduced more such bills during the decade of the 1920s than any other member of the House of Representatives. Indeed, throughout his twenty-six years in Congress, Carroll Reece remained enduringly popular with his fellow veterans and their families.

Reece did have editorial support in Tennessee, most notably from his friend Guy Smith, editor of the Knoxville Journal and chairman of the state Republican Executive Committee. Like most everybody else, Smith presumed Thomas E. Dewey would be the next President of the United States. In an editorial Guy Smith wrote, “With Dewey in the White House, Rep. Kefauver’s only function in the Senate would be to vote ‘no.’ That is not the kind of representation this great state deserves.” The Johnson City Press Chronicle reprinted a portion of an editorial published by the Chattanooga Daily Times which stated it thought “Dewey would shed no tears over the defeat of the reactionary Mr. Reece, who fought him at Philadelphia and who represents the very ills in the Republican party Mr. Dewey seeks to cure.”

Tom Dewey throughout the 1948 campaign had thoroughly irritated a goodly number of Republicans in various states by remaining silent as to his personal support for a number of incumbent GOP senators who were deemed perhaps too conservative. Dewey never appeared in West Virginia nor endorsed the candidacy of Senator Chapman Revercomb, who was being pilloried by much of the press in the country for the immigration reform legislation he had passed, which some asserted was too restrictive and prejudiced. Nor did Dewey have much to say about Senator Wayland “Curly” Brooks of Illinois, who had the enthusiastic backing of devoted isolationist Colonel Robert McCormick, publisher of the Chicago Tribune. Opponents of Carroll Reece in Tennessee delighted in noting the former congressman, long affiliated with the more conservative wing of the national Republican Party, had never been officially endorsed by his own party’s presidential nominee. It was all the more harmful due to the fact most everybody believed Thomas E. Dewey was the next President of the United States.

The Chattanooga Daily Times also tried to compare the decade of service in the House of Representatives served by Estes Kefauver to the twenty-six years in Congress served by Carroll Reece. The newspaper pointed out Reece had introduced 94 bills as compared to 151 sponsored by Kefauver. The Chattanooga Daily Times blithely wrote it had discounted “the 1,217 private relief bills introduced by Reece or the 46 introduced by Kefauver” while noting five of the bills sponsored by Carroll Reece had become law while nine of Congressman Kefauver’s had become law.

Virtually all of the “private relief bills” sponsored by Congressman Carroll Reece had been for the benefit of veterans or their widows and children.

The press in Tennessee was divided along partisan lines, as well as of conservative versus liberal. To those supporting Carroll Reece, Congressman Estes Kefauver was a radical liberal who did not represent the thinking or values of the Volunteer State; to those supporting Kefauver, Reece was a heartless Republican who supported the predatory special interests over those of the people of Tennessee.

Unlike the heated race for the U. S. Senate, GOP gubernatorial nominee Roy Acuff stuck to his pledge not to be critical of his friend Gordon Browning. Nor did Browning denounce Roy Acuff. It may well be the most gentlemanly governor’s race in our state’s history.