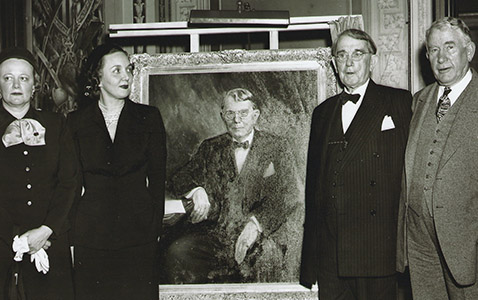 For the first time in decades, Republicans in Tennessee were seriously contesting the race for the United States Senate in 1948. In fact, Republicans had fielded a compelling statewide ticket composed of former congressman Carroll Reece for the Senate and entertainer Roy Acuff for governor. With the expected national victory of GOP presidential candidate Thomas E. Dewey, Tennessee Republicans thought the spilt in the Democratic Party afforded them a rare opportunity in the Volunteer State.

The editorial appearing in the Knoxville News-Sentinel endorsing Democratic gubernatorial candidate Gordon Browning came down heavily upon Roy Acuff’s background as an entertainer. The Sentinel opined Browning should have faced no opposition in the general election and sniffed the best the Republicans could do for a nominee was “a hill-billy entertainer and fiddler.” The editorial expressed surprise at the notion there were those who believed Acuff was qualified to run the “$100 million annual business of the State of Tennessee.” The editorial appearing in the Knoxville News-Sentinel rather self-righteously noted that, “In some partisan circles, people are trying to act offended because the News-Sentinel, along with most other newspapers across the state and along with most citizens who put Tennessee’s welfare above purely selfish political motives, is being outspoken enough to challenge Roy’s qualifications to be Governor.” The editorial, which published a photograph of Gordon Browning in uniform from the Second World War, as well as one of Roy Acuff holding his fiddle, stated, “However, if Roy and his political handlers are offended because his candidacy is not being taken seriously, Roy himself is solely to blame.” The News-Sentinel editorial insisted Carroll Reece and Roy Acuff were “not seriously campaigning for public office.” Instead, at least according to the Knoxville News-Sentinel, “They are clowning it. They have reduced the deadly serious business of government to the level of a circus sideshow.” The editorial complained, “Reece smirks and plays the mouth-harp” while “Acuff, in a bizarre Hollywood-style suit of clothes, cracks corny jokes, balances his fiddle-bow on his nose and promises to broadcast his hill-billy radio program from the State Capitol Building if he’s elected.” The editorial huffed the side-show of the Reece – Acuff caravan had indeed been a popular attraction, stating, “In fact, the grand total of those who have seen the show must equal the number of all qualified voters in Tennessee.” As the Knoxville News-Sentinel editorial writer clutched his pearls and reassured Browning supporters many of those in the audience had never voted and never intended to; while many others were not yet of voting age, and others “attended out of sheer curiosity.”

Carroll Reece had been in Congress for twenty-six years and had served for two years as Chairman of the Republican National Committee. Reece was very well known in national GOP circles and the former congressman certainly had his own boosters in the news media of the day. Colonel Robert McCormick, the publisher of the Chicago Tribune, hurled an accusation at New York Governor Thomas E. Dewey, saying the GOP presidential nominee was not doing enough to bolster Reece’s senatorial bid. According to the Colonel’s biographer, David M. Kennedy, McCormick’s “detestation of the New Deal was bottomless.” McCormick and fellow publishers Joe Patterson of the New York Daily News and Cissy Patterson of the Washington Times-Herald were once labeled by fellow publisher Henry Luce (he published Time magazine among others) “the three furies of isolationism.” Specifically, Colonel McCormick was hardly an admirer of the New York governor, saying Dewey had been “the least worst” of the GOP presidential possibilities outside of Senator Robert A. Taft of Ohio. There had long been rumors either Dewey or his vice presidential running mate, Governor Earl Warren of California, would visit Tennessee to help the national ticket and the statewide campaigns of Carroll Reece and Roy Acuff.

The Kingsport News published side-by-side articles written by reporter Bill Freehoff contrasting the careers of senatorial nominees Carroll Reece and Congressman Estes Kefauver of Chattanooga. The headlines affixed the articles somewhat revealed the content: “Carroll Reece Serves Public With Loyalty” while that of the former congressman’s opponent read, “Kefauver Has Good Record of Liberalism.” “Indeed, if there is one personality trait that sticks out above all others in Carroll Reece,” Freehoff wrote, “it is loyalty. It has been said he never forgets a friend and was never too busy, while in Congress, to do a favor for a constituent.” Bill Freehoff’s profile of Kefauver was reasonably fair with the reporter writing the Chattanooga congressman was the best known of Tennessee’s ten congressmen outside of his own district. According to Freehoff, the forty-five-year-old Kefauver was “well-known on a national scale for his efforts as a political reformer and as a champion of liberalism.”

Reece had been injured when he fell from the speaker’s platform while campaigning in McMinnville in Warren County. Reece had stepped backward and fell from the platform to the ground six feet below, bruising several ribs and spraining his back. Still, the former congressman, despite an aching back, gamely campaigned in Gallatin in Sumner County where he and Roy Acuff spoke before what they believed to be the largest crowd they had drawn to date during an afternoon.

Further evidence of Tennessee being a “battleground” state during the 1948 election, was the States’ Rights presidential candidate had traveled to the Volunteer State to campaign and had the support of E. H. Crump, leader of the Shelby County political machine. Senator Bob Taft, “Mr. Republican”, had campaigned in Nashville and Knoxville for the GOP ticket. Senator Alben Barkley, the old warhorse of the Democratic Party and Harry Truman’s vice presidential running mate, came to Tennessee to campaign for Gordon Browning and senatorial candidate Estes Kefauver.

Alben Barkley was one of the most seasoned of the Democratic Party’s roster of campaigners. Barkley had traveled innumerable miles across the country to campaign for fellow Democrats running for the White House to the Court House. Barkley was also an orator of some considerable reputation and oftentimes left Washington to speak to groups to help pay for his invalid wife’s medical care. Senator Barkley came to Nashville where his speech at Ryman Auditorium was carried over a national radio hookup. Despite the division inside the Democratic Party, Barkley received a warm welcome in Tennessee, a state renowned for its hospitality. Perhaps a couple of hundred students from Vanderbilt University’s Young Democrats Club greeted Barkley at Berry Field in Nashville when the vice presidential candidate’s plane landed. Tagging along on the United Airlines chartered flight was Congressman Estes Kefauver. As Barkley walked on the flag-bedecked stage of the Ryman Auditorium while a band played “Dixie” and “My Old Kentucky Home” the crowd jumped to its feet and lustily cheered the senator. The 200 students from Vanderbilt entered the auditorium as a block, ringing cowbells, flourishing banners, and crying out, “We want Barkley!” Scattered among the vast audience were Pat Sutton, the Democratic nominee for Congress from Tennessee’s Seventh District; Congressman Joe L. Evins, congressman from Tennessee’s Fifth District; Silliman Evans, publisher of the Nashville Tennessean; legendary Tennessee General Assembly member Jim Cummings of Woodbury; and a host of others.

The senator was introduced by Nashville Congressman J. Percy Priest, a former Tennessean reporter, who assured the crowd Barkley was indeed the next vice president of the United States. Barkley told the assembled Democrats the life and further development of the Tennessee Valley Authority were in question should the Republicans win the general election. Barkley offered praise for one of Tennessee’s most famous native sons, former Secretary of State Cordell Hull, whom the Kentuckian praised as “one of the greatest, if not the greatest Secretary of State” in America’s history. Barkley heaped ridicule upon his colleague Senator Bob Taft who had made the odd suggestion one good reason for the Republicans to elect Roy Acuff governor was because a Republican could be appointed in the event aging U. S. Senator Kenneth D. McKellar should die in office. “Sen. Kenneth McKellar might die one of these days and they want a Republican senator appointed,” Barkley thundered.

The Kentuckian said a vote for Strom Thurmond and the States’ Rights Party or a ballot cast for Henry Wallace and his Progressive Party was in reality a vote for the Republicans. “On Jan, 3, 1949, I hope to welcome Estes Kefauver into the United States Senate,” Barkley cried. “I will not take inauguration as vice president until Jan. 5.” The senator urged Tennesseans to vote both Kefauver and gubernatorial nominee Gordon Browning a big vote in November.

Charles Fontenay, a Tennessean reporter covering the Kefauver campaign (and later biographer of Estes Kefauver), gleefully wrote Carroll Reece had been greeted with “boos and cat calls” while campaigning in Clarksville, Tennessee. Fontenay wrote the GOP senatorial nominee “became confused, stammered, and grasped the microphone with both hands as loud conversation in the audience in the large Gracey tobacco warehouse almost drowned out his amplified voice.” There were shouts of “Sit down” hurled at Reece as well as cries “Roy! Where’s Roy?” from some in the impatient audience. “Will you boys kindly give attention until the other part of the program is finished!” Reece asked some younger audience members, who replied by stamping their feet and bellowing, “We want Roy!”

Campaigning in Kefauver’s home city of Chattanooga, Alben Barkley received at least as warm a welcome as he had in Nashville. 1500 people crowded into the Memorial Auditorium in Chattanooga to hear the vice presidential candidate praise Kefauver and hammer at the Grand Old Party. Barkley once again endorsed Kefauver’s senatorial candidacy saying the congressman “is progressive, he is liberal, he is forward-looking – – – I know him because I have worked closely with him.” Alben Barkley also defended Kefauver from accusations by Republicans who insisted the congressman was too liberal. “Because of his progressivism they say he is a Red,” Barkley intoned in his mellifluous voice. “Well, he’s the same kind of Red that I am. I sat at the feet of Woodrow Wilson and learned progressivism and liberalism.” Barkley said what he learned from Wilson was government must be “the servant of the people and not the master.” Kefauver, Barkley said, believed in moving things forward and stated he was pleased to recommend the congressman to Tennesseans to serve as their senator.

Barkley, as usual, left no stone unturned and also had praise for congressional nominee James B. Frazier Jr. Barkley said Frazier was “a man of distinguished ancestry and a man of ability” who “will make a capable successor to Rep. Kefauver in the House.”

The Chattanooga Daily Times acknowledged Barkley was a “gifted speaker” who had held the audience “spellbound” for half an hour. In his introduction of Barkley, Estes Kefauver recalled he had once been part of a congressional party to Cairo, Egypt and the Kentuckian had also been a member of the delegation. Kefauver said he well remembered riding a camel as did Barkley. The Kentucky senator noted in his own speech, “I have ridden almost every form of an animal, but no one ever saw me astride an elephant.”

As Barkley came to the conclusion of his talk, he told the crowd that the Republicans had an unfortunate habit of “throwing the American people into such fits that the people have been forced to call a Democratic doctor to cure them.”

Two weeks remained until voters in Tennessee went to the polls.