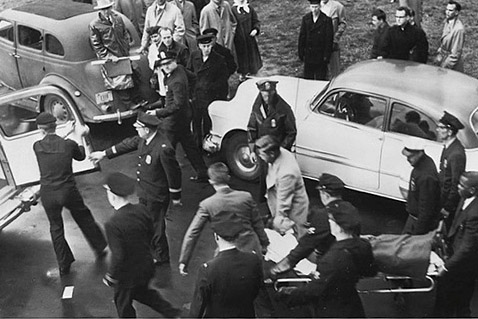 Congressman Clifford Davis of Memphis had quite nearly been upset in the 1962 election by, of all things, a Republican. Davis had easily won the Democratic primary that same year, beating two opponents for the Democratic nomination. Yet there had been signs of political decay inside the congressman’s base of support. Tennessee’s Ninth Congressional District was comprised of Shelby County and more than 600,000 residents. Once the dominion of Edward Hull Crump, it had been the Memphis Boss who had summoned then-congressman Walter Chandler home to serve as mayor of the Bluff City. Crump had likewise handpicked Cliff Davis to go to Washington and serve in the House of Representatives. For twenty-four years, Cliff Davis had remained in Washington, D.C. There had been rumors Crump had determined to remove Davis from the House, but Puerto Rican nationalists coming into the House Gallery and opening fire upon unsuspecting congressmen below changed Crump’s mind. Cliff Davis was one of several congressmen wounded by the Puerto Rican nationalists and a wave of sympathy and support engulfed the congressman, causing Crump to decide the timing was not right to replace Davis in the House.

Considering seniority is oftentimes synonymous with power in Washington, one wonders why Crump would wish to replace Clifford Davis with another man. It is certainly true the Memphis Boss could be difficult to get along with over a period of time. James A. Farley, chairman of the Democratic National Committee and Postmaster General in the first two administrations of President Franklin D. Roosevelt, knew the Memphis Boss relatively well. Farley once said the only person Crump seemed to be able to get along with over a period of time was Senator Kenneth McKellar. Clearly, Cliff Davis had not acquired the kind of committee assignments usually held by a longtime incumbent. There were rumors about the congressman’s drinking. Prospective opponent, George Grider, a member of Shelby County’s Quarterly Court (the equivalent of today’s county commission), was officially exploring a race for Congress against Davis inside the Democratic primary. In discussing the race, Grider gave none too subtle hints about “sober” leadership and “sober” judgment. One can draw one’s own conclusions as a result.

The idea a Republican could be competitive in a district once so overwhelmingly Democratic was a shock to many. That same GOP candidate who had quite nearly toppled Cliff Davis from his seat in Congress, Bob James, was off and running yet again in 1964. The fact Congressman Cliff Davis was politically vulnerable lured opponents into the race. George Grider and state Senator Frank White were off and running for the Democratic nomination, while Bob James was gearing up for the general election contest. Yet by the end of April 1964, no candidate had officially announced his candidacy, Cliff Davis included.

The presidential candidacy of Arizona U.S. Senator Barry Goldwater had fired up many Tennesseans and early polling gave him a large lead over President Lyndon Johnson. An interesting phenomenon was observed by one writer for the Memphis Commercial Appeal. Evidently, a goodly number of those sporting Goldwater campaign buttons seemed to be also supporting George Grider for Congress. Some readily admitted they intended to vote inside the Democratic primary and then support Goldwater in the general election. When asked, “one pert young Goldwater” supporter replied, “We just want to make sure we get rid of (Representative Clifford) Davis.” Grider was considered to be the most liberal candidate running for Congress in the Democratic primary and many Republicans reasoned he would be the easiest for Bob James to beat in the general election.

Grider was off and campaigning and claimed Memphis and the Mid-South were not getting their fair share of federal defense projects. Longtime incumbents always point to their seniority, which they have accrued due to their long service. That same long service usually is accompanied by very good committee assignments and the ability to produce projects and federal dollars for that incumbent’s district or state. Challengers to veteran incumbents necessarily had to be critical of the incumbent’s efforts, or portray the incumbent as ineffectual. George Grider, a veteran of the Navy, noted, “A city like Atlanta or a region like California enjoys a boom based on their biggest industry – – – defense – – – while Memphis and the Mid-South have pitiful shares.” Speaking before a local service club luncheon, Grider promoted the area, saying Memphis and the Mid-South had “natural assets” such as “Location, people, power and transportation” required to become a hub of the federal defense industry.

Cliff Davis concentrated less on speeches than the ordinary daily tasks which keep congressmen busy. Davis was one of several members of the Tennessee Congressional delegation who honored Swinton Alphonse Roof, a seventeen-year-old orphan, who was honored by organized labor in Memphis at a banquet. The Memphis Commercial Appeal’s Clark Porteous wrote, “No Memphis high school athletic hero ever received the acclaim accorded a star student who wants to do research in physics.” Porteous thought the event was one of “organized labor’s finest hours” in Memphis celebrating the accomplishments of Swinton Roof.

The young scholar lived with his four young sisters and was one of six winners of a National AFL-CIO $6,000 scholarship, which Roof intended to use to attend Southwestern College. Cliff Davis was one of the thousand people who gathered at the auditorium for the banquet. Mayor William B. Ingram presented Roof with the key to the City of Memphis. Senator and Mrs. Albert Gore were on hand, as were Congressman Ross Bass and his beautiful wife, Avanell. Gore and Bass were running for the United States Senate that year.

Swinton Roof’s late father had been a member of the Steamfitter’s Union before his death from cancer in 1961, which presented the youngster with a brand new typewriter. The local Barber’s Union gave Swinton Roof a certificate awarding him 24 free haircuts, while Local 731 of the International Union of Electricians gave the young scholar a gift certificate for $25.

The speaker for the evening was Victor Reuther, brother of Walter, who was the president of the United Auto Workers. Victor Reuther was the director of foreign affairs for the AFL-CIO. Three of Swinton Roof’s four sisters were in the audience and clearly delighted by their brother’s success as prominent people heaped praise upon his achievements. Clark Porteous wrote, “Thru it all, Swinton kept his calm modesty, speaking seldom and replying politely to questions.”

That same day Cliff Davis made the announcement of yet another perk of incumbency; the congressman’s office revealed the names of two young Memphians whom he had appointed to the Air Force Academy at Colorado Springs. The Commercial Appeal reported both Kerry Edward Killebrew and Richard Hunter Smith were “A” students and seniors at Overton High School.

On April 24, 1964, Bob James, who had missed toppling Cliff Davis from the House of Representatives two years earlier, made it official; he was running again. “I am only one person, but I am one person,” James told those gathered for the announcement. “I cannot dodge the responsibility that falls on all of us to bring about better government.”

Bob James ripped local Democrats, saying, “for too many years, Democratic administrations have sought to solve the problems of mankind by increasing the size and power of Government.

“And in our local governments we see: corruption, dishonesty, and mismanagement involving many persons running our election procedures; an old, slow, petti-fogging machine creaking along with too many hangers-on; clowning exhibitionism, pettiness and childishness in city government; and spending gone out of control for extras and frosting in all governments when we haven’t even started paying for the cake, itself.”

James hit the administration of Governor Frank Clement (a candidate for the Democratic nomination for the United States Senate) as weak and inept. Bob James charged the Johnson administration of “fiscal double talk, Texas cover-up, fortune building and traffic speed up,” which was a presumed reference to LBJ’s reputed speeding in his Lincoln Continental on his ranch. As for Congressman Clifford Davis, James said the incumbent “travels more, votes less, brags more and does less than any man in the United States Congress.”

Carrie Davis, the wife of the congressman, generated considerable publicity with the announcement she would be the presiding officer and “official greeter” at the “Breakfast With the First Lady” event sponsored by the Congressional Club at Washington’s swanky Sheraton Park Hotel ballroom. The brunch was expected to host 1,000 people to meet and greet Ladybird Johnson.

The vivacious Mrs. Carrie Davis was a leader of Washington society. “Why, people call me a walking Chamber of Commerce for Memphis,” she told a writer for the Commercial Appeal. The congressman’s wife said numerous people from Memphis wrote her asking for tourist information about Washington, D.C. They were especially interested to know how they could visit the White House “without waiting in line.” The family room at the Davis home near Chevy Chase, Maryland, was a constant reminder of the Memphis connection. A hand-carved wooden seal of the City of Memphis hung over the entrance of the family room while framed scenes of the Mississippi River lined the walls.

Mrs. Hale Boggs, herself the spouse of a Louisiana congressman, said, “Everyone in Washington knows Carrie, and they all know she’s from Memphis.” Lindy Boggs was described as one of Carrie’s best friends. “I’ve never known a woman to be so well liked and well thought of by everybody…  old and young, men and women, Democrats and Republicans… all ages love her,” Lindy Boggs explained.

Even President Lyndon Johnson gave a testimonial to the formidable Carrie Davis. “Mrs. Davis is a can-do woman. If you want something done, put it in Carrie’s hands,” the president said.

Carrie Davis was evidently a practical woman and said the couple planned to return to Memphis once her husband retired. “Washington is fine if you are in the swim of things, but it’s no place to be if you aren’t in the water,” Mrs. Davis said.

Carrie Davis’ effectiveness was evidenced by the fact no other person had ever been twice elected to the presidency of the Congressional Club in its 56-year history. Mrs. Davis had also been the honoree at a special “Salute to Carrie” luncheon of some 500 people from both sides of the aisle in Washington, D.C.

On the same day, it was announced Congressman Cliff Davis would serve as the head of a special House committee designed to “expedite President Johnson’s $228 million program for the under-developed 10-state Appalachia region.” Davis consulted with Speaker of the House John McCormack and Majority Leader Carl Albert of Oklahoma and promptly declared hearings would occur the following week. Naturally, the Memphis newspapers ran pictures of Cliff Davis meeting with Speaker McCormack and Majority Leader Albert. It was another reminder of Cliff Davis’ seniority in the House of Representatives.

The appointment also gave the Commercial Appeal the opportunity to publish an editorial solemnly intoning about the “added responsibility” and the “special distinction” which had come to Congressman Clifford Davis. The longtime congressman adroitly used his incumbency to keep himself before his constituents. Davis was pictured by the Commercial Appeal giving a rose to Miss Carolyn Adair of Memphis, the acting “Maid of Cotton.” The congressman gave a luncheon in Miss Adair’s honor and guests included Tennessee’s junior United States senator, Herbert S. Walters, as well as Congressmen E. C. Gathings of Arkansas, Tom Abernethy of Mississippi, and Tennesseans Bill Brock, Jimmy Quillen and Bob “Fats” Everett.