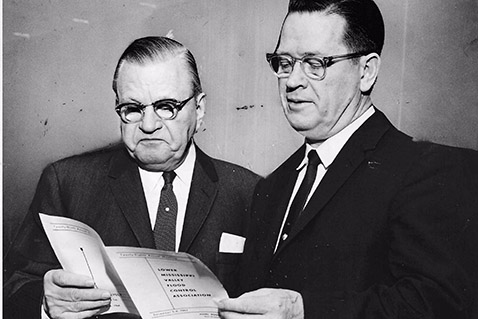 Clifford Davis had represented Shelby County in the U.S. House of Representatives for twenty-four years when he announced he was running for his fourteenth term in 1964.  Davis had been the Democratic nominee in a 1940 special election and had won again in the November general election later in the year.  Davis had long been a highly popular local officeholder, which is precisely why E. H. Crump, leader of the Shelby County machine, chose Davis to succeed Walter Chandler in Congress.  Chandler had been a very able congressman, but Crump had summoned him home to serve as mayor of Memphis.

Davis had gained some notoriety as one of the congressmen shot on the floor of the House when several Puerto Rican nationalists opened fire on the unsuspecting representatives from the galleries.  In twenty-four years, Cliff Davis had only really had two serious challenges to his continued tenure in the House of Representatives.  The first had come in the 1950 Democratic primary.  The opponents of Crump, emboldened by the showing of Estes Kefauver and Gordon Browning, known to be hostile to the machine, had polled a respectable number of votes in Shelby County.  John B. McKinney had run against Davis and won only a third of the vote.

The second challenge came in the 1962 Democratic primary when Davis had faced two challengers, both of whom were progressives.  Cliff Davis won easily, although there were signs the congressman’s support was slowly eroding.  Davis won the primary with a plurality, while the combined votes of his opponents constituted a bare majority.  The true shock had occurred in the 1962 general election where Congressman Davis was quite nearly upset by Republican Bob James.  Davis won by little more than 1,200 votes.

Once any politician has demonstrated electoral weakness, he or she becomes a target for defeat.  Bob James was running again in 1964 and Congressman Cliff Davis had drawn two opponents inside the Democratic primary.  George Grider was a member of the Shelby County Quarterly Court (the forerunner of the county commission), retired from the U.S. Navy and was a practicing attorney.  Frank L. White was a forty-year-old who had rapidly advanced from the Tennessee House of Representatives to the State Senate and was continuing his upwards trajectory.  White described himself as a conservative, while George Grider was considered the liberal in the race.

With Davis occupying a more conservative political stance, some of the congressman’s supporters worried White would pull votes from Davis rather than split the opposition vote.

The contention of both Frank White and George Grider was that Clifford Davis was neglecting his responsibilities as a congressman while physically incapacitated.  “I think I’m too busy to get into mischief that some would say I have,” Davis said.

One of the dangers faced by incumbents is challengers attempting to lay every ill at their feet.  George Grider, speaking to the East Memphis Optimist Club, said Congressman Cliff Davis had failed to “lift a finger to clean up the mess” in the House Public Works Committee.  Grider pointed to recent press reports of “political favoritism” in selecting the committee staff.  “When you use your seniority to impede the workings of democracy, to take care of your henchmen, to do favors for your political associates in contempt of the national welfare, then eventually the citizens realize what is going on,” Grider told the Optimists.

Congressman Davis attended the annual picnic to celebrate the Fourth of July holiday at St. Peter’s orphanage, which drew an astonishing estimated 10,000 people.  Davis handed out half-dollar coins with the face of the late John F. Kennedy on them to the youngsters.  “I’ve been coming to this picnic for 50 years, and not just on election years,” Davis told a reporter.

Cliff Davis received an endorsement from Tennessee’s junior United States senator, Herbert S. Walters.  “Mr. Hub” was one of the most prominent Democrats in Tennessee, a millionaire businessman and prolific fundraiser for Democratic candidates and the party. Walters had been appointed to the United States Senate by Governor Frank Clement to serve out the term of the late Senator Estes Kefauver, who had died in office.  Walters, then in his seventies, did not seek to fill out the two years remaining in Kefauver’s term, as Clement and Congressman Ross Bass were waging a spirited battle for the Democratic nomination for the Senate seat.

Senator Walters released a statement praising the “Dean of the Tennessee delegation” and Davis’ “record of achievement.”  The lengthy statement ended with Walters stressing from his “first-hand knowledge of the requirements of a good congressman,” the senator stated his own belief Cliff Davis was “the best qualified candidate to represent Shelby County in the House of Representatives.”

Nick Carimi, a “lifelong friend” of Cliff Davis and the owner of the Broadway Drug Company, hosted a luncheon where the congressman explained his vote for the recent pay-raise bill for members of the House.  “I predict the day may well come when only wealthy people will be able to run for Congress because of the expense of running for office and living in Washington,” Davis said.

By June each of the candidates, including Republican Bob James, had opened campaign headquarters.  George Grider even had a bird dog named Sam as his campaign’s mascot.  The Republicans had gathered together to support James along with their candidates for the United States Senate, Dan Kuykendall and Howard Baker.  That same day Mrs. Kuykendall gave birth to a baby girl.

With less than one month before voters went to the polls, the Memphis Commercial Appeal endorsed incumbent Clifford Davis for reelection to the House of Representatives.  The newspaper editorial reminded readers of Davis’ long tenure in office, as well as the fact he had made many friends in Washington, D.C. and a telephone call from the congressman frequently could accomplish things for the folks back home.

The Commercial Appeal repeated an accolade given Congressman Davis by the late Speaker of the House Sam Rayburn, who had praised the Tennessean’s handling of the self-financing bill for the Tennessee Valley Authority.  Rayburn had stated, “Davis was the only man who could handle it and TVA should be eternally grateful.”

The newspaper endorsement pointed to the congressman’s vitality despite his age, noting “his present pace astounds friend and foe alike.”  “He is doing the thing he likes the best . . . selling the brand of Davis service only he knows best.  And he thrives on it,” the editorial added.

The endorsement concluded with the newspaper saying it had listed numerous reasons for voters to reelect Clifford Davis in the Democratic primary, but also that his experience would help to navigate “the uncharted difficulties” that lay ahead for the country.

The congressman had avoided appearing with his two rivals for the Democratic nomination scheduled by a local Democratic club.  Instead, the congressman was wading through “shoetop-high mud,” buying a basket of peaches and visiting with voters on a handshaking tour of the northern area of Shelby County.

John Means, a reporter for the Memphis Commercial Appeal, noted there was a particular art to the shaking of hands for politicians.  Means noted the late President John F. Kennedy and Senator Estes Kefauver had turned handshaking into a “production-line. . .”  Not so Cliff Davis.  John Means wrote Davis “spends 5 to 10 seconds with each handshake, and often uses both hands, the left resting on top of the right holds” the hand of the voter.

Rain had accompanied the congressman on much of his tour when he insisted his campaign workers make an unscheduled stop at Jones Peach Orchard on Highway 51.  Cliff Davis had shed his raincoat and straw hat earlier in the day, but his cigar was “tipped at a jaunty Rooseveltian angle” as he made his way along back roads liberally decorated with his own campaign posters and those of his opponents.

Congressman Davis moved on and was settled into a comfortable chair at Wortham’s Realty and Insurance office, where a small crowd of mostly farmers had gathered.  Davis laced his fingers together as his thumbs were in constant motion, first clockwise and then moving counter-clockwise.  Trading jokes with old friends before getting into the car to go to his next stop, Cliff Davis had been campaigning for 40 years and was good at it.

In mid-July, the Commercial Appeal reiterated its endorsements of the candidacies of Congressman Cliff Davis and Governor Frank Clement, who was contesting the Democratic nomination for the U. S. Senate with Congressman Ross Bass for the balance of the late Estes Kefauver’s term.  The Commercial Appeal added to its list of endorsements Senator Albert Gore who was seeking a third term.

As the contest inside the Democratic primary began to wind down, George Grider hammered home his contention that Congressman Cliff Davis had “lost touch” with the people of his district.  “One of the chief reasons Memphis and the Mid-South have lagged industrially is that we have a congressman who has lost touch with the economic needs of our community.”  While Grider campaigned in Shelby County, Davis had flown back to Washington, D.C. where his help was needed to break a filibuster in the House Public Works Committee.

Returning from Washington, D.C. at 8 p.m. on July 29, Cliff Davis looked tired and was shocked when about 60 young people dashed across the airport runway to greet him.  Angus McEachran of the Commercial Appeal wrote the youngsters represented members of “Young Citizens for Cliff Davis” and the congressman was greeted by kisses from the girls while “the boys pounded him on the back.”  Davis seemed genuinely surprised by the rush of people surrounding him, stammering, “I didn’t expect anyone.  This is such a surprise.”

Davis had been working hard to get President Johnson’s Appalachian poverty bill reported out of committee.  “I think it will be reported out tomorrow but my colleagues insisted I come on home because the hardest is done,” Davis told Angus McEachran.  The congressman had also been in Washington to vote for an increase in Social Security benefits.  The measure passed 388 to 8 and while his vote was not needed, Cliff Davis certainly wanted to be on hand to have his vote in favor recorded.

Cliff Davis had good reason to be weary.  The GOP members of the House Public Works Committee had been giving the chairman a very difficult time indeed.  Davis lamented some members of the committee had been “playing politics with the misfortunes of millions of people.”  Despite his best efforts, Davis’ first attempt to steer the bill out of the subcommittee he chaired had failed.  It did little to add to his luster as an influential Member of Congress.

With only days before the election, Davis began the next morning by recording a television appearance on WMCT-TV.  At lunch, the congressman spoke to a luncheon meeting of the Junior Chamber of Commerce at the Chisca Plaza Hotel.  Once the largest hotel in Memphis, the hostelry was a bit worn at the edges but still boasted a patina of what had once been.  From the luncheon, the congressman hurried to the Frank C. Pidgeon Industrial Park where he gave the primary speech for the groundbreaking ceremony.  That evening at 8 p.m. he spoke at the home of Mr. and Mrs. W.B. Smith.  It was a full day of campaigning for a sixty-six-year-old incumbent.

With two opponents in the Democratic primary, most observers thought Cliff Davis would overcome the divided opposition, but there was a serious Republican candidate waiting to face the longtime congressman in the general election.  It was the race of Cliff Davis’ long political career and there was a very real prospect he could lose.