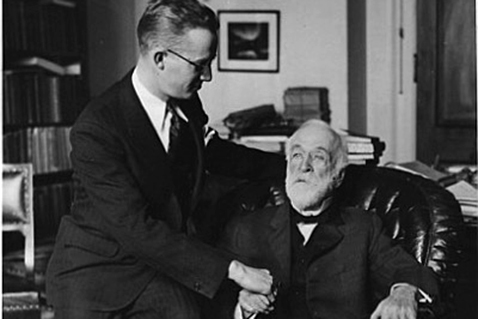 Charles Manly Stedman had announced he would not run again to represent his people in Congress in 1930. The eighty-nine-year-old congressman had served for the past twenty years. According to the Raleigh News & Observer, Stedman had repeatedly “signified a wish to spend his days under his vine and fig tree” but the people of North Carolina’s Fifth Congressional District “would not hear of it.” Charles M. Stedman was the last veteran of America’s bloody Civil War to sit in Congress.

A few months earlier, Senator Francis Warren of Wyoming and Stedman were the last two men to serve in the halls of Congress who had served in the Civil War. Warren had been a Union soldier, while Stedman had been a Confederate. Indeed, Stedman had been a staff officer for General Robert E. Lee and sixty years later was still known as “Major.” After Senator Warren’s death in November of 1929, Major Stedman remained the only person in Congress to have served in America’s bloodiest conflict. Charles M. Stedman and Francis Warren had been good friends. Each had a jocular greeting for the other whenever they met; Stedman addressed Senator Warren as “Yank,” while the Wyoming lawmaker replied by calling the Major “Johnny Reb.” One reporter recalled when told of Senator Warren’s passing, Congressman Stedman was “visibly affected” by the news.

A kind man, tall with a snow-white full beard, Stedman was a favorite amongst his colleagues and folks on Capitol Hill due to his courtly manners and gentle demeanor. Congressman Stedman was known for daily dispensing “old-fashioned courtesy” to every person he encountered. One of the last photographs widely published of the veteran congressman was as the “Daddy of the House” along with the “Baby of the House.” Congressman Stedman was pictured sitting in a comfortable leather chair grasping the hand of his youngest colleague, twenty-six-year-old Republican congressman Fred A. Hartley Jr. of New Jersey.

Charles Manly Stedman was well aware time stood still for no person and he had announced his retirement from Congress in January of 1930 after celebrating his eighty-ninth birthday. The announcement was made by Stedman’s fellow North Carolina congressman, Robert Doughton, who paid ample tribute to the retiring member on the floor of the House. Even at his advanced age, a reporter from the New York World wrote Stedman still “stands erect and has a soldierly bearing.” Charles Manly Stedman could have likely served as a prototype of the stereotypical “Southern gentleman” as he was said to belong “to the old school” with his “scholarly, mannerly, and chivalrous” demeanor.

It was something of an annual occasion for members of both political parties, Republicans and Democrats, to rise on the floor of the House of Representatives and offer a few words of congratulation and praise to the Major upon his birthday. Bob Doughton, who would go on to wield real influence in the House as the chairman of the powerful House Ways and Means Committee, was renowned for his stubborn nature, earning him the nickname of “Muley.” Doughton stood on the floor of the House of Representatives as members paid tribute to Major Stedman and made the announcement of Stedman’s impending retirement.

“Major Stedman feels,” Doughton said, “and those nearest and dearest to him, feel that he is entitled to a much needed rest.”

Irrespective of what was written elsewhere, the Asheville Citizen-Times grudgingly acknowledged Congressman Stedman was “slightly stooped” of shoulder. The Major still smoked two cigars daily and told reporters he felt fine, although he readily acknowledged he was no longer as “spry” as he once was. Stedman’s personal popularity was such, according to “Muley” Doughton that they kept insisting the elderly congressman keep running for reelection. In fact, Doughton said so “determined were his constituents and the country that he continue his work here, that he had to make three separate and emphatic statements that he would not again be a candidate before his decision would be accepted and before anyone in his district would become a candidate to succeed him.”

It can hardly be surprising the truth was somewhat different than the picture being painted by colleagues who were friends of the Major and an accommodating press. The old gentleman was failing. It is very rare, but there are those lucky people who have worn their age very lightly, but all too often diminished eyesight, hearing, and the numerous failings caused by advanced age afflict most of us. In September, it was announced Charles Manly Stedman had suffered a stroke. The congressman went to the Mount Alto Hospital for veterans in Grove Park in Washington, D.C. The Major’s only child, Katherine Stedman Palmer, was by his side. Mrs. Palmer had come to Washington the previous year to look after her father. Mrs. Stedman, the congressman’s wife, had died a decade before.

The background of Charles Manly Stedman was about what one would have expected of such a man. Born in Pittsboro, North Carolina, in Chatham County, Stedman spent his formative years in several cities in North Carolina including Wilmington, Asheville, Fayetteville and Greensboro. He entered the University of North Carolina at the age of 16 and graduated at 20. The young Charles Stedman was a gifted student, winning a “first distinction” in every course he took and graduated with the highest honors.

Stedman had just been handed his college diploma when he immediately volunteered as a private in the Fayetteville Independent Light Infantry company. Sometime later, Charles M. Stedman joined a Chatham County company and was elected as their lieutenant. He was promoted, first to captain and finally, major. Stedman served with General Lee and was wounded three times during the fighting. Charles Manly Stedman was with Robert E. Lee when the general surrendered at Appomattox.

Politics came naturally to Major Stedman. His father, Nathan, had served in North Carolina’s state legislature and as comptroller. Charles Stedman’s own first foray into elective politics was in 1880 when he was elected as a delegate to the Democratic National Convention that year.

Charles M. Stedman began his career in politics when he was elected to serve as North Carolina Lieutenant Governor in 1884. Presiding over the North Carolina State Senate, Stedman won a reputation for fairness to all and always maintained his dignity.

Stedman ran for governor four years later but lost the Democratic nomination. Major Stedman practiced law in Asheville and Greensboro and served as a trustee of the University of North Carolina. As an attorney, Charles Stedman enjoyed a very successful practice and had a large clientele. Elected president of the North Carolina Bar Association in 1900, Stedman again sought the gubernatorial nomination of his party in 1904 but was defeated. Yet even in defeat, Charles Manly Stedman managed to win new friends and admirers, always running without any hint of bitterness for his opponents, and actively supporting the winners in the general election.

Stedman became the president of the North Carolina Railroad in 1909 and when an opportunity presented itself, the Major ran for Congress in 1910. At the time of his election, Charles Manly Stedman was sixty-nine years old. Doubtless, an entire generation of aspiring would-be congressmen waited anxiously for the aging congressman to either die in office or retire. Stedman kept them waiting for the next twenty years.

Every mortal’s last fight is ultimately futile, as Death comes for all of us. Major Stedman lay in the Mount Alto Hospital gravely ill and doctors began acknowledging the old soldier might be losing his last battle. On September 23, 1930, the eighty-nine-year-old Charles Manly Stedman quietly breathed his last and slipped away.

Josephus Daniels, owner and publisher of the Raleigh News and Observer, was certainly no stranger to government or politics, having served as Secretary of the Navy during the administration of President Woodrow Wilson. The newspaper publisher became friends with Franklin D. Roosevelt as the latter served as an assistant secretary during Daniels’ time in office., President Roosevelt would appoint Josephus Daniels to serve as ambassador to Mexico during his own administration. Daniels published an editorial entitled, “Last of the Romans” eulogizing the fallen Charles Manly Stedman. Daniels acknowledged the simple fact most of the states in the former Confederacy had been represented in Congress by those who had fought in the Civil War. Josephus Daniels thought one word summed up the essence of Major Charles M. Stedman: “Chivalric.” “Handsome in person, straight as an Indian, the soul of courtesy, Major Stedman worthily represented the best of a day that is gone,” Daniels wrote in the editorial. The publisher acknowledged Charles Stedman had “touched life at all points.” The late congressman had known “prosperity and adversity, victory and defeat.” Nor was Charles Stedman “unduly elated by one or cast down by the way,” Daniels insisted. “He was the master of his fate.”

Daniels reminded his readers of the late congressman’s fairness as the presiding officer of the North Carolina State Senate while Stedman had been Lieutenant Governor. Josephus Daniels wrote Stedman was “reputed to be the best presiding officer of a century.” Daniels noted Stedman’s service in the House of Representatives had been excellent “until failing health impaired his powers.” “Even then his district honored itself by re-electing him,” Josephus Daniels wrote. Daniels remembered Charles M. Stedman as “upright, patriotic and distinguished.” The editorial concluded with Daniels writing, “The State, sorrowing in its loss, is proud to have borne him and been honored by his career.”

The prosperity and adversity referred to in the editorial by Josephus Daniels were acknowledged by a former law partner of Stedman’s, A. Wayland Cooke, who recalled the Major had been a man of considerable wealth at one time. Stedman had faced “severe reverses” which caused “his entire estate to be consumed” in paying down his accumulated debts. Cooke remembered paying off his remaining debt became something of a “passion” with the Major. Stedman paid every last penny owed to every creditor.

Victory and defeat applied to Charles Stedman not only in times of war but also in his political life. Aside from having twice lost the Democratic nomination for governor, Charles M. Stedman had run for Congress three times from the district surrounding Wilmington, North Carolina. Called the “Shoestring district” because of its unusual configuration, contests between Colonel Alfred Moore Waddell “took on many of the aspects of the War of the Roses.” When Charles M. Stedman became a candidate for Congress from the Fifth District in 1910, Congressman Alfred M. Waddell sent a highly flattering letter to his former opponent, along with a personal check as a campaign contribution.

When Stedman became a candidate for Congress from North Carolina’s Fifth District in 1910, the Democratic nomination was decided by a convention rather than a primary election. Stedman was apparently the last candidate to announce he was running, yet he emerged with a plurality of votes after the convention became deadlocked for several days. Nominated and elected to Congress, Charles M. Stedman remained there for the rest of his life.

Wayland Cooke recalled the Major was not a man to harbor malice, although throughout his life there had been numerous occasions where Stedman certainly had good reason to feel “aggrieved” by the “uncalled for assaults of the misinformed, the misguided and sometimes even the vicious. . .” Cooke wrote that while Charles M. Stedman surely had known and experienced adversity, his spirit never knew defeat. His defeats for political office, and his losing literally all of his material possessions and personal wealth, caused Major Stedman no bitterness. Charles Manly Stedman arose from every personal challenge stronger than before.

Adversity reaches out its claws to grab hold of every life. Perhaps how we react and respond to those challenges and travails says more than we would care to admit about our determination and character. By any standard, Charles M. Stedman met the challenges of his own time and managed to devote his life to serving others.