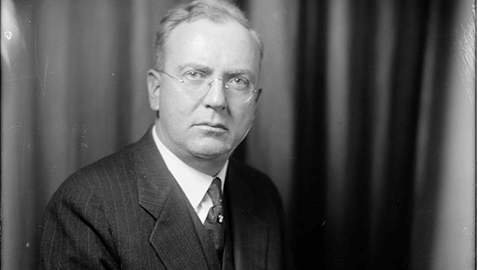 One of the responsibilities of the United States Senate as set out in the Constitution is that of advising and consenting to nominations made by the Executive Branch of the federal government. Between 1894 and 1968 – – – a span of seventy-four years – – – the United States Senate rejected only one presidential nomination to the U.S. Supreme Court. Tennessee’s senior United States senator, Kenneth D. McKellar, had an important role to play in the Senate’s rejection of the nomination of Judge John J. Parker to the nation’s highest court.

There were two vacancies to fill on the Supreme Court in 1930, the first caused by the resignation of Chief Justice William Howard Taft. To this day, Taft remains the only former President of the United States to have served on the Supreme Court. Taft had been in failing health and resigned as Chief Justice on February 3, 1930. That same day President Herbert Hoover nominated Charles Evans Hughes to serve as Chief Justice. A former governor of New York, Hughes had been an Associate Justice of the Supreme Court in 1916 when he resigned to accept the Republican nomination for president to challenge incumbent Woodrow Wilson. Hughes went to bed the night of the election believing he was the President-elect, but as the votes came in from California, he only narrowly lost to Wilson. One newsman called for Hughes that evening and the phone was answered by an aide who coldly said the “president-elect” was asleep and could not be disturbed. The reporter snapped, “Well, tell him when he wakes up, he’s not president any longer” and hung up.

A man of Olympian appearance, Charles Evans Hughes had served as secretary of state during the administration of Warren G. Harding and into that of Calvin Coolidge before resigning to return to a quite lucrative law practice in New York.

Progressive Republicans were especially unhappy with the Hughes nomination. Some fretted that he had resigned from the court to accept a nomination by a political party for office, albeit the presidency of the United States. Others, including populist Democrats, largely Southern Democrats, disliked the fact Hughes had earned a large income by representing corporations and corporate clients. The sixty-seven-year-old Hughes was the oldest man to be nominated to serve as chief justice of the U.S. Supreme Court. The Senate, following debate, played its role of “advise and consent” and the nomination of Charles Evans Hughes passed the Senate 52 – 26.

Edward Terry Sanford died unexpectedly on March 8, 1930, after a visit to his dentist. Sanford, from Knoxville, Tennessee, had been nominated to serve on the Supreme Court by the late President Warren G. Harding. Although a Democrat, and a highly partisan one at that, Senator Kenneth McKellar had much to do with Sanford’s nomination to the Supreme Court during a GOP administration and a Republican-dominated Congress.

President Herbert Hoover announced on March 21, 1930, he had nominated John J. Parker to fill the vacancy caused by Justice Sanford’s death. Hoover had served as secretary of commerce during the administrations of Warren G. Harding and Calvin Coolidge and had been considered a sort of political wunderkind when he first ran for the Republican nomination for president in 1928. Hoover was so popular he had been lauded for the presidential nomination of both the Democratic and Republican parties; in fact, Franklin D. Roosevelt had advocated the nomination of Herbert Hoover for the Democratic nomination for president in 1920. Hoover swept past the political bosses to clinch the GOP nomination and won the 1928 presidential election in a landslide over New York governor Alfred E. Smith. Smith was the first person of the Catholic faith ever to head the ticket of one of the country’s major political parties and it was a disaster. The Protestant South, which was normally the most reliably Democratic region in the country, rebelled. Suddenly, Southern Democrats had to scramble and actually campaign to keep their states in the Democratic column in the 1928 general election. Herbert Hoover carried several normally Democratic states, including Florida, Texas, North Carolina, Virginia, and Tennessee. Al Smith, a political “wet,” meaning he did not support the national prohibition of liquor prevalent at the time, carried only six states in the 1928 presidential election: Arkansas, Louisiana, Mississippi, Alabama, Georgia, and South Carolina. Herbert Hoover carried everything else. Neither Virginia nor North Carolina had voted for a Republican since 1872; Texas had never before voted for a Republican presidential candidate. No less than 215 counties that had never before supported a Republican presidential candidate voted for Herbert Hoover. Still, Al Smith had polled more votes than any previous Democratic presidential candidate in 30 of the 48 states (Alaska and Hawaii were not states at the time); Tennessee was one of four states (the others were Oklahoma, New Mexico and Texas) where Smith ran behind the vote won by John W. Davis, the Democratic nominee for president in 1924. Al Smith won just over 40% of the ballots cast, while Herbert Hoover won over 58% of the vote.

Democrats had difficulty in holding some of the most rabidly Democratic states in the old Confederacy; Hoover tallied 120,725 votes in Alabama to 127,797 for Smith.

Alabama U. S. Senator Tom Heflin had bolted the party to campaign against Smith and “the Pope of Rome.” Likewise, Senator Furnifold Simmons, the Democratic boss of North Carolina, refused to support Smith’s presidential candidacy and saw the Tar Heel State carried by Herbert Hoover with 55% of the vote.

It was a devastating defeat for the Democrats and Hoover followed Calvin Coolidge into the White House on a wave of Republican prosperity. That prosperity evaporated in October of 1929 when the stock market crashed. The “chicken in every pot” and “Model T in every garage” carried the ring of a cruel mockery. By 1930, President Hoover’s political clout was diminishing as the suffering inflicted by the Great Depression became more acute. Hoover’s nomination of John Johnston Parker seemed likely to be approved by the full Senate, but there were immediately rumblings of discontent as opposition began to bubble to the surface.

John J. Parker was a judge of the U. S. Circuit Court of Appeals for the Fourth Circuit. Parker was a Southerner, having been born in North Carolina, which was a political calculation made by President Hoover, who thought Southern Democrats inside the U.S. Senate would have difficulty in opposing the nomination of a Southern judge. Parker was no political novice as he had carried the GOP banner in a 1910 race for Congress, had been his party’s nominee for state attorney general in 1916, and for governor in 1920. President Calvin Coolidge had appointed Parker to the Fourth Circuit Court of Appeals in 1925. John J. Parker had been confirmed by the United States Senate on December 14, 1925.

Parker’s nomination to the Supreme Court was immediately opposed by organized labor due to an opinion he had written in a case involving the United Mine Workers, which was considered to be highly anti-labor by unions. The American Federation of Labor and the CIO instantly mobilized to oppose Parker’s nomination. The NAACP also issued a blast against Parker’s nomination to the Supreme Court because of a statement he had made during his 1920 campaign for governor. Responding to an accusation made by a Democratic opponent who asserted Parker, if elected, would urge participation in the political process by black citizens, Parker replied, “The participation of the Negro in politics is a source of evil and danger to both races and is not desired by the wise men in either race or the Republican Party of North Carolina.” That comment ignited a flame that ultimately would doom John J. Parker’s nomination to the U.S. Supreme Court.

When John J. Parker was nominated for the Supreme Court, Tennessee was represented in the United States Senate by Kenneth D. McKellar and William E. Brock. McKellar was the first person ever to be elected by the people of Tennessee to serve in the Senate, winning election in 1916. Brock, a wealthy candy manufacturer, businessman and philanthropist from Chattanooga, had been appointed to the U. S. Senate in 1929 by Tennessee governor Henry Horton following the death of Senator Lawrence D. Tyson. Senator McKellar was no admirer of President Herbert Hoover; quite to the contrary, the peppery McKellar was one of the more vocal members of the Senate in his criticisms of the Chief Executive. As the president nominated John J. Parker for the Supreme Court, McKellar was denouncing Hoover on the Senate floor over the tariff, which Hoover had asked for “limited” revisions. McKellar growled the president was “absolutely responsible and has been for a long time for the muddled condition of the present tariff bill.” Senator McKellar said, “The president has stood by in silence, without the vision, leadership or courage to direct the Republicans in Congress to do what he advised them to do.” The Detroit Free Press in an editorial opinion sniffed, “Senator McKellar is a Democrat, who has never given any striking evidence of a willingness to place country above party; and for that reason, his implied regret that Mr. Hoover has not seen fit to ‘direct’ the Republicans in Congress to override the Democratic opposition to the present tariff bill seems to border on insincerity.” The Free Press wondered why McKellar did not use his influence inside the Senate to promote Hoover’s stated intent with regard to the tariff, wisely choosing to ignore the reality the Senate was controlled by its Republican majority.

It was hardly unusual for K.D. McKellar to issue a blistering statement on any issue involving President Herbert Hoover. Yet McKellar commanded the attention of his colleagues and the national press when he announced on the floor of the Senate his office had been entered on the previous Saturday night and “his desks and files ransacked.” “Of course, I do not know what was wanted,” McKellar said, “but probably some secret service agents or somebody else desired to get something for their benefit and to my detriment.” Senator McKellar told his colleagues any person, especially whoever had illegally entered his Senate office and wanted to “find out something about my office, instead of coming in the night time, to come in the day time, get my consent and go through all the files and desks regardless.”

Senator Reed Smoot of Utah acknowledged his office had also been entered and two new pens had gone missing. Senator William E. Brock also said his office had been “disturbed.” Senator Brock said a “desk pad and a couple of pens” were taken from his office. Smoot was quick to say he never believed secret service agents were responsible for looting his office. McKellar did say while nothing had apparently gone missing from his Senate office, his “files and records” were left in considerable disorder. McKellar darkly reminded his colleagues “this is not the first time such an incident has occurred,” saying he recalled the office of Senator Thaddeus Caraway of Arkansas had been broken into “some time ago.”

McKellar’s announcement came a few days before the final vote on the nomination of John J. Parker to serve on the U.S. Supreme Court. Opposition to the Parker nomination in Tennessee had commenced almost immediately. The Chattanooga Daily Times reported senators McKellar and Brock had received a telegram from Local Number 89 of the International Typographical Union protesting against Judge Parker’s nomination.

As the United States Senate considered the nomination of Judge John J. Parker to sit on the Supreme Court, the matter went first to a subcommittee of the Senate’s Judiciary Committee headed by Senator George W. Norris of Nebraska, a progressive Republican who had bolted his own party to endorse the candidacy of Governor Al Smith. The fight over Judge Parker’s nomination would be hard-fought, bitterly contested and close.