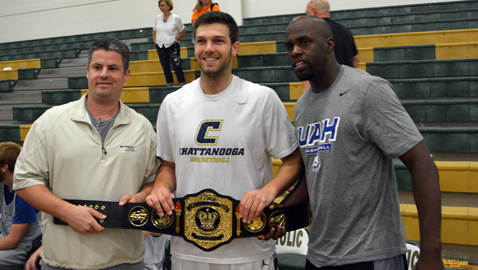 Brent Watts said that he’d have a new favorite college football team when the 2015-16 season tips off in November.

Watts, a veteran coach in the summer hoops league, certainly has good reason to begin cheering for King. Three of the team’s players carried the coach and his summer squad to its second consecutive championship.

Drew Standifer, and Hunter Leveau combined to score 65 points and Calvin Walker made some significant contributions in a game that Campus Lights won handily. Furthermore, the final score didn’t tell the whole story. Campus Lights led 65-49 at halftime and led by as many as 25 points at one point.

“My kids are really smart and they play well together,” Watts said. “I had Hunter [who scored a game-high 44 points], Walker and Drew Standifer [who finished with 19 points].

“Then, I got to coach Sam Watson and he’s a Farragut guy. And then I had [former Austin-East standout and Tennessee player] Brandon Lopez and [former Old Dominion star] Jonathan Adams and those guys are class acts.”

Watts, like Watson played his high school ball with the Admirals. Lopez, who missed his senior season with the Volunteers due to a knee injury, scored 18 points while Adams had 30.

For Lopez, the win was a big one.

“It always feels good to win,” he said. “I missed my senior season with a torn ACL.

“But things happen for a reason. I’m through with basketball and I’m going to graduate school.”

“It was good for me to hoist that [wrestling] belt [which is awarded to the league champions] because I played for it and lost two years ago,” Walker said.

Campus Lights, which finished with a 5-1 record, was in control from the outset thanks to some early hot shooting.

“I don’t think you can shoot the ball any better than they did tonight,” Tillman coach Rick Campbell said. “They had those three King College guys who are familiar with each other on the court and that showed tonight.

Tillman (4-2) got 37 points from Robert Hubbs and 32 from Fulton alum Jalen Steele (who now plays at Lincoln Memorial University after a previous stop at Mississippi State).

Josh Murray (Carson-Newman) had 11 points for the league runner-up.