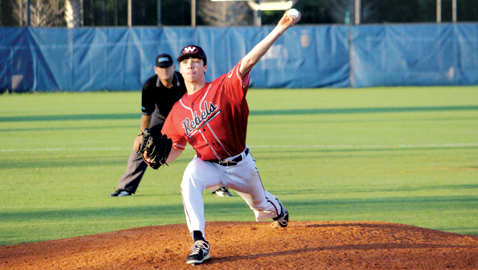 “We’re traveling on a charter bus. That really helps with the team-building part of it.”

It’s a 700-mile trip from the Rebels’ home field on Sutherland Avenue to St. Pete.

“We got rained out Monday, lost Tuesday (to Northside Christian) 6-5 in the bottom of the seventh and Wednesday one of the best teams in this part of the state (Out-of-Door Academy) beat us 12-4,” summarized McNish, who is in his third season as the Rebels’ skipper, after coaching many years at Lenoir City.

The Rebels lost at Shorecrest 6-5 Thursday and were scheduled to return home Friday.

Except for Monday’s rainout, the weather was “in the mid to upper 70s and sunny,” said McNish.

“You get five or six days of nothing but baseball, and it’s beneficial to be getting to play in good weather early in the season.

“All the schools and coaches down here have been very accommodating.”

The West team was planning on taking in a major league spring training game between the Twins and Orioles in nearby Sarasota Monday night, but about the time the team was preparing to leave for the game, they found out it had been canceled.

“Instead we ate dinner on the beach, at The Beach House in Bradenton,” said McNish. “That was pretty cool.”

West was 1-2 in the opening week of regular season play before making the trip to the Sunshine State. The Rebels are now 1-5. Four of their five losses have been by a total of six runs.

“We gave up eight runs in three games and ended up being the No. 3 seed out of 24 teams,” reported Nick Jacobs, S-D assistant coach. “We’re basically playing a championship game in our side of the bracket.. We were the only out-of-state team left.”

The Cherokees capped a perfect week with a 3-2 win over the West Florida High Jaguars Thursday at West Florida University, pulling out the victory on a walk off hit to left by junior Brett Browning, the head coach’s son, with two outs in the bottom of the seventh.

“We scored 17 runs with two outs in the four games combined,” said Jacobs. “Overall, our pitchers did well.”

Senior Riley Dyer started and pitched into the fifth inning against West Florida before senior Connor Gregory finished to log the win.

Brody Rollins, a junior left-hander, and Blake Stansberry, South-Doyle’s No. 1 pitcher and a MTSU signee, hurled complete-game wins earlier in the week.

“It was a great chance to get away and enjoy some warm weather and time out of Knoxville,” e-mailed Catholic Coach Adam Sullivan. “Goals for the week were to get some guys healthy and see some guys in different spots in the lineup. We went 2-2 on the trip, but felt we learned a lot and played some good teams.

“Beating Union, Okla. at University of West Florida was definitely one of the highlights. We came back from being down 5-0 in the first and won 9-5. Sammy Nelson did a great job and moved up into the front end of our pitching staff with that performance. Junior outfielder Mike Fitzgerald had three hits in the comeback win.”

“All in all, it was a successful week for the Irish. We learned a lot about ourselves and what it will take to be successful.

“The players stayed with their families in the same condo complex, so it also was a really good time of fellowship.”