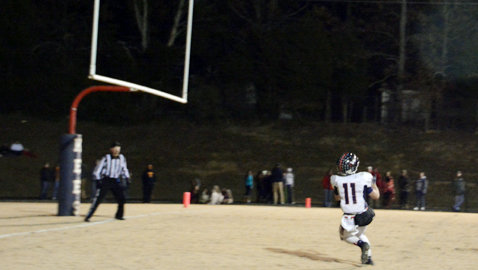 Photo by Dan Andrews.
West defensive back Tommy Pridemore (11 in white) makes an interception in the end zone that ices West’s 34-14 win over South-Doyle on Friday. The Rebels advance to play Rhea County on Friday night in the class 5A semifinals.

West will travel to Rhea County on Friday

Radio Voice of South-Doyle Cherokee football on AM 620 WRJZ

After losing by a single point to Henry County in the class 5A finals a year ago, the West High Rebels have been on a season-long mission to get back to Cookeville to try to bring home the elusive gold ball in 2014.  Head Coach Scott Cummings’ squad broke a 14 all tie with 3 touchdowns in the last 14 minutes of play on Friday to earn a quarterfinal road win over the top seed in quad 1, the Cherokees of South-Doyle.

With the win, West advances to play at Rhea County this Friday, with the winner moving on to play for the state championship on Friday, December 5.

Both West and South-Doyle came into the game ranked in the final AP Class 5A poll, with West as the top-ranked team and South-Doyle in the number 5 slot.  South-Doyle secured the top seed in the quad by virtue of an undefeated regular season and the IMAC championship.   A huge crowd and a regional TV audience were in place to see the game.

Each team squandered early scoring opportunities.  West missed a 30-yard field goal on its first possession of the game. South-Doyle turned the ball over on downs on its first offensive possession deep in Rebel territory, accounting for the entire quarter and in to the second.

The only score of the first half came at the 8:16 mark of the second quarter when West senior quarterback Seth Marshall scored on a 4 yard keeper.  Freshman kicker Caleb Norris added the point after to give the Rebels a 7-0 lead, a lead that they would take to the locker room with them at halftime.

With both teams featuring high scoring offensive attacks, the fact that there were only 7 points scored in the first half came as a surprise to just about everybody watching the game.  Cummings’ team, a playoff experienced group, didn’t get flustered about a lack of offensive production, however.

“South Doyle deserves a ton of credit,” Cummings explained.  “They came out and showed us something on defense that we hadn’t seen at all, and we were very ill prepared for.”

That “something” that the South-Doyle defense showed the Rebels was a 3-3 stack defensive alignment.  The Cherokees based all year out of a four-man front, and felt like the 3-3 look would be more successful against the quick hitting run attack of the Rebels.

“We had to make some adjustments at the half,” Cummings went on to add.  “We added a tight end and sometimes two tight ends and just tried to get some speed into the offense.  We were finally able to do that, but they made it tough for us.”

South-Doyle took the second half kickoff and finally found some offensive success against the West defense as the Cherokees drove the field, converting on a 4th and short in its own territory by mere inches to keep the drive going.  Brody Rollins scored on a 38-yard keeper at the 8:13 mark of the third, and after Logan Mathis booted the extra point, the game was tied at 7.

It didn’t take West long to regain the lead, however.  South-Doyle, opting to pooch kick in trying to keep the speedy West kick-off return guys in check, gave the Rebels a short field on its ensuing possession.  A quick 53-yard drive was culminated by Marshall’s second TD run of the night, this time from 7 yards away.  Norris’ kick was true, and West had regained the lead at the 6:29 mark of the third.

After a penalty had pushed them back inside their own 10, South-Doyle started a long drive of its own. A key play in that drive was a fake punt on 4th and long, in which the ball was snapped to the “protector,” quarterback Brody Rollins.  Rollins’ pass found the arms of fellow senior Shoan Labeoux, who went up high for the football and came down with it, withstanding a big hit to get the first down.  Then Labeoux found the end zone on a halfback pass from Joc Bruce.  Mathis’ kick knotted the score at 14 with 2:45 to go in the third.

It looked like the Cherokees had all of the momentum at that point, but that changed in the blink of an eye.

This time South-Doyle opted to kick the ball deep and try to cover the kickoff normally, but it backfired in a big way  Alex Burch, another of the  experienced Rebel senior class, fielded the kickoff at his own 10 and got a couple of key blocks and found himself in the clear down the right sideline.  Mathis was able to slow him down just enough to all for some help to get Burch on the ground, but not until he was all the way to the Cherokee 4.

That return seemed to take the wind out of the Cherokee sails as the veteran West team then seized control of the football game.  They would add two 4th quarter touchdown to seal the deal.

The first came on an electrifying 65-yard run by sophomore Christian Romines with 8:59 left, and then Cottrell bolted to the end zone from 37 yards out with 3:23 left.  Norris was good on one of the two PATs, as the Rebels wrapped up the quarterfinal win and heads into next week’s semifinal contest with a 12-1 record.

South-Doyle closed a record-setting season also at 12-1, and while obviously disappointed, Cherokee head coach and athletic director Clark Duncan was very appreciative of the unprecedented success of this group of players and coaches.

“We are just so proud,” Duncan said.  “We’re going to hurt for a while, but when it’s all said and done, we are going to look back and be proud of what we have accomplished.  We were a heck of a football team, and our kids played their hearts out.  Tonight we left a few out there, and who knows?  If we convert a few of those plays, it might have been a different ball game.  But we are playing against one of the, if not the, best team in the state, and you can’t let those opportunities slip away in these types of ball games and have a chance to win.”

Each team had 402 yards of offense in the game, but West gained those 402 yards on 20 less offensive plays, averaging over 9 yards per play.  The Cherokees had more first downs than did the Rebels – 22 to 18 – but couldn’t convert those into more points.  Each team lost a fumble, and West intercepted 2 Rollins passes on the evening.

Individually for West, Cottrell, Marshall, and Romines carried the major part of the load.

Cottrell, who is verbally committed to play football at Georgia Tech next fall, showed that he is more than just a speed back, rushing for 166 yards on 16 carries. Much of Cottrell’s yardage came after first contact.

West on the night only attempted four passes, completing two of them good for 32 yards.

Offensively for South-Doyle, most of the damage was done through the air as the Cherokees connected on 23 of its 32 pass attempts.

Lebeoux had a monster night, hauling in 12 passes for 199 yards while the University of Tennessee verbal commitment Bruce caught ten balls, good for 105.

The Rebels were led defensively by a pair of seniors – safety Max Bacon with ten tackles, and linebacker Noah Hoxie , who had nine total stops.  Tommy Pridemore and Alex Burch each had interceptions for the Rebels.

Harley Wheeler’s eight tackles led the Cherokees.  Bruce and Rollins each added 7, and Jimmy Fowler played well on the defensive front and pitched in 6 stops.

With his team’s season now in the books, Duncan is ready to get to work looking to next year, a year in which he’ll have to replace some 7 senior starters on offense and 9 on the defensive side of the ball.  And not only replace those seniors, but replace seniors such as Rollins, Bruce, Labeoux, and Malik Lundy – all who have been such a high percentage of the offensive production over the last three years.

“I can’t tell you how excited I am about the future,” Duncan told The Focus.  “We’re going to be exciting to watch next year and about the future with the football players that we’ve got on campus. We feel like that this is the start of a build of a great program.”

But while South-Doyle’s season is done, there is still work to do for West, as they have one more hurdle to get over to get back to Cookeville for a second year in a row, and that is a big hurdle on the artificial turf surface at Rhea County on Friday.

“They run that foot to foot (winged T based) offense,” Cummings said of Rhea County. “And Mark Pemberton does a great job with it and they just make it so tough on you.  Rhea County will 5 yard you to death, and they are patient enough to just go down the field on you doing it.  It’s a huge challenge for sure.”

But, as Cummings added, he is just happy his team is still alive to play another week.

“Yeah, we’re still playing – we’ll take it no matter who we are playing.”