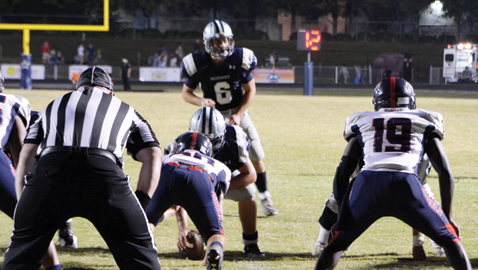 Photo by Dan Andrews.
Farragut quarterback Jacob Naumoff prepares to take a snap against West Friday night. Naumoff threw for 324 yards in his best outing of the season. It wasn’t enough as the Admirals lost a shootout to the Rebels 49-30.

The West High School football team had enough to prevail in an offensive shootout Friday night. The Rebels’ rushing attack amassed 474 yards and propelled West to a 49-30 victory at Farragut’s Bill Clabo Field.

Rebels’ quarterback Seth Marshall and running back Nathan Cottrell both proved to be double-edged weapons on their way to help the Rebels nab their first District 4-AAA victory of the 2014 season.

Marshall rushed for 164 yards and two touchdowns on 12 carries. He also threw a touchdown pass. Cottrell, meanwhile, had a pair of rushing TDs and threw for a score on a halfback pass. West coach Scott Cummings was pleased with his offensive attack.

“Seth makes so many plays with his feet,” said Cummings, who guided the Rebels to an appearance in the Class 5A State Championship Game last season. “When we’re hitting on our offense and exploding out of the backfield like we’re supposed to be, it makes things tough on defenses, and Nathan did that.”

The longtime Rebels’ coach’s assessment of his team’s defense was less kind after West (3-1 overall, 1-1 in District 4-AAA) allowed the Admirals to gain 516 yards on offense.

“We’ve got to play much, much better defense,” Cummings said. “It’s a major concern.

“Our defense has been the leader of our team for years. Our defense didn’t show up at all tonight. That’s not to take anything away from Farragut. They did a great job scheming us.”

“Our offense grew up tonight,” he said. “We’ve got some confidence going into a bye week.”

The Rebels scored the first 13 points of the contest. West took the opening kickoff and marched 81 yards on eight plays. The game’s opening drive was culminated when Marshall connected with Alex Burch on a 24-yard scoring strike. Joe Hanna’s extra point gave the visitors a 7-0 lead with 10 minutes, 7 seconds remaining in the first quarter.

Farragut (1-4, 1-1) would respond by scoring the next two touchdowns. The Admirals, who had their first drive thwarted when Max Bacon intercepted a pass from FHS quarterback Jacob Naumoff, pulled to within 13-7 Tanner Thomas scored on a 1-yard plunge at the 2:06 mark of the opening frame.

Farragut would take the lead with 58.5 seconds to go when Naumoff hit Derek Williams with a 22-yard scoring strike after a West fumble that was recovered by Farragut’s Davis Simmons.

The Rebels then went to the ground to score the game’s next 21 points. Cottrell made the score 19-14 on his first scoring run. West made the two-point conversion to give the Rebels a 21-14 lead early in the second stanza. From there, West would never trail again.

Christian Romines had a 29 yard run before Marshall’s 70-yard scoring scamper made it 28-14 with 7:23 left in the first half.

Cottrell made the score 35-14 with a 5-yard run midway through the frame.

The Admirals, who played without seven starters due to injuries or suspensions, pulled to within 35-17 on a 26-yard field goal by Carter Phillipy just before halftime.

Farragut trimmed West’s advantage to 35-24 when Thomas scored on a 7-yard run on the Admirals’ first possession of the second half.

Farragut then successfully executed an on-sides kick and got the ball Rebels’ 49-yard line but a controversial fumble ended that threat before Marshall’s 1-yard run made it 42-24 with 1:43 to go in the third stanza.

Thomas, who rushed for 170 yards on a career-high 37 carries, had Farragut’s final touchdown early in the fourth quarter to make the score 42-30. The ensuing two-point conversion failed.

Cottrell’s 51-yard scamper closed the scoring with 9:17 left in the game.