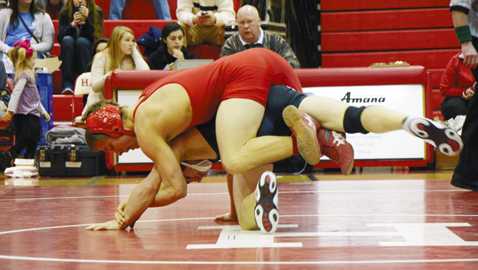 Halls High’s Joe Fox takes the upper hand against Bearden’s David Garabrandt in the 138-pound bout of the Region 2-AAA Championship match Thursday at Halls. Fox won a 6-5 thriller and the Red Devils went on to win a second straight title with a 40-30 win over the Bulldogs. Photo by Dan Andrews.

It was a time for a repeat wrestling champion Thursday night as Halls High School claimed its second consecutive Region 2-AAA Dual Championship.

The Red Devils (24-1 in dual meets) successfully defended their 2012-13 title with a 40-30 victory over Bearden before a boisterous crowd at Halls.

The win over the Bulldogs put Halls into the State Duals for the second consecutive year and for the third time during Shannon Sayne’s tenure as head coach.

Bearden (28-6) also makes its second straight trip to the State Duals in Franklin on Jan. 31 and Feb. 1.

Halls might’ve repeated as region champion but the Red Devils achieved a first in program history.

“As far as I know, this is the first time that we’ve been back-to-back region champions,” Sayne said. “Our kids wanted this and they really wrestled well.”

Halls 136-pounder Joe Fox set the tone for the championship dual in the first match when he earned a 6-5 decision over the Bulldogs’ David Garabrandt. The match was tied 2-2 at the end of the first period and Garabrandt led 5-4 heading to the final two minutes. Fox scored the only two points of the third round.

“That first bout really went down to the wire and it could’ve gone either way,” Bulldogs’ coach Donnie Floyd said. “If the hips were a little more in the other direction it could’ve turned out differently.”

The Red Devils won the next two matches as Andrew Kitts (145 pounds) scored a pin over Shaun Gambino in 1 minute, 7 seconds. In the 152-pound weight class, Colton McMahan won 8-3 decision over Bearden’s Jacob Gerken to give the Red Devils a 12-0 lead.

Bearden got on the board when Luis De La Cruz (160) pinned Halls’ Sirrel Robinson at 2:25. Robinson had a 4-1 lead after the first period before losing by fall early in the second round. That win made the score 12-6.

At 170, Halls picked up a major decision when Tyler Kalish downed Casey Cain 13-3. That extended the Red Devils’ advantage to 16-6.

The Red Devils then nabbed a pair of wins via forfeit. Brandon Williams (182) and Tanner Huff (195) each scored six team points without taking the map.

The Bulldogs pulled to within 28-12 when Tristan Majors, a top 220-pound wrestler, won by forfeit.

Bearden heavyweight Musab Henderson pulled the Bulldogs to within 28-18 when he scored a pin over Jacob Woods at the 1:15 mark of the bout.

At 120, Bearden’s Zach Patterson defeated Calvin Giles 4-1. In the 126-pound division Bearden’s Jeremiah Garabrandt won by fall and in the 132-pound weight class, Ben Kaemmerer won a 2-0 over the Red Devils’ Trey Lepper.

Floyd said the match was tight.

“Halls did awesome and my guys did awesome,” Floyd said. “It all just came down to who won the close matches and Halls won more of those than we did.”

Bearden, the District 4-AAA Champion, advanced to the championship match and to the Midstate with a 51-25 win over District 3 runner-up Gibbs in the semifinals.

The Red Devils, who won the District 3-AAA Championship, advanced with a 58-21 victory over Hardin Valley Academy.

“Our guys came in ready to wrestle tonight,” Sayne said.