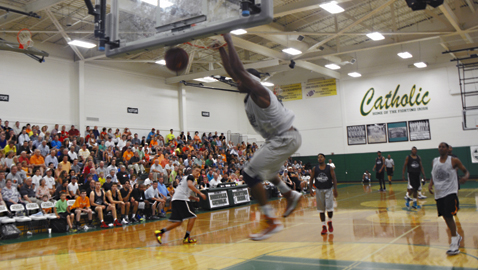 PHOTO BY DAN ANDREWS.
Michael Blue, playing for Rice Buick GMC, soars for a stuff to give his team a 9-point lead in the first half of the Pilot Rocky Top Basketball League’s championship game Wednesday night, July 2, at Knoxville Catholic High School. Campus Lights battled back and pulled out a 131-130 win.

As sequels go, Rocky VII was the best yet.

Richardson, who will be the lone returning starter for Tennessee in 2014-15, was fouled by former UT point guard Bobby Maze before the ball was thrown into play from side front court for a last-second attempt. When the whistled sounded, Josh was tumbling to the floor.

“Bobby tackled him,” said Brent Watts, who notched his first Rocky Top title in seven tries as a coach. “Bobby had two hands on his hips, and just tackled him. Eventually, if you force too much contact, they’ve got to make a call.”

“We designed a play real quick to try and get Josh open or try and get Montre (Edwards) on a roll, and luckily, we got the foul,” said Jon Higgins, Rocky Top League veteran and former UT sharpshooter who now is head coach at Knoxville Central High.

“I’m getting a little too old for this man, but … that’s four in a row for me, so I feel real good.”

Rocky Top League Commissioner Andre Whitehead, who filled in as head coach for Rice Buick GMC due to Dr. Chad Smith being on vacation, said “It was probably the most competitive championship game we’ve had in the entire seven years. It just makes sense, because this year I think the league has been more competitive than it ever has.

“Yeah, it was a good game and a good show for a packed house.”

It was the third year Whitehead has subbed for a head coach in the finals. He’s now 2-1 in that role.

Detrick Mostello, one of new UT Coach Donnie Tyndall’s recruits, gunned in a game-high 48 points for Rice Buick GMC. He swished in 6 of 11 long-range 3-point shots and was 12 of 14 at the line.

Maze chipped in 28 points but misfired on all six of his 3-point attempts. Michael Blue added 16.

Rice led by as many as 12 points in the first half. But Campus Lights rallied and Richardson, fouled on a 3-point shot, converted the three free throws with no time left on the clock to give his team a 62-59 halftime lead.

A flurry of three 3-point baskets by Wilson, a former Carter High standout, and a slam by Richardson put Campus Lights up by seven (129-122) with 2:05 left. A big 3-point shot by Devin Schmidt (Delta State) and three free throws by Mostello put Rice back in it.

Battling for the title brought out the competitive juices.

“Everybody’s goal is always winning,” said Watts, with a $2500 World Wrestling Federation championship belt draped over his shoulder. “If you step out on the court to compete, you want to win. You could see the effort. This was a great game. These guys played hard.”

Watts, former Farragut High and Maryville College player, said he borrows the WWF belt from a friend’s business each year and brings it to the Rocky Top finals.

“I bring it because Andre and the guys are big wrestling fans.”

This was the first time though Watts got to let his team show it off as champions. His perfect ending to Rocky VII.