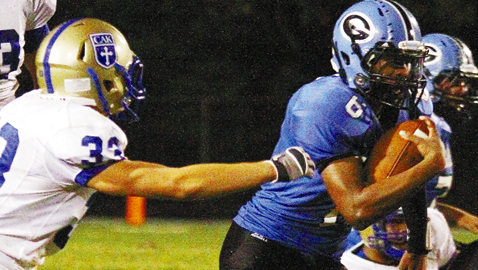 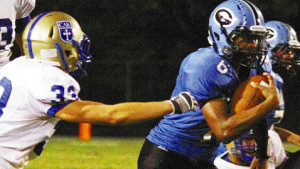 Photo by James Spears. Gibbs quarterback Jay Cade eludes Christian Academy of Knoxville’s Russell August in the Warriors 42-33 road win over the Eagles on September 21. Cade rushed for 323 yards and five touchdowns for Gibbs in that game, but was limited to minus-7 yards and nine rushes against Fulton Friday night.

Rollins averaged 17.4 yards on 20 carries. His 75-yard touchdown run in the first half was the play of the game and a Gibbs momentum killer. Rollins’ run came after the Eagles had kicked a 40-yard field to cut the Falcons’ first quarter lead to 13-3.

The keys to the game for Fulton were their physical offensive and defensive lines. Fulton rushed for 436 yards on the night with the offensive line pushing Gibbs defenders off the line of scrimmage. Fulton’s defense held the Eagles to 148 yards and only three yards per play.

The Falcon defense kept getting penetration in Gibbs’ backfield and limiting their offensive production. The Falcons’ defense held the Eagles to four straight three-and-outs in the first half. “If we could get em three and out, we’d try to hit some home runs and get some momentum,” Head Coach Rob Black said. “Good job executing that,” he added.

For their next score, Fulton started with possession deep in their own territory. Xavier Hawkins picked up a big first down on a 20-yard catch; Gibbs was penalized for an unsportsmanlike hit to the head on the play, which added another 15 yards to the catch. The penalty gave Fulton a first-and-goal at the 7-yard line. Three plays later, Hawkins faked a run then flicked a touchdown pass to Dean Taylor. Fulton led 13-0 with 3:20 left in the first quarter.

Gibbs first’ first down of the night came on a penalty. They gained their second first down on a 12-yard carry by Silas Joiner. Their possession ended with a 40-yard field goal and had a chance to build on their new-found momentum.

It was not to be. Rollins took a pitch, cut back across the field, and outran the Eagles to the end zone for a 75-yard touchdown. The one-play drive put Fulton up 20-3 at halftime.

The Falcons jumped out quickly in the second half, scoring in three plays on a two-yard Campbell run on their opening possession. Barely three minutes later, Rollins scampered to the end zone for a 68-yard run and his third touchdown. That gave the Falcons a 34-3 lead.

Gibbs scored their only touchdown of the night on a fourth-and-eight pass that went 39 yards. Backup quarterback Seth Kennard found Brendan Wilson for the score.

However, Fulton’s defense as they had all night, put the clamps on any Eagle comeback.

Fulton tacked on two more touchdowns, a 28-yard touchdown pass from Penny Smith to Tim Ramsey and a six-yard touchdown run by Zach Winston. That made it 48-10 with 9:09 left, which was the final score.

After the game, Black praised Rollins. “Daryl broke a record with a long line of (Fulton) good running backs. Daryl will be the first to tell you that that offensive line up front was pushing people around tonight.”

Fulton improved to 5-1 on the year with the victory and will travel to Gatlinburg Pittman next week. Gibbs fell to 4-3 and visits Carter.