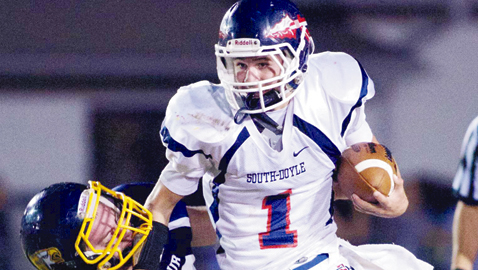 Brody Rollins, South-Doyle quarterback and the school’s Male Athlete of the Year for 2013-14, battles for yardage in a win over Seymour last season.

Brody Rollins has been a three-sport athlete at South-Doyle throughout his high school career, but with just one year to go and having a goal of earning a college football scholarship, he admitted last week he had thought of cutting back and focusing on football.

“It’s crossed my mind,” he said, “to concentrate just on football, in order to get stronger and better prepared.

“But other coaches come to me, and I can’t say no. I just end up playing all three.”

Despite the unselfish path, where the load is tripled, Rollins believes he can still be just as good in football. He’s willing to do whatever it takes.

“Brody is a great athlete, but he is even a better person and leader within the South-Doyle community,” said Clark Duncan, the school’s athletic director and head football coach, in his announcement that Rollins was South-Doyle’s Male Athlete of he Year for 2013-14.

“He has started in football, basketball and baseball ever since he stepped on the South-Doyle campus as a freshman.

“In today’s athletic world,” added Duncan, “so many athletes feel as though they have to focus on one sport in order to be successful. Brody brings back that old-school mentality that I’m going to play whatever sport is being played at that time of the year. Brody not only participates in three sports, but he excels in all three.”

Rollins, the starting quarterback and free safety, led the Cherokees to their third consecutive appearance in the TSSAA state playoffs last fall. South-Doyle posted an 8-4 record after a second-round loss at Anderson County in Class 5A.

Operating the zone read attack, Rollins rushed for over 1,000 yards and passed for over 600 in earning first-team All-IMAC district honors.

Brody plays the No. 2 position or wing in basketball. As a sophomore, he had helped the Cherokees advance to the Region 1-AAA for the first time in 17 years. This past winter, they defeated Seymour to open district play but were eliminated by Cocke County.

The 5-11, 165-pound southpaw was the baseball team’s No. 2 starting pitcher and center fielder. Batting leadoff, Rollins hit .330 and also was an All-IMAC first-team selection. The Cherokees lost to Morristown West in the District 2-AAA semifinals, finishing one win short of region play.

“Football definitely,” he answered. “It always has been.

As he approaches his senior year, Rollins’ goals are set, too.

“My first goal is to win a state championship in football,” he said, “and to get an offer to play football at the next level.”

In the offensive backfield with Rollins will be running backs Joc Bruce, who recently received a scholarship offer and committed to play for UT, and Malik Lundy.

“All of our skill level players are coming back and most of the linemen,” said Rollins. “We should be pretty good. But we got to put in the work.”

Away from the ball fields, Brody, who carries a GPA over 3.0, “likes going fishing.” He enjoys the “free time and catching them.” It’s a family thing, too, he said.

By the way, Brody’s dad, John, was a standout football player at Doyle High in the 1980s and played his junior and senior seasons of college ball for Johnny Majors at Tennessee as a tight end and fullback. He’s now in his fourth season as a non-faculty assistant coach on Duncan’s staff.

Brody’s stepbrother, Austin, played football and rugby at South-Doyle and is now a Navy Seal. Sister Kendall will be a freshman this fall and plays volleyball and softball.

Sherry, Brody’s mom, “doesn’t miss a game,” he said, and is good at picking up his spirits when needed. That quality probably stems from her time as a Doyle cheerleader.

Of course, for Brody, a pep talk hasn’t been needed too often.