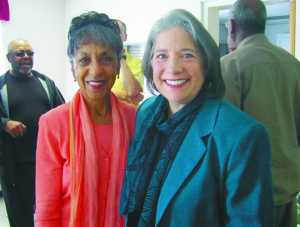 The mayor is hoping that these “Night Out” meetings will help neighbors and the city work together. “We want neighborhoods to be organized, to work on issues themselves, and it really starts with a certain expectation and taking responsibility in your own neighborhood, and then working together in partnership with the city,” said Mayor Rogero.

Some members of the community expressed concerns about safety.  Brian Tillery became emotional when explaining how his thirteen year old has to sleep in the middle room instead of his own bedroom because his bedroom is at the front of the house.  “Bullets don’t have eyes,” said Tillery.  “We have to lock down.  We have to work together.”

Other residents expressed concern about teenagers not having enough to do.  Jennifer Butler from Emerald Youth’s Just Lead program reminded everyone that the GLAD Center was open 7 days a week and is free of charge.    Joe Walsh encouraged everyone to get their families outside and to take advantage of the parks.  When Marlow asked about benches and picnic tables needed at the neighborhood park, Walsh expressed a willingness to assist with that.

Paul Berney, Mechanicsville resident and officer of the neighborhood watch, informed everyone about a new neighborhood walks program that will take place every Monday and Wednesday.  On April 21, Earth Day, there will be a neighborhood clean-up.

The subject of 311 came up often.  Police Captain Don Jones encouraged people to use it when appropriate in order to establish documentation of particular issues. Earlier in the evening, he also assured people, when asked about it, that arrests had been made involving a recent shooting in the area.

Concluding the meeting, Rogero said, “I hope you realize that we do care.  We care about what’s happening to you.  We hear you.  We’ve taken a lot of notes and we’re going to do whatever we can to make Mechanicsville a better place to live.”