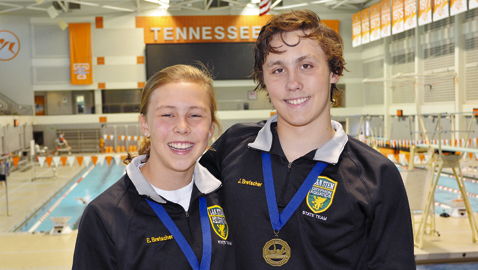 Brother and sister James and Emily Bretscher are L&N STEM Academy’s Student-Athletes of the Year. They were state champions in swimming and diving, respectively.

James Bretscher was determined to have a strong senior season in swimming, and his years of hard work and effort were rewarded.

The rapidly improving Bretscher not only won the 100-yard butterfly and 100 backstroke events at the 2015 TISCA Tennessee State High School Swimming and Diving Championships in February, he posted times that were among the best in the nation for graduating seniors.

“He dramatically dropped his times,” pointed out David Combs, assistant principal and athletic director at L&N STEM Academy, in announcing Bretscher as the school’s male Student-Athlete of the Year.

A member of L&N STEM Academy’s first four-year graduating class, Bretscher was a team captain and lettered all four years in swimming.

The North Carolina State University signee has the potential to be a difference-maker for the Wolfpack in the butterfly events. He broke 50 seconds in the 100 butterfly for the first time last summer and continued to lower the time in the following months.

Bretscher’s time in the 100 backstroke state finals this year also was almost three seconds faster than his junior time.

“I feel like the biggest thing that helped me improve was perseverance,” stated Bretscher via e-mail.

“I have been swimming since I was 8. I was never near the top or the fastest for a long time. I was actually at the bottom and a slow swimmer.”

In his junior year of high school, Bretscher missed qualifying for several national-level meets by hundredths of a second.

“It was very disappointing for me,” he recalled.

“So going into my senior year, I was very ambitious to have a successful swim season. I have put in a lot of work and effort over the years and it all finally paid off at the state swim meet when I went those times.

“Honestly, it’s a blessing from God. I give Him all the credit for my success. Earlier this year, I wasn’t really fast enough to swim in college at a D1 level. Now I have the opportunity to swim with one of the fastest teams in the nation. God had a plan for me all along, and perseverance paid off.”

“I wanted a school that would allow me to excel in both swimming and academics,” pointed out Bretscher, who had a 3.5 grade point average at L&N. “I also looked for great coaches and a great team and environment. NC State offered all of this.”

Bretscher and NC State’s swimming program also have something in common.

“I love underdogs,” he noted. “I have always been one and NC State is one, too. Five years ago, NC State wasn’t at NCAAs. This past year, they were eighth in the country. That’s quite a leap!

“After meeting the coaches and team, I understand why they made that leap and I look forward to joining them next year!”

Emily Bretscher’s sophomore high school diving season was capped by her being named the Female Diver of the Meet in the 2015 TISCA Tennessee State High School Swimming and Diving Championships.

Bretscher was undefeated during the dual meet season and won both the KISL (City meet) and state titles.

L&N STEM Academy’s female Student-Athlete of the Year, according to Assistant Principal and Athletic Director David Combs, Bretscher also sparkled in the classroom with a 4.0 GPA, was inducted into the National Honor Society and served as Sophomore SGA class president.

She enjoys and takes pride in both her athletic and academic pursuits.

“While I dive for L&N STEM during high school season, I train year round with TN dive team under Coach Mike Wright,” Emily stated via e-mail. “I love my sport and am blessed to dive with such an amazing coach, team and program. My future goals are to dive in college, and to someday make it to the Olympics.”

High school diving competition is from 1 meter. Other times, she competes from 3 meters in springboard diving and most of her platform dives are from 10 meters.

Bretscher started diving at an early age, but stopped for around five years to focus on trampoline and tumbling. She got back into diving about 2½ years ago.

“I swam when I was a little girl, but I do not swim competitively anymore,” she noted.

With her position in the Student Government Association, Bretscher had to deal with efficiently managing her time.

“I really enjoyed being the sophomore class president,” she said. “I was able to help with many class and school-wide events. It was great to see how these events brought the school closer together.

“The most challenging part was handling the stress of balancing all I had to do. It was all worth it to see the happiness and joy it brought to others.”