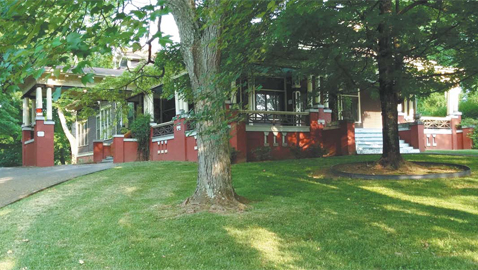 Photos by Mike Steely.
Efforts are underway to save the historic Howard Home on Broadway and the neighboring church from becoming demolished to build a Walmart Neighborhood Complex.

On Sunday, May 17, people interested in preserving the Howard Home at 2921 Broadway met at 4 p.m. in the Fellowship Hall of the Central United Methodist Church at 210 East Third Street.

The historic home is said to be the possible future location of a Walmart Neighborhood Market and the structure is one of the few remaining homes on Broadway. While the plans by the national chain store have not been presented to the Metropolitan Planning Commission yet, a zoning change could be requested in the planners in their June or July meeting.

The Centerpointe Church next door is also in the proposed Walmart complex and would also be demolished if plans are submitted and approved by the city. A petition and fund raiser is currently underway to preserve the historic home but apparently about $1.5 million would be needed to buy the home property and $2.3 to purchase the Centerpointe Church property.

The home was owned by the late Paul Howard, a former city councilman, and is located along the commercial strip and was built about 1910.

Various neighborhood groups have rallied over the past couple of years in attempts to save various historic homes and buildings in Knox County. A request for rezoning and demolition of the Howard Home could run into a new ordinance being considered in Knoxville to delay demolition of a historic structure for 60 days. That change was passed on first reading by the City Council Tuesday evening.

Request for demolition would be reviewed by Kaye Graybeal, Historic Preservation Planner of the Metropolitan Planning Commission, and the owner notified. However, if no public or private resolution to save the structure the permit would be issued after the 60 days.

The preservation idea could be extended beyond the recognized historic structures like those on the National Register of Historic Places and buildings and houses within a historic district, to include not only those built before 1865 but also structures recognized locally as historically importance for their use, owners, or residents.

The Knoxville Historic Planning Commission reviews exterior changes to homes designated as historic or in historically zoned neighborhoods. That includes building on to the building, additions of out buildings such as shed and garages, changing a porch, steps, doors and windows.

Homes placed on a local historic list would be done so and the owners notified of the action.

The Howard Home has jumped to the top of the “Fragile 15” list issued by Knox Heritage in the annual report.

“Built in an era when many prominent Knoxvillians lived on Broadway it has been home to two City Councilman, a Knox County Trustee and a Knoxville City Manager. During an era when Broadway was becoming known as part of the national Dixie Highway the house served for several years as the Minton Tourist Home. For more than 60 years it has been the home of the Howards, a prosperous plumbing-supplies family,” the Knox Heritage report says.

The endangered listing also notes that the home is “one of the finest examples of Craftsman style architecture still standing in Knoxville.” Twice Knox Heritage awarded the home for quality maintenance and care to Mr. and Mrs. Paul E. Howard.

The Howard House is currently zoned for office use and a rezoning would be required. It’s part of an estate which requires the house to be sold and is currently under contract to a developer who represents “a national big box retailer and plans call for its demolition.”

“Knox Heritage is currently in discussions with the developer in an effort to find an alternative to the destruction,” the report continues, adding, “If these efforts fail we will ask citizens to join us in opposing the rezoning of the property if it is requested through MPC and City Council.”

The Howard House and property contains 2.4 acres, a gazebo, tennis courts and gardens. Knox Heritage has a $100,000 challenge gift from an anonymous donor and is asking for help in saving the house. You can contact the organization at knoxheritage.org or call (865)523-8008.

You can also help by going online and signing the “Save The Howard House Petition.”

“The funding raised by Knox Heritage will allow us to purchase this property and save it from the wrecking ball. All contributions, no matter how large or small, make a difference and are tax-deductible,” Knox Heritage said.

Several neighborhood organizations, including the new North Knoxville Community Coalition have voice support in the effort.

Such an effort was also used in preventing the destruction of the Christenberry Home.