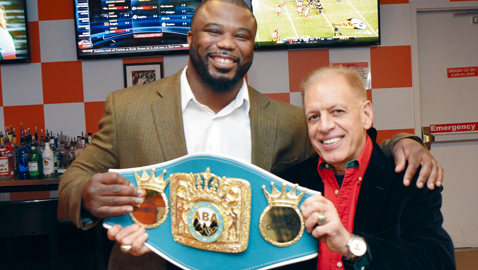 Photo by Dan Andrews. Recently, Alonzo Butler visited Doc’s All American Grille ( pictured above with Dr. John Staley ). Butler is an ambassador the Scarecrow Foundation, which promotes “entertainment with purpose.” The organization’s primary goal is to end hunger in America. They work together with local athletes, musicians, comedians, and civic and business leaders to raise awareness and funds for other local non-profits also committed to fighting hunger.

“No one should go to bed hungry.”

It’s a simple statement that everyone can agree with, yet we still have hunger. Jimmy Buckner and the Scarecrow Foundation are doing something about it. Over the past couple of years the non-profit group has organized and sponsored dozens of events and, in 2014, are hoping for even more.

For each event, be it “Downtown Derby,” “Gator Hator Week,” or others, the Scarecrow Foundation organizes and promotes the events with the proceeds going to local groups working to feed the hungry.

Buckner said the last two years have been a work on “Branding” the organization, which has no headquarters or staff. Everyone is a volunteer, including professional and business people, organizations, local celebrities, etc. Many people become “Scarecrow Ambassadors” and among them are folks like heavy weight boxing champion Alonzo “Big Oz” Butler, Spanky Brown, Eric Baker, and many more.

“Entertainment with a Purpose” is Scarecrow’s motto. Buckner said he gets lot of cooperation from the University of Tennessee and that many events attract young people from campus who gan quickly get involved in helping to feed hungry people.

“They can touch hunger, on the front lines,” he said.

A couple of projects in 2014 will include a fund raiser for Scarecrow that has not been done before. “We haven’t asked anyone for anything (in the past)” he said.

Another project being considered is a website and promotion of a “Scarecrow Diet.Com” that will encourage and guide people toward improving their health as they also volunteer at local hunger agencies.

“It will be our first national program,” he said. There’s also talk of an idea called “Scarecrow Stables” that would involve horse racing with Scarecrow silks being worn by jockeys.

Scarecrow supports existing organizations, like The Love Kitchen and others, who provide food for the needy, homeless, and the hungry.

“No one should go hungry, it’s as simple as that,” he said.