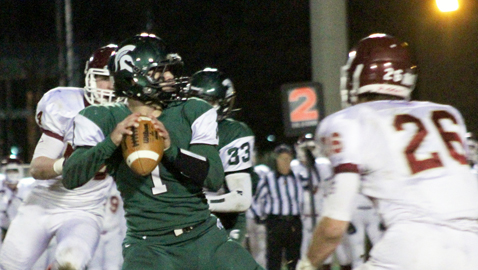 PHOTO BY CATHY DOWHOS-O’GORMAN
Webb quarterback Brock Beeler hangs in the pocket, with ECS end Christian Rosenberger (26) closing in, to make a pass during the Spartans’ 21-7 win over the Eagles in Friday night semifinal action at Faust Field.

Brock Beeler had tears in his eyes.

The Webb School senior quarterback was happy the Spartans had defeated Evangelical Christian School and would be advancing to the TSSAA Division II-A state championship game.

But he was also sad about having just played his last game at Faust Field.

Yes, it was a bittersweet night for the quick and tough QB, who combined with senior teammate Brant Mitchell to lead the Webb attack in a 21-7 semifinal win over ECS Friday night.

“I’ve never wanted a game this bad,” said Beeler. “Webb teams are suppose to win state. To go back for the third year in a row – that’s been our goal all season, and now that we’re going back, it’s so sweet.”

Beeler had a hand in all three Webb touchdowns against ECS (9-3), scoring on a sneak from the 1, a 5-yard run and tossing a 5-yard pass to Andrew Craig.

His quickness helped him extend plays and rush for 70 yards on 10 carries in the first half as the Spartans seized a 14-7 advantage.

Beeler also completed 6 of 12 pass attempts for 140 yards, with pass plays of 52 yards to Christopher Stephens in the second quarter and 46 yards to Mason Staten in the third quarter setting up TDs.

Beeler didn’t get to see how the pass to Staten turned out, but the crowd told him.

“I got driven into the ground,” he recalled. “I looked up and heard the crowd cheering. I saw it was coming from our side, so I knew it was a helluva catch. Number 26 (defensive end Christian Rosenberger) was after me all night. He played a great game. Mason just made a great catch. It was huge.”

The Spartans marched 70 yards in a 14-play, 7½-minute game-opening drive. Mitchell, a Georgia Tech commitment, did the bulk of the work.

“It was a great drive,” said Dave Meske, veteran Webb coach. “We wanted to come out and be physical. Brant Mitchell is hard to handle at 245 pounds. He carried the ball quite a bit that drive (nine times for 43 yards) and our offensive line did a good job.”

Mitchell seemed to get stronger as the game got longer, bouncing off tacklers and running over some. The workhorse finished the night with 117 yards on 30 carries.

“He’s played his best two high school games the past two games,” said Meske. “I’m proud of him for that.”

The Eagles from Memphis tied the score at 7-7 with a 94-yard kickoff return by Carter Dunn.

The closest ECS came to scoring again came late in the first half when quarterback Keegan Westbrook completed a pass, but the receiver fumbled and Stephens recovered at the Webb 26.

“We played unbelievable on defense,” said Meske. “We didn’t give up any points on defense.”

Westbrook completed 9 of 19 passes for 83 yards. The Eagles were limited to 64 yards rushing and seven first downs.

ECS, trailing 21-7, got to the Webb 33 late in the third quarter, but Cole Sams batted down a pass and Dean Miniard sacked the Eagles’ quarterback for a 7-yard loss on fourth down.

Mitchell had a fumble recovery and an interception in addition to his punishing style of running.

Webb missed on a 24-yard field goal attempt but consumed almost seven minutes in a drive to open the fourth quarter.

“I thought both teams played really hard,” said ECS Coach Geoff Walters. “We made some mistakes, dropped some balls and made a couple of turnovers, and you just don’t beat a good caliber team doing that kind of stuff.

“I was proud of our kids’ effort and hats off to Coach Meske and his group. I believe they’ll win them another state championship. They’ve got a good football team and he does a great job.”