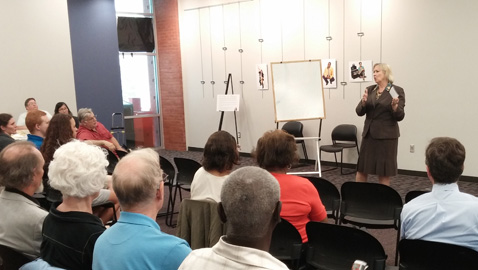 When state Senator Becky Duncan Massey was running for office she knocked on many doors. One of those doors was that of Michael Covington.

“Once you get to know Senator Massey you feel like you’ve known her for a long time,” Covington said last Monday.

“You didn’t open the door,” she joked back at him referring to her campaigning in his neighborhood.

Covington, since then, has organized and moderated the East Knoxville Community Forum and he introduced Massey to speak to members and guests at the Burlington Public Library, where the group meets monthly.

He went on to say he met the senator with a group of citizens protesting the relocation of the Tennova Hospital from East to West Knoxville and, after the unsuccessful meeting, Massey was waiting for the citizens outside the meeting room in Nashville.

Massey, who sits on the Health and Transportation Committees, told the Burlington Library crowd that unfortunately Tennessee is back down to being 45th in the nation for health care.

She spoke about legislation in general but went a bit deeper in her opposition to helmet-less motorcycle legislation. She said that her many years as Executive Director of the Sertoma Center in Knoxville brought her in contact with people with brain injuries and said she would always oppose legislation to permit motorcycle riding without helmets.

“If you want to be stupid enough to ride without a helmet you don’t realize the public and family cost,” she said, adding “I will actually fight that legislation.”

She also said that state-wide health insurance failed in the Health Committee by only one vote and that she and newly-elected state Senator Dr. Richard Briggs were for the legislation.

“That was an intense week and an interesting process,” she said, adding that the proponents in favor of a health plan were “brand new senators.”

Massey said the outlook for a state health plan might be better if it were introduced in a regular session and promoted by everyday citizens rather than hospitals.

The senator also joked that, in the room at the library, were more city, county and state elected officials and press than other citizens.

Massey was asked by several people to find a way to get the state involved in the revitalization of East Knoxville.

“I grew up here. I’m in and out of here all the time.” She said that improvements begin with the city and the county but added that “if they see things that legislation can help we work with them.”

In other matters Covington said he has invited the League of Women Voters to address the forum in July and later will have state Representative Joe Armstrong there. He said that developer and restorer David Dewhirst will also speak later in the year.

Sarah Bounds reported on a Knox County Health Department project in the Five Points neighborhood and Susan Bradford spoke on senior issues at the Knoxville-Knox County Office on Aging. Bradford said a grant has been received to increase SNAP benefits for seniors. She said the agency is offering personal focus attention to application, information gathering, and food stamp card use in person or on the phone. She said response so far has been great.