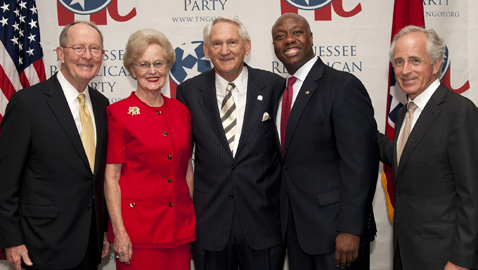 By Tasha Mahurin
tasha@knoxfocus.com
“I am both humbled and honored to be selected as the Stateswoman of the Year from the Second Congressional District by my Congressman, John J. (Jimmy) Duncan,” Phyllis Severance told the Focus.
Severance graduated from East High School in Knoxville, and she then attended the University of Tennessee. She met and married Charlie Severance, a former UT football player, in 1959. They went on to have 3 sons- Chuck, Marcus, and Michael. While staying home with her children, Severance became an active community volunteer.
She was a Charter member of Fountain City Town Hall and the Greater Knoxville Beautification Board. She became interested in the political process in 1970 and began volunteering with campaigns on the local, state, and national levels.
In 1978, she was the Knox County Office Manager for Lamar Alexander’s campaign for Governor of the State of Tennessee and, after the election, worked on Alexander’s staff for 8 years. And just ten years later, in 1988, she served as the Knox County Office Manager for George Herbert Walker Bush’s campaign for President of the United States of America
In 1994, Severance was the Area Director for Don Sundquist’s campaign for Governor of the State of Tennessee. She then served on the staff of Governor Don Sundquist, serving as the Assistant Commissioner of the Dept. of Personnel. She also served as the Human Resource Manager for Knox County Government from 2000 – 2003. In 2010, Severance was the Knox County Campaign Co-Chair for Bill Haslam for Governor, and in 2011, she served as Chairperson of the Knox County Republican Party. Although a passionate Republican, Severance’s accomplishments extend beyond politics.
She has also served on the University Of Tennessee School Of Music Advisory Board, the University of Tennessee Chancellors Associates, the Knoxville Opera Board, and the Knoxville Opera Guild Board, among others. Severance has received many awards and recognitions because of her commitment to these causes and her tireless volunteer spirit, although Severance credits her success to a higher power.
“God continues to shower me with His blessings, and I am grateful for His guidance and presence in my life,” Severance, a member of the First Baptist Church of Fountain City, told The Focus.
The 37th Tennessee Republican Party Statesmen’s Dinner was held on July 12 at the Music City Center in downtown Nashville. This year’s theme for the Statesmen’s Dinner was “Celebrating Our State”—a look at how Tennessee and the Republican Party offer the opportunity for achievement to every individual.