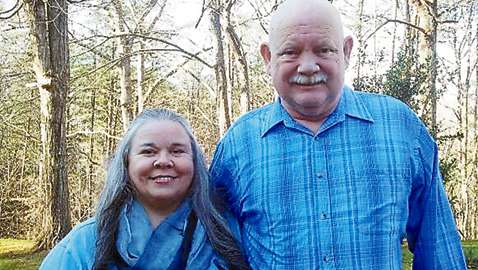 In the blink of an eye, life can change with devastating news. Because of the Thompson Cancer Survival Center efforts, the gloom that falls on some of their patients lessens as rays of hope shine through. Just ask Ernest and Gail Wright of Pigeon Forge.

In July 2012, Ernest, who worked as a chef in Pigeon Forge and also worked a second job, experienced numbness down his left arm and side. His family doctor admitted him into the hospital. Tests found tumors on his brain, and he was sent immediately to the Thompson Cancer Survival Center. On July 16, exploratory surgery revealed four tumors on his brain and relieved pressure on his brain. Another surgery was needed a week later to again relieve pressure.

The diagnosis scared and confused the Wrights. Ernest had small cell carcinoma of the brain and stage four lung cancer. He spent ten days in the hospital and then began treatment at the Center. That’s when optimism returned for him and Gail.

Dr. Michelene Liebman met with Ernest and discussed the course of treatment. Three weeks of radiation treatment required him to be at the Center five days a week and were followed by six weeks of chemotherapy.

“We weren’t sure what was going to happen, but Dr. Liebman took the time to answer every question we had. After talking to her, we knew what to expect during each stage of treatment,” Gail said.

During those treatments, the staff took special care of Ernest. They also welcomed Gail. The office workers knew that the Wrights were early risers and accommodated them with the earliest possible appointments. Nurses made sure Ernest was comfortable and warm, and they offered food and coffee.

“The nurses were wonderful. They went out of their ways to make sure we had anything needed and made us feel as if we were at home.”

The care from the Center didn’t stop with the medical personnel. Medical social worker Jessica Antal met with the Ernest and Gail to offer any help necessary.

“She gave us gas cards since we were driving back and forth every day.”

Antal also asked if they needed additional help. She realized that both were out of work and offered assistance in paying their electric bill.

“We were blown away and couldn’t understand why everyone was being so nice,” Gail said.

The Wrights’ view of cancer has changed. They see so many others who are being helped by the Center and realize they aren’t alone. Ernest is encouraged and strengthened in his battle against cancer. Gail is thankful and credits their strong faith in God for helping them find Thompson Cancer Survival Center.

Ernest and Gail have been married for 38 years, and both work in the food service industry. They have two daughters, Kristy and Kellyn. The family is awaiting the results of a PET scan so that the next course of treatment can be set. Gail said that doctors have told her that while Ernest’s disease is not curable, it is controllable.

The services and help that Thompson Cancer Survival Center provides are made possible through donations from a wide range of supporters and activities. Another opportunity to help and have fun comes by participating in the Game On Against Cancer. It’s a chance to take on Knoxville celebrities in one of several games. The event will be held on Friday, March 1 from 6-10 at Games and Things, located at 10706 Kingston Pike. Tickets are $50, and more information is available by visiting www.thompsoncancer.com/GameOn.