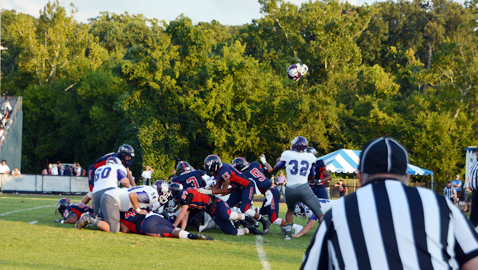 Photo by Dan Andrews.
Sevier County’s Dorian Banks loses his helmet but finds the end zone in the first quarter of the Smoky Bears game at Knoxville West High School. Sevier County got the win 29-26.”

Perhaps the most entertaining football game of the week took place on Thursday, August 27th in Knoxville.

Sevier County and Knoxville West, two teams with the potential to play well into November, gave a regional television audience a show.

In the end it was the right foot of Smoky Bears kicker Anthony Velasquez that made the difference in Sevier County’s 29-26 victory over the Rebels.

The Smoky Bears (2-0) got on the board first, on their second drive, when Dorian Banks, a Tennessee commitment for the Class of 2016, dove over the pile from two yards out, and Sevier County led 7-0 with 5:19 to go in the first quarter.

Early in the 2nd quarter a Sevier County mistake set the Rebels up with great field position.  Charlie Brown ran a long way to field a punt, but it hit him after a bounce.   West sophomore Juan Davis recovered, and the Rebels had the ball at the Smoky Bears 35.

West got to the 17, but on fourth a two a bad snap doomed the drive, and Sevier County took over at the 34-yard line.

After a penalty made it first and 15, Sevier County got tricky.  A double pass went from Deuce Wallace to Devante Matthews and then deep to Hunter Miniard.   The play went for 71 yards, and the Smoky Bears were in control 13-0 with 8:15 to go in the first half.

Late in the half a Rebels mistake proved to be costly.  Zach Harshey threw over the middle, and linebacker J.D. Griffin dropped into coverage and made the interception, giving the Smoky Bears the football at the West 29.

But just when you thought this would be a blowout, the Rebels offense gets moving.  A 60-yard drive culminating in a Harshey to Demarcus Smith touchdown pass from 2 yards out with only 2.5 seconds left in the first half.  The two point conversion didn’t work, but West had some momentum heading to the locker room, trailing 16-6.

It didn’t take long for West to get on the scoreboard once the game resumed.  A 74-yard pass play from Harshey to Jermaine Buchannon made it a 16-12 game after a blocker extra point, with 11:08 to go in the third quarter.

A 28-yard field goal from Velasquez put the Sevier County lead up to 19-12, but West once again used the big play.  And again it was Harshey to Buchannon.  A high arching pass down the middle of the field to a wide open Buchannon covered 67 yards and the game was tied at 19 with 4:45 to go in the third quarter.

It stayed that way until the fourth… when once again, the Smoky Bears went back in front.  With a first and goal from the West 6, Deuce Wallace threw to Griffin, who also plays fullback, and with 6:40 to go in the game, the Smoky Bears were up 26-19.

Demarcus Smith won a jump ball with Chase Wallace, then outran Banks and with 4:15 to go the game was even at 26.

Sevier County moved down the field, and with 53.4 seconds to go, it was 4th and 9 from the West 29.  The decision was made to try a long field goal instead of going for it.  Anthony Velasquez made his coaches look like geniuses, drilling a 46-yard field goal that would turn into a game winning kick when his team held the Rebels, forcing them to turn the ball over on downs.

It was Velasquez’s third field goal of the night.

Sevier County will try to improve to 3-0 this week when they host Cocke County.  West, the defending state champions in Class 5A, will try to bounce back when they go on the road to play Halls.