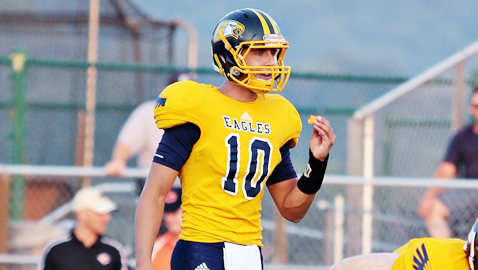 Nick Sexton, Seymour High’s senior quarterback, will be back in the starting lineup when the Eagles host Heritage Friday night.

Sexton, who missed almost all of Seymour’s Week 1 game against Clinton, a 27-7 loss, after suffering a sprained foot early in the contest, got the OK from his doctor around 1:30 Friday afternoon to return to action for the Eagles’ Week 2 game at Cocke County.

Coach Jim Moore put Sexton in the game in the second quarter, and he threw a touchdown pass to Braxton Dockery on his first possession back. That score gave Seymour a 10-0 lead and the Eagles went on to win 19-14.

“He’s not one who wants to sit out and have a long rehab,” said Coach Moore. “He wants to be in the game.”

Clayton Ogle, a sophomore, had suffered a high ankle sprain in a junior varsity game the Monday before Seymour hosted Clinton, so the Eagles turned to their No. 3 QB against the Dragons.

“Brandon Gann came in and did a good job,” noted Moore. “He completed over 60 percent. He just doesn’t have the experience, even though he is a senior.”

With Sexton’s playing status uncertain, Gann got all the reps in practice last week, according to Moore. He started against Cocke County and the Eagles were ahead 3-0 when Sexton returned to play.

TV EXPOSURE: South-Doyle Coach Clark Duncan indicated his school is excited about the opportunity and plans to make the most of hosting this week’s Rivalry Thursday game on MyVLT at 7 p.m. The game will match a pair of early season unbeatens. Both South-Doyle and Hardin Valley Academy are 2-0.

“The media exposure is big because we will be up to share all the great things that are happening at South-Doyle High School, both athletically and academically,” noted Duncan, who is also athletic director.

COMING HOME: Roll out the red carpet for the Fulton Falcons, who will make their 2013 home debut Friday night, after winning their first three games by a combined score of 161-0. Farragut (2-1) will provide the opposition, and the Class 6A Admirals should be one of the toughest tests remaining on Fulton’s regular season schedule.

GOLD BOWL: Christian Academy of Knoxville has won the last two Class 3A state crowns and Webb School has brought three of the past four Division II-A gold footballs home.

“With each having so much success over the last number of years, this should be a great matchup and an exciting event for both school communities,” noted veteran Webb coach Dave Meske.

HEADLINERS: One team is certain to break into the win column when Central invades Karns. The Bobcats are 0-2 and the Beavers 0-3.

Other top attractions match Gibbs at Clinton, undefeated Grace Christian at McMinn Central, Asheville, N.C., at West and Jellico at The King’s Academy.

BRIGHT FUTURE: Catholic Coach Steve Matthews got a good look at Zach Stewart, 6-5, 300-pound junior lineman and a Class of 2015 UT commitment, when his Irishmen played at Coalfield in Week 1.

“Zach Stewart is a huge young man that can move very well,” pointed out Matthews. “He gave us problems all night, and he has a bright future.”

The Catholic coach also noted that the Irishmen’s Jordan Anderson “severely dislocated his ankle,” in the win at Coalfield. “He is still under evaluation, but we expect him to be out for an extended period of time.”