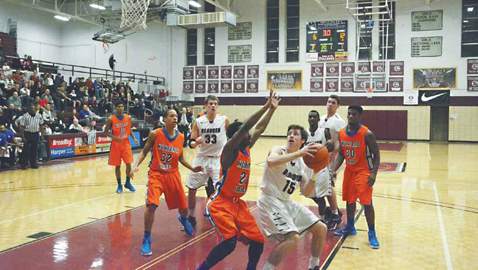 The Bulldogs, who were without the services of senior center Sam Phillips (who was nursing a back injury) and junior guard/forward William Snyder (flu), defeated Hunters Lane 60-44 early last week to win the Bearden BSN Sports Super 16. Despite being short-handed, the Bulldogs (17-0) were able to put the championship game away quickly.

Bearden, which played some stellar defense in tournament wins over Unicoi County and South-Doyle, was again stingy against the Warriors. The Bulldogs held a 37-13 halftime lead.

“In the first two games, they [Unicoi County and South-Doyle] had 10 points at halftime and tonight, they had 13,” Bearden coach Mark Blevins said. “We played good defense.

“We wanted to focus on playing good defense, rebounding and denying penetration and we did all three of those things.”

Bearden also played a little offense in the first half and had a balanced attack throughout the contest.

“In the first half, we were good on offense too,” Blevins said. “That wasn’t so much the case in the second half.

“But everybody stepped up tonight and that was big. Last year, we had guys have to step up because we had so many injuries.”

Despite being without Snyder, a 3-point marksman, the Bulldogs, managed to boast a balanced attack. Center Jason Smith led the way with 23 points, including 18 before halftime. Austin Duncan added 10 and Jake Elkins finished with eight.

Bearden held a 57-20 lead at the end of the third quarter and that gave Blevins, the Bulldogs’ longtime coach who won his 12th Super 16 Tournament, to give some junior varsity players some playing time.

The reserves got a little sloppy and that enabled the Warriors to pull to within 59-44 late and Blevins re-inserted his starters.

Austin Carey led Hunters Lane with 13 points (all in the second half) and Jordan Buckner added 10.

Carey and Buckner were named to the all-tournament team along with Smith, Duncan and Bearden point guard Quez Fair.

Fair, who had four points against the Warriors in the championship game, was named the event’s Most Valuable Player. Christian Academy of Knoxville, which defeated South-Doyle in the third-place game, was represented on the squad by Lucas Campbell.