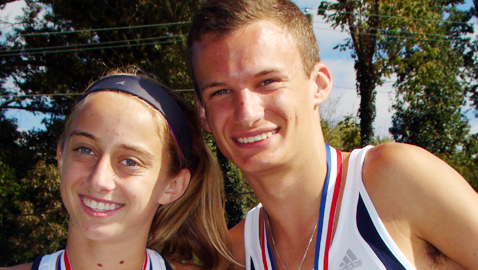 PHOTO BY STEVE WILLIAMS
Hardin Valley Academy’s Emma Mashburn and Aaron Templeton began their senior years last October by repeating as Knoxville Interscholastic League cross country champions. They ended their prep careers in May by winning state championships in the 3200-meter run at the TSSAA meet in Murfreesboro.

Devin Sibley, Karns High’s Male Athlete of the Year, finished as the school’s all-time leading scorer in basketball with 2,239 points.

He was nominated for McDonald’s All-America honors his senior season.

Sibley also was a two-time TBCA All-State, PrepXtra and All-Knoxville Interscholastic League honoree and PrepXtra Player of the Year in 2013-14.

The talented and entertaining Karns player signed with Furman.

At Hardin Valley Academy, senior Emma Mashburn completed an outstanding career as a distance runner and is the school’s Female Athlete of the Year, said athletic director George Ashe.

Mashburn, who posted a time of 10:52.35 in winning the 3200-meter run at the state, earned All-State honors three times in track and twice in cross country.

Aaron Templeton, HVA’s Male Athlete of the Year and one of the most decorated distance runners in KIL prep history as well as the state, was a two-time TSSAA cross country champion, noted Ashe. The Furman signee also earned prep All-America honors his junior and senior seasons as he advanced to compete in the national high school cross country meet.

Farragut’s Female Athlete of the Year is Katie Beuerlein, who competed in soccer and track. She was fifth in the state high jump event and also placed seventh in the Class AAA state pentathlon.

In announcing Farragut’s honorees, Smith said, “Both athletes have excelled athletically and academically. They have represented FHS with class and we are proud of all their accomplishments.”