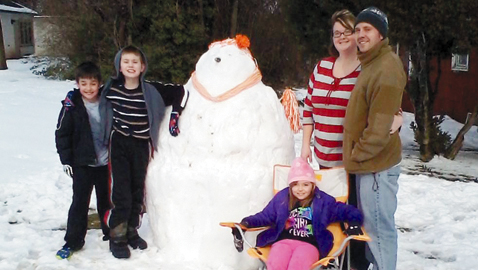 It was the right kind of snow for making a snowman.

Make that a big snowman.

Jason Welch found out last Wednesday night’s 4½ inches of snowfall packed tight and heavy as he began making a snowman the day after in his yard at 5120 Schubert Road in the Inskip community.

“I know I can push 385 pounds with my legs when I’m working out,” said Welch, who got to a point where the lower section of his snowman was “pretty heavy” and he needed some help.

Three youngsters were eager to help.

Or in this case, they volunteered to help.

Soon, the snowman, named “Snowflake Volunteer,” stood in the front yard. All white with some orange accessories.

“We’re Tennessee fans big time,” said Sabrina Welch, Jason’s wife. “We had to do something with Tennessee (theme). I even brought over the orange UT chair from the front porch and put beside him.

“We didn’t know it was going to turn out that big.”

According to anonymous sources, Butch Jones, Tennessee head football coach, likes the size of the new prospect, but doubts “Snowflake Volunteer” could make it through spring practice, which begins March 24.