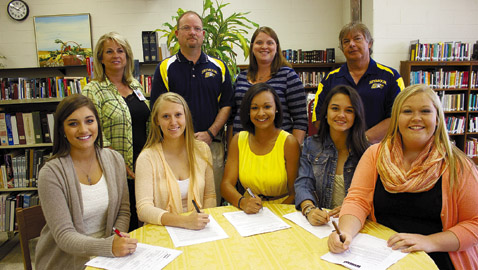 “Seymour players have become very attractive to coaches in this region,” Doyle said after six of his athletes signed National Letters of Intent to continue playing the sport in college. “Coaches have seen the girls play during the season [and in the] summer and are thoroughly impressed by their work ethic and heart.

“They are also amazed by their rapid rise in their talent level. This is due to the fact that these girls work non-stop to improve themselves.”

Three Lady Eagles are headed to Tusculum College. Jessica Donaldson, Lilian Lesniewski and Shelby Moon will play for the Lady Pioneers, who will begin competition in 2015.

Lesniewski, who is Seymour’s leading scorer, will pursue a degree in physical therapy. Moon will study nursing and Donaldson will enter college as an undeclared major.

Gray, who will major in veterinary science, will play at the University of Virginia-Wise. She’ll be a key defensive presence for the Lady Cavaliers, who will also begin competing at the NCAA Division II level next season.

Pack will attend Lincoln Memorial University. The Lady Railsplitters will also begin playing in 2015. She will also be a nursing major.

She accepted an appointment to the Air Force Academy. She is the fifth Seymour student (and first female) to receive an appointment from a service academy.

As a coach, Doyle is extremely proud of his athletes.

“To me, it’s not so much about wins and losses,” he said. “I want to see that they can succeed at the next level.

“With lacrosse as new as it is here, [college coaches] are not necessarily looking for the best lacrosse players. They’re looking for players who have guts, heart and, quite frankly, a little bit of meanness.”