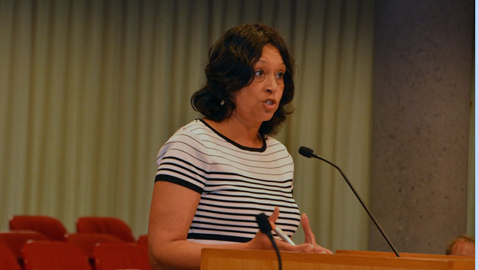 Photo by Dan Andrews
Dawn Michelle Foster speaks to the city council concerning an application to the federal government for a grant of $ 24 million to build a pedestrian bridge from South Knoxville to the UT Campus.

On the same day that the Knoxville City Council passed a 60-day waiting period on the demolition of historic homes, the Christenberry House on Kingston Pike was demolished. Just hours before the 7 p.m. council meeting wrecking crews destroyed the historic home.

Kim Trent, Executive Director of Knox Heritage, spoke to the council prior to the demolition delay vote.

“Today for me it shows why this is important to the city,” she said and called the demolition a “permanent act to solve a temporary problem.”

The 60-day waiting period might have given the city, Knox Heritage and other groups time to organize more and possibly save the home or make arrangements to salvage building materials. The new ordinance does not, however, prevent owners of historic properties from demolishing structures if they wish; property owners are not even required to work with preservation efforts. After the waiting period a demolition permit would be issued.

Owners of the home and the almost five acres of lakefront property reportedly said the structure was beyond repair and plan to build a new home there. The Christenberry House was on the recent “Fragile Fifteen” list of endangered houses issued annually by Knox Heritage.

The Howard House on Broadway would fall under the new regulation. A Walmart Neighborhood Market is proposed for the site along with the site of the Centerpointe Church next door but a rezoning request has not been filed yet for those sites.

In other action the city council voted to pass Mayor Madeline Rogero’s annual budget, to fund the city departments and to set the “no tax increase” rate. Councilman Nick Della Volpe jokingly asked the mayor not to spend the entire budget. She replied that Della Volpe could tell her which project in his district should be cut.

United Way President Ben Landers informed the council that the 211 Helpline will now be a partner with CAC’s 311 center. He said the Community Action Committee will handle the 211 calls and provide information to callers about various local services such as shelter, food, housing, and medical care, etc. Landers said the United Way and other agencies began the local 211 service 20 years ago and the service has been privately funded.

He praised Knoxville’s 311 helpline as “one of the best in the nation” and said the contract is for one year.

The application for a $24 million grant from the U.S. Department of Transportation for possible construction of a pedestrian and bicycle bridge from south of the river to the University of Tennessee campus was authorized. The city would match with $6 million in funding. The project has been discussed for many years and is contingent on federal funding.

“If UT isn’t a player I don’t think we’ll come up with the money,” Councilman Nick Della Volpe said. The span would mainly serve UT student housing on the south side and offer access directly onto the campus.

Dawn Michelle Foster, Deputy Director of the Office of Redevelopment, said the bridge is “a great project to move forward with.”

The council also voted to recognize the late Mayor Kyle Testerman by naming a tennis complex in his honor. Members of the Testerman family were present and said that Testerman learned of the honor prior to passing and was delighted with the honor. Testerman was a founder of the Knoxville Racket Club, a business leader, an attorney, and in 1972 became Knoxville’s youngest mayor.

Knoxville became a “Purple City” in a council vote and one of the first in the nation to begin a program to inform people how to deal with fellow citizens with dementia.

The council also authorized the Knoxville Area Transit to purchase fourteen “low-floor cutaway buses” over the next five years, allocating $629,940 for the first year for the purchase of five buses.

They also authorized a tax break for the White Lily partners for property on North Central and East Depot Streets, purchased sidewalk easements at 514 West Jackson Avenue, and accepted the donation by the Tennessee Air National Guard for the donation of two gas ID meters for the fire department.