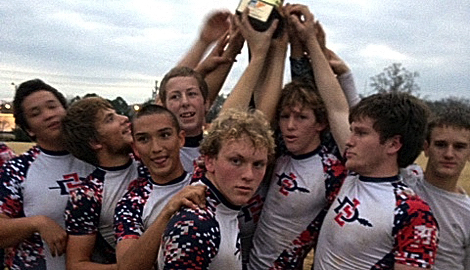 The Cherokees played in a grueling Tennessee Rugby Association Olympic Rugby Sevens title on Saturday, Dec. 8. It was South Doyle’s second championship in three years. The Cherokees, who were the 2011 runners-up, also claimed the 2010 title.

South Doyle won five matches to claim its most recent title in one of East Tennessee’s fastest growing sports.

The ‘Kees, who began training and practicing in June, won the championship with a 29-7 victory over Knox County rival Farragut. That victory culminated a grueling day that saw South Doyle, which has compiled a gaudy 107-10 record over the last three seasons.

“Every guy on our team played better than they were capable of playing,” Cherokees coach Matt Lance said. “We’ve got guys who have played football and wrestled but they take pride in their rugby record.

“It’s good to see these kids win because they’re all great kids and great students. They work hard and they play hard.”

Lance obviously admires his club’s work ethic. He couldn’t, however, have expected what he saw after his bruised and battered squad beat the Admirals on a day that began at 9 am.

“I told them that they needed a break because they’d been at this since June,” he said. “And I couldn’t believe how mad they got at me.

“They were so mad at me that I almost didn’t get out of the room.”

The Cherokees will take their break. They’ll return to the field in January to prepare for the 15-man season that opens in the spring.

“We’ll enjoy our time off,” said Cherokees senior co-captain Gabe Harris, who was named the State Tournament’s Most Valuable Player. “We were mad when he told us to take some time off.

The Cherokees’ stay at the Midstate proved to a tough one as South-Doyle opened a long Saturday with a 33-26 victory over Ravenwood. The Cherokees then knocked off Germantown 29-5. A 38-12 victory then put the ‘Kees in the semifinals.

No rugby match is easy but the semifinal match against Sumner County was especially trying for South Doyle, which trailed 14-0 at halftime before storming back. The Cherokees scored 19 unanswered points to capture a thrilling 19-14 win in the match’s waning moments.

Lance had high praise for his players, who spent time between matches icing leg injuries.

“We had guys, who couldn’t walk between matches,” Lance said. “They were at the gas station buying ice. They spent the time between matches icing down.”

Harris might’ve been named MVP but the Cherokees got significant contributions from seniors Seth Ohle (a co-captain), Colton Warner (who play every minute of every match) and Jacob Rule, who battled multiple injuries. Freshman Jonathan Doster also made big plays for South Doyle.

Harris said the State Championship was a total team effort.

“It was all about the team the whole time,” he said. “Coach Lance doesn’t keep stats. We want to win.

“I’ve been playing since my sophomore year and I don’t have any idea how many points I’ve scored.”

Lance added that unselfishness has always been a key to his team’s success.

“These kids love to play for each other,” said Lance, who is an assistant football coach and teacher at the school. “They don’t care about [individual] stats and they don’t care if there’s nobody in the stands.

“They love to practice and they love each other and that’s great to see in 2012.”