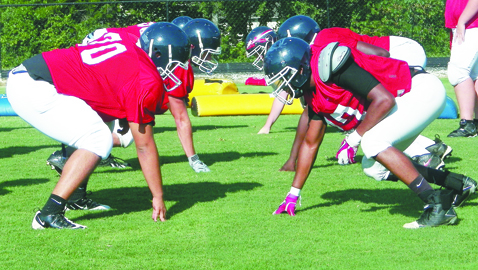 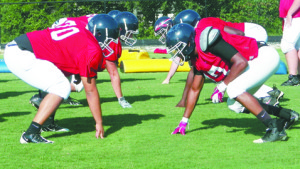 Photo by Curtis Trotter. A mature offensive line is returning to South Doyle this year, which will be beneficial to the new focus on the running game.

When South Doyle High School football coach Clark Duncan needs to get some questions answered about his football team, he just loads up the squad on a bus and heads west on I-40. For two consecutive years, Duncan has placed his tribe of Cherokees on the turf of Tennessee Tech University in hopes of finding out just what will make his team click for the upcoming season. Last season, the Cherokees found themselves in the play-offs for the first time in years, thanks to the hard effort the team put forth in the off season of the 2011 campaign at the university campus. The 2012 season looks to be no different than last year. In fact, it just may be a little tougher for the South Doyle mentor to teach yet another young tribe just how things are done. With the loss of quarterback Taylor Mason and a slew of receivers, one may wonder what type of offense the 32-year veteran coach may run this year.

When he was asked that question by The Focus, he quickly had an answer. “We will be more of a run oriented football team this year, no doubt. With the maturity we have up front on the offensive line, there’s no reason we shouldn’t be,” Duncan continued. “We lost some great senior receivers last year to graduation, but no one up front on the offensive line, which is huge for us. We are not saying we won’t line up and throw it this year though. We are lucky to have Jacob Faucette and Brody Rollins at the quarterback position. You then add Malik Lundy at the tailback position and you have quite a nice offensive attack on your side.”

Defensively the Cherokees look even more promising with the return of senior defensive ends Julian Goins and Anthony Hamilton. Dennis Mongon will also anchor the defensive unit that is led by assistant coach Jeff Bryant. Duncan was all smiles when asked about his team’s progress defensively in the off season. “Coach Bryant does an outstanding job of getting these young men where they need to be as a unit. With him (Bryant) being a great state champion at Oak Ridge leading us speaks volumes to his ability to lead and coach these guys. Coach Bryant’s work ethic is never-ending. So glad to have him on staff,” Duncan said.

Mason McNutt (DT), Madison Bliss (LB), and Jacob Jones were mentioned by Duncan as important parts of the defense this year as well. “That inside seven has a chance to be really good. If those guys click and reach their potential, we’ll win some football games.”

Many games are won and lost in one department of any squad. That being the ‘special teams’ unit. South Doyle will be blessed once again with the services of place kicker and punter Caleb Mitchell. Duncan couldn’t be prouder of the way Mitchell played last year.

“Caleb put us in some great opportunities last year that helped us win some ball games. I like his leg strength and accuracy he brings to us. He will be a weapon for us down the road this year no doubt.”

Duncan retained all assistant coaches from last year’s squad as well. Those include John Gibson, Bobby Graham, Matt Lance, John Rollins, Austin Rutledge, John Snyder, Jeff Bryant, and Jay Whinery. “There is no way this team would work as well as it does without those guys. I am truly blessed to have the staff I do. Our players believe in them and I trust anything they coach on the field with these young men,” Duncan said of his assistants.

Last season South Doyle opened the season with a home victory over Karns.

This season the Cherokees will return that game to the Beavers on opening night. The win South Doyle placed over Karns last year seemed to spring board the Beavers to an outstanding season as they went on to win several consecutive games after the opening contest. Duncan is aware of just how good this Karns team can be. “This will be a good challenge for us as an opener no doubt. They are well coached and will be ready just like any other team on opening night. Just look what they did last year after coming to our place. If our football team will retain what they have learned in practice and apply what we teach day in and day out, we will win some football games.” Duncan concluded.