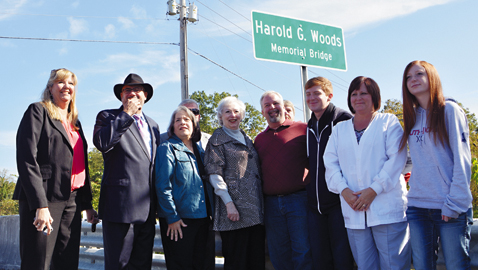 Photo by Dan Andrews.
Local leaders and friends and family of the late Harold G. Woods gathered last week to dedicate a bridge to his memory.

The Focus has reported on bridge names around Knox County including a recent “Our Neighborhoods” story that included the Henley, Buck Karnes, Bonnyman, J. Will Taylor, Ralph Adcock and Trooper Mike Slagle bridges. This past week a bridge was named in honor of a long-time community activist, an honor certainly deserved for his many years of service to the public.

Last Monday, state, county, and city officials assembled at the bridge on James White Parkway that crosses Sevier Avenue to dedicate the span as the “Harold G. Woods Memorial Bridge.”

More than 100 people turned out for the dedication including elected officials, civic leaders, family members, and the general public.

Woods passed away in January at 74 and was a longtime union representative, a board member of East Tennessee Public TV as treasurer; on the board of Cornerstone Recovery and Project Help.  He also served with the United Way, Boy Scouts of America, Child and Family Services, American Red Cross, National Family Services to America and many other organizations.

The late Woods also was on the Tennessee State Democratic Party Executive Committee and he and his wife of 52 years, Sylvia, are icons in the local labor and political community.

“It’s fitting that this bridge be named the Harold G. Woods Memorial Bridge and that it will forever honor an outstanding community leader,” Mayor Madeline Rogero said.

“I’ll always smile when I drive across this bridge and see the sign memorializing Harold’s life work.”