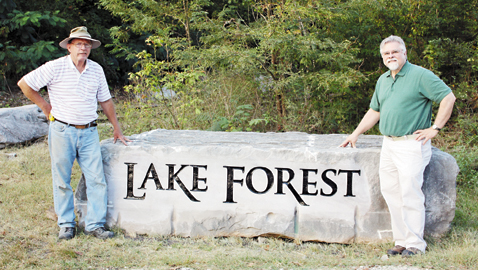 Two south Knoxville neighborhoods are distinct in creation and in style but share many similarities, such as Chapman Highway frontage and having beautiful homes, well-kept lawns, and proud home owners.

Lindbergh Forest was one of the first Knoxville subdivisions. Built by Victor McClain on land he bought from Samuel B. Luttrell, the development grew quickly after the construction of the Henley Street Bridge in 1931.  It has 38 historic houses built between 1929 and 1947 and the streets feature wrought iron lamp posts.

The neighborhood is wedged between Chapman Highway, Woodlawn, Moody and the James White Parkway

A newer section, Taliwa, was developed and became part of the neighborhood. Many of the homes feature Tennessee marble, quarried locally, and the area is on the National Register of Historic Places.

Although the neighborhood association in Lindbergh Forest is inactive at present according to Ann Viera, the past president, the group normally meets at the Greystone Presbyterian Church.

Lake Forest is further down Chapman Highway and is located between Chapman, Red Bud Road, May Apple, Kaywood and Lindy Drive. It’s on the Dogwood Trail and most of the homes were built following World War II with a mix of ranch-style homes and cottages.

Molly Gilbert is president of the Lake Forest Neighborhood Association. The city’s neighborhood website says the group promotes community involvement to improve safety and beauty with the ultimate goal to form a close knit community working together for the collective good and to have fun doing it. They also work to control traffic and speeding, litter and noise, crime prevention and preservation of the Dogwood Trail.

“For two years the Lake Forest Neighborhood Association has been working on a new entry sign project that has nearly come to completion,” Gilbert told The Focus.

“A block of Tennessee Pink Marble has been engraved with a new logo and will be moved into place in time for landscaping work geared to get the entire Chapman Highway Dogwood Trail visitor-ready by the spring,” she said.

Gilbert said the block of marble was donated by Ijams Nature Center, as the park is getting new signage. The logo on the front of the marble is being reworked to show the neighborhood logo. The logo design was created by David Gilbert, Pellissippi State Communications Graphic Technology Program Coordinator.

The new sign will celebrate the architectural style of many of the homes, walls, chimneys and front door entrances in the neighborhood. Tennessee pink marble has been used throughout the nation including in Washington, D.C.

The neighborhood is connected with the Urban Wilderness South Loop and the path connects Lake Forest with Mead’s Quarry.

“With all these lovely connections (to pink marble) the association wants to leverage their assets of architecture, a new sign, and the connection with the South Loop, plus the 60% tree coverage to showcase our Dogwood Trail,” she said.

The Lake Forest Neighborhood Association and the Colonial Village Neighborhood Association are collaborating on a Saturday, November 15 work day. Kasey Krouse, the city’s Urban Forester, is heading efforts for a general cleanup along the Chapman Highway Dogwood Trail. He’ll demonstrate the proper pruning techniques. The members and visitors will meet at Lake Forest Presbyterian Church at 9:30 in the lower level parking lot and then split up into teams to work on specific projects.

The Lake Forest Neighborhood Association meets the second Monday each month at the Lake Forest Presbyterian Church at 714 East Lake Forest Drive at 6:30 p.m.  You can call Molly Gilbert at 209-1820 or email her at mollygilbert@yahoo.com for more information.