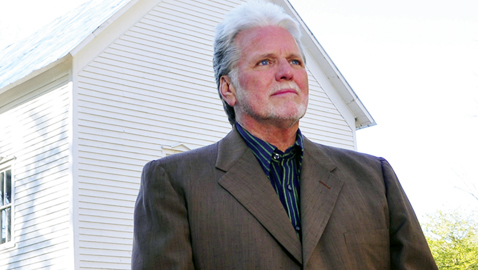 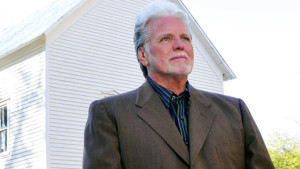 Con’s new gospel CD is being released on May 15th. Titled “Wayfarin’ Stranger,” this CD is Con’s first-ever gospel CD and is sure to become one of your favorites! Purchase the CD at www.conhunley.com or Disc Exchange.

I study the cover before opening it.  The simple format is striking.  A traditional, small country church, whose architectural style is fast fading from America’s landscape, stands proudly in the background.  In the shadows of leafless trees, its beautiful steeple meets the sky.  Standing in front of the church is a man I first heard of years ago.  My mind flashes through the pages of time in an instant.

While a University of Tennessee student, I worked for Congressman John J. Duncan, Jr., who was then a lawyer, and Zane Daniel, the legendary criminal defense attorney.  (Focus readers may recall my tribute to Zane when he passed away in “Life is a Gift,” 9-5-06.)  Before meeting Zane, I had imagined him listening to classical or opera music.  That notion went out the window the moment I met him.  This highly successful attorney was a fan of bluegrass and country music!  Zane knew Con Hunley, who was a young recording artist at the time; and he often mentioned him to me.  With his boyish grin and twinkle in his eye, Zane could talk about someone in a way that made me feel like I knew them, too.  Con is the man standing in front of the church, providing an inspirational scene for the CD that waits to be played.

Opening the “Wayfarin’ Stranger” CD is like unlocking a treasure-trove of music steeped in   history and heritage.  The inside cover features a photo of Con with his parents and siblings performing at the Bijou Theatre in Knoxville in 1982 where they sold out two nights back to back!  I scanned the selection of songs as I lifted the disc from its cover.  It was time to listen to the music, and I was anxious to hear the first chord.  Con’s powerful rendition of the beloved old hymn, “Amazing Grace,” is a perfect opening.  It is followed by a very special surprise, entitled “When I Was a Sinner,” which was written by Con’s Mother when she was only sixteen years old!  As a tribute to his father, Con sings “There’s a Leak in This Ol’ Building,” which was one of his Dad’s favorite songs.  Hunley certainly does justice to the song made popular in the seventies by Kris Kristofferson, “Why Me, Lord.”  A huge highlight on the CD comes when Con is joined by Bill Gaither, America’s gospel music legend.  Together, Gaither and Hunley deliver a memorable recording of the favorite old hymn, “Peace in the Valley.”  It has been said that family creates the best harmony, and it certainly proves true on this gospel CD with Con’s siblings providing the background vocals.  A wide variety of accompaniment from drums to the mandolin add so much to the total sound of the songs.

The collectible CD is a balanced blend of the old hymns and some new songs I had not heard before, like  “I Dreamed I Drove the Nails” and “Jonas.”  Both the old songs and the new ones have a common thread running through them:  Con sings from his soul on every one of them.  I found a new favorite in “A Little Bit of Jesus,” and I especially enjoyed an old favorite:  “Surely the Presence.”  No one sings Lanny Wolfe’s lyrics better or more beautifully than Con on this timeless hymn.  In fact, listeners can almost “hear the brush of angels’ wings” in Hunley’s controlled, easy-listening style.  The range of his voice, the clarity of his words, and the feeling in each note makes “Surely the Presence” a worshipful experience to the very end.  Long after the CD has stopped, I hear the song playing over in my mind.

As I close the cover on this collection of music and more, I see a very old church building with weathered boards.  It was organized by Con’s grandfather, a minister, in Luttrell.  What a rich tradition of family and music Con shares with his listeners on this compact disc.  Set for release May 15, this is the first ever gospel CD recorded by Con.  I certainly hope it will not be his last!  For more information about this talented and gifted artist, visit www.conhunley.com.