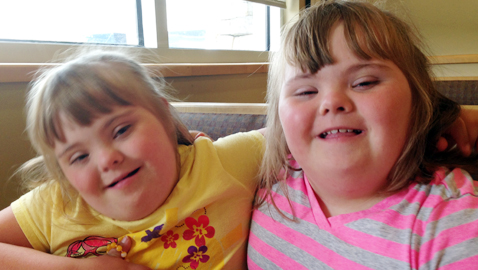 For this week’s Special Education feature, The Focus spoke with Patti Quinton, the mother of four beautiful girls. Caitlyn, 20, is currently a junior at the University of Tennessee.  Kristen, 15, is a sophomore at the L & N STEM Academy.  Laci and Elise, 10, are in fourth grade CDC-A at Rocky Hill Elementary.  Laci and Elise are identical twins diagnosed with Downs Syndrome at birth.

The Quinton family moved from Barrow County, Georgia to Knoxville in 2005. Patti taught for nine years in Georgia, and has been teaching in Knox County for the past three years. She says, “I love teaching, but I am concerned about the special education program in Knox County.”

Quinton speaks highly of Barrow County. She says, “When I left Barrow County, I left a school district that implemented an Inclusive Model for special education students.  Special needs students were mainstreamed into the Regular Ed. classroom.  These students were assigned their own personal teaching assistant.  Special ED teachers came into the regular education classroom to work with their students and/or pulled out according to the students’ IEP.”

She continues, “Special needs students spent most of their day in a regular education classroom with their assistant and their peers.  Academic modifications were made according to the students’ instructional level.  The only self-contained special education classrooms were for students with severe behavior issues.  Special needs students were given access to the regular education curriculum, instruction and social exposure.  There were no exclusions.”

Unfortunately, her daughters Laci and Elise have not experienced this kind of inclusion model in Knox County. When the girls were four years old, they were enrolled in the Fort Sanders Pre-K program. That is where Quinton had her first experience with Knox County’s so-called inclusion model.

Quinton met with a panel of teachers, therapists, and a psychologist. She was informed that her girls would be in a special education self-contained classroom. When she met with the psychologist privately, she was told that here girls were “mentally retarded” and that they would “learn very little academically.” This was in 2008!

Quinton said “I left the meeting that day with my heart broken.  I sat in my car and cried.  I couldn’t believe that the psychologist could use that terminology to refer to my children.  I thought educated people would have removed that word from their vocabulary by now.  What an experience it was.”

In 2010, Laci and Elise started Kindergarten at Rocky Hill Elementary. Quinton’s experience with Knox County’s special education “did not get any better.” Laci and Elise were enrolled in the after school program. After one week, their granddad went to pick them up and was told that Patti needed to call the director because they would not be keeping the twins in the after school program any longer due to their disability.

Quinton challenged this blatant and perhaps illegal discrimination, but she said the after school program at Rocky Hill had the support of the principal, and she had to make other arrangements for after school care.

Next, Quinton had the “pleasure” of experiencing Knox County IEP (Individualized Education Program) meetings. Here, she learned that her children were being “included,” but only during lunch, recess, and special areas.

“No one can make that determination when these children have not been given exposure to the same curriculum as regular education children,” said Quinton.  “Yes, they may not learn at the same pace but with the right support and accommodations they CAN learn.  My girls are smart little girls.  Knox County’s special education program has denied my children an opportunity to be educated to their highest potential.  They have set limits on my children by keeping them in a self-contained classroom.”

She adds, “When children are only exposed to that type of classroom setting, how can you expect them to learn anything different?  Children not only learn from their teachers, they also learn from their peers.  It is sad that in 2015 the special needs children are still being treated the same as those children twenty years ago, when the prevailing thought was that special needs children should not be seen, heard or educated.” Indeed.