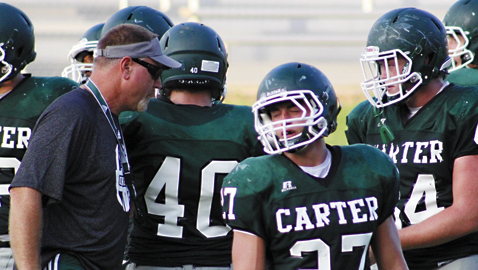 PHOTO BY MARSHA BRANCH
Jeff McMillan walks the sideline during a preseason scrimmage against Halls. McMillan, a standout on Carter’s 1976 team, will be in his first game as the Hornets’ head coach Thursday night against Gibbs.

After 38 years, Jeff McMillan and Carter High School football are back together again.

The reunion will become official Thursday night when Coach McMillan leads his Hornets onto the same field where he played his senior season of high school football in 1976.

Coincidentally, Carter’s season-opening opponent in 2014 will be the same as it was in ‘76 – the Gibbs Eagles.

With a 7 o’clock TV starting time, this year’s Carter-Gibbs clash also will kick off the state’s 2014 high school football season.

If it’s anything like last year’s contest, a 54-48 triple-overtime thriller won by Carter, fans will be in for a treat.

“The field and the stadium are in the same location,” said McMillan, reflecting on his return to his alma mater. “Obviously, they’ve been upgraded a whole lot since 1976, but knowing that’s the same field I played on – even though it does have grass on it now, it’s still the same field – that brings back some memories.”

There are other reminders of special football times for McMillan, who is now called “Coach Mac” by most of his players.

“Where the school parking lot is now is where we used to practice when I was 7 and 8 years old,” said Jeff, now 55. “The new school opened up when I was in the eighth grade.

“A lot of things are the same. The roads are the same. Of course, Straw Plains Pike has grown up a lot more now. Back then it was just two lanes. Wasn’t anything down there. The interstate wasn’t even there.

“Those things bring back memories, most of them good,” adds McMillan with a laugh.

Carter opened with a 35-8 win over homestanding Gibbs in that Aug. 27, 1976 game. The Knoxville Journal’s account of the contest said Carter, the defending County champion, jumped out to a 21-0 lead in the first quarter.

Not only was McMillan a place-kicker, he also was a standout defensive tackle for the Green Hornets, who went on to post a 10-1 record, including a Scenic City Bowl win over Red Bank.

Throughout his high school coaching career, McMillan has built a reputation of being one of the top defensive coordinators in Tennessee. He most recently held that position at Fulton, which had seven shutouts under his guidance in last season’s 15-0 Class 4A state championship season.

This season is McMillan’s first as a head coach. He had served as an interim head coach three times at Central when former Bobcats coach Joel Helton was sidelined for health reasons.

“A lot of people up here say the ‘76 team was the best team Carter’s ever had,” said McMillan, “and I don’t know that team could even compete nowadays, with the speed of the game and the size of the kids now.”

Even though he has coached at other schools in Knox County, McMillan has been a lifelong resident in the Carter community. His two sons, Clark and Wyl, played at Central when he was the Bobcats’ defensive coordinator.

Both of his sons are still involved in football. Clark coaches receivers at Fulton. Wyl, who earned a degree in golf course and turf grass management, takes care of the Carter field.

Members of his family, including his two sons and wife, Sharon, who is in her 29th year as a teacher at Carter Elementary School, will be on hand when McMillan makes his return to his old stomping grounds. Former Carter teammates probably will be in the stands too for the special night.