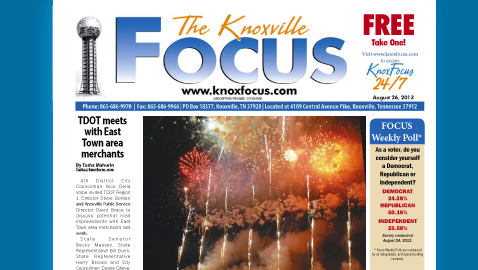 Knoxville Center Mall, located off exit 8 on I-640, has approximately 60 tenants. Additionally, the exit is home to Home Depot, Lowes, O’Charley’s, Cracker Barrel, and a McDonald’s, among others. Economic downturn and increased commercial development in other areas of Knoxville have caused a significant struggle amidst businesses in this community.

Della Volpe began meeting with merchants earlier this summer to discuss the challenges. Merchants identified visibility from I-640 and a lack of signage on the heavily traveled portion of the interstate as key problems.

“With the overgrowth, some 75,000+ travelers per day on I-640 can’t see and don’t know they are driving by a major shopping area,” Della Volpe explained.

The City of Knoxville and TDOT have agreed to begin clearing the brush and overgrowth while preserving the hardwood trees planted as part of the original landscape. City arborist Kasey Krouse also attended the meeting.

“There is no logo sign on the interstate in either direction that indicates ‘Food, Gas, Lodging, and Retail’,” Della Volpe added.

Current regulations only allow for a blue logo sign on only the first interstate exit as you enter a municipality with a population over 100,000. Borden suggested that while they cannot change the federal highway regulation, the area could be branded similar to Hamilton Place in Chattanooga and the road name could be changed to be more descriptive- which would allow for new signage.

According to Della Volpe, a long term solution could possibly include an additional exit ramp from I-640. (The exit currently only has one.) Borden suggested the group formally request an “Interchange Modification Study” specifically to look at the possibility of two way frontage roads, and reworked exit ramps.

Business owners and vested parties are in the process of forming an East Towne merchant group in order to better lobby for needed fixes within the area.

The Focus will continue to follow this story as it develops.