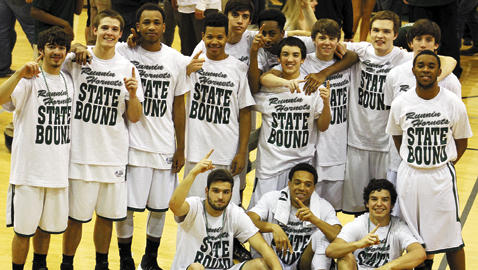 When Carter arrives at the TSSAA Boys’ State tournament in Murfreesboro this week, Coach Joby Boydstone doesn’t plan to change a thing. His team will continue to run and won’t stop until crowned or eliminated.

“Run, press and forget the rest,” said Boydstone when asked what his team’s approach would be at the state. “At this stage of the game, you do what you do. And you leave it on the floor.

“If it’s meant for us to win the state, then, God willing, we’ll win it, and if it’s not, it’s been a heck of a season. But we’re going to go down to the Boro with the attitude (that) it’s one game at a time and we’re in it to win it. If it happens, great. But (if not), it won’t be because of lack of effort on these kids’ part.”

The Hornets have done so much running this season, they’ve been re-nicknamed the “Runnin Hornets.”

They ran Unicoi County out of Jim Williams Gymnasium with an 11-0 run to end the first half last Tuesday night on their way to a 72-57 victory in Class AA state sectional play. After trailing 22-15 early in the second period, the Hornets roared in front 38-29 at the break.

It was the third lowest point total of the season for Carter, which leads the state with a 91.6 scoring average. But, on the other hand, it was one of its better defensive games against a quality opponent. Carter allows an average of 77.5 points per game.

“It seems like all season . . . there’s always someone else ready to step up and do the job,” said Boydstone, addressing the contributions of Woodruff and Blake.

“That’s what makes us – and I say this in a humble way – a good team, because we don’t have just one or two players we lean on. We’ve got eight or nine, sometimes 10 guys, who contribute. And that’s what makes it tough to defend us, because you never know where you’re going to get it from.”

Carter has been to the state twice before but has never won, losing in the quarterfinals to Memphis Booker T. Washington in 2009 and to Nashville Maplewood in 2010.

“I think if we keep doing our thing, and keep running, we have a chance to win it,” said Greene. “I still think we can hit that peak, where we’re playing the best basketball that we can, and hopefully, we’ll hit that peak in Murfreesboro.”

Unicoi County, losing for the eighth time in 10 years in the sectionals, hangs up a 26-9 worksheet.

“We haven’t been able to break through,” said Coach John English. “There’s some good teams down here. Whoever survives Knoxville is always a load.”

The Blue Devils from Erwin in upper East Tennessee used their height and quick, scrappy defense to take a 17-13 lead in the opening eight minutes. Hensley, with a nifty assist from Chambers, scored inside to extend their advantage to seven. Up to this point, the Blue Devils had been successful at slowing the tempo.

But that soon changed.

Greene gunned in a 3-pointer, Bowden drove for a bucket and Greene sank both ends of a 1-and-1 to tie the contest at 22-all.

Dutton ignited the 11-point flurry with back-to-back baskets to put Carter ahead 31-29. In the final minute of the half, Bowden went off. He was fouled making a 3-point shot and converted the and-one for a rare four-point play. He then drilled in another 3-pointer.

Carter cooled off and committed three turnovers as the second half began, and Unicoi County pulled within 40-36.

Blake, fouled putting up an offensive rebound, sank two free throws, then intercepted a pass in the Hornets’ press and took it in for a layup to stretch Carter’s lead to eight.

Woodruff then took over, scoring the Hornets’ final six points of the third period for a 50-40 lead. The Blue Devils could get no closer than nine the rest of the way.

“We had good stretches where we took care of the basketball, but a team that presses you as much as they do and comes at you with such athletes, eventually they’re going to wear on you a little bit,” said English.

“You’ve got to give Carter a lot of credit for making the big shots and turning us over and converting them.

“They’ve got a heck of a team,” added English. “Coach Boydstone obviously brought in a system his kids have bought into. They’re doing a great job with it. It’ll be interesting to see how they’ll do (in state).”